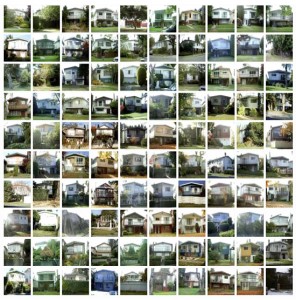 Welcome to “On Beauty,” a series of interviews with poets about their relationship to beauty. (For a complete introduction to the project, see ‘Poets on Beauty.’) I’m kicking off volume III of Lemon Hound with an interview with Sachiko Murakami, poet and editor, whose online interactive projects are experiments in collective authorship. I hope you enjoy her curious mind, dynamic style, and unpretentious approach.

I began by asking Murakami the same three questions I’m asking each of the poets. Here’s what she has to say:

From a. rawlings’ wide slumber for lepidopterists (Coach House 2006), one of the most beautiful books I’ve ever read: 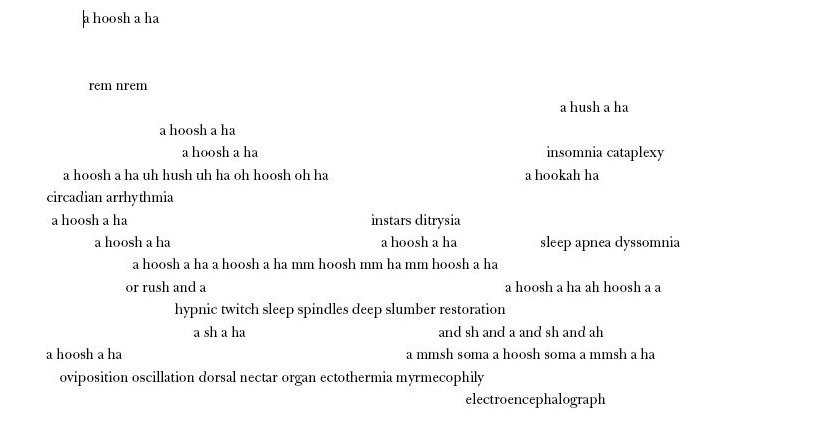 (© a. rawlings, 2006, reproduced by permission of the author and Coach House Books. To connect to the publisher’s catalogue, see chbooks.)

First of all – this is a page, really, rather than a poem, and deserves to be read in the context of the whole book.

Why is it beautiful? Does it please me aesthetically and intellectually (as Oxford tells me something beautiful will do)? It does. rawlings takes a scientific lexicon and mutters it through the sleeping body, the breathing body, in the vague form of a butterfly (one forming in a lepidopterist’s dream?). The poems I find beautiful perform complexity through language – sometimes it is a struggle, sometimes it is a mastery, sometimes it is a sigh.

I’m not sure I have ever found a poem morally pleasing (as Oxford tells me something beautiful might).

Do you hope for, look toward, seek out beauty in your work as a poet? Why or why not?

Would I like to please myself aesthetically and intellectually with my poems? Sure!

I worry about the preciousness of lines and the perfectly uttered phrase. I think sounds-true sometimes sounds messy, sounds grating, sounds bumpy. I hear myself getting lofty and working towards sounds-perfect when I’m writing – you know, poetic – and I have to stop myself from taking myself too fucking seriously. That was the impulse behind the rewriting/rebuilding of poems in Rebuild – to loosen my attachment to the Beautiful.

Well… the last apartment of my dear friend, writer/artist Marian Churchland, is what I think of when I think of beauty in the sensate world. (You can get a sense of her aesthetic at her blog, hchom.com.) It was perfectly tidy, with none of the messy piles of papers and empty gum wrappers and discarded socks you find in my home (all who have lived with me, including my very patient partner, Tim, have had to resort to creating “Sachi-piles” around the house). At Marian’s, everywhere you looked you would see a beautiful, simple thing – a ceramic bowl cradling a few untumbled gems, tidy rows of old editions, a pencil pot on a big bare wood table with a sunbeam shining on it. That kind of just-so-ness appeals to me immensely. Unfortunately I spend so much time in my head and so little time in the world that mostly I wander around dropping things and forgetting they exist: on my bedside table are a stack of used mugs, a book I finished a month ago, three completed to-do lists, Kleenex, chewed nicotine gum… When I manage to get it together long enough to do something like make the bed, I stand back and admire its beauty, bask in how it pleases me aesthetically (perfectly even!) and morally (I made the bed!). But mostly I go wandering through the world with my shirt on inside out.

I do know that I need to seek out and notice beauty. It sustains me – without it, life is a bunch of tasks and chores. I’m not sure I need to capture beauty and reproduce it as much as I need to witness it. It’s a lot of work for me to get myself in a position in which I can receive beauty – my head is a busy, worrisome place, and I need to do a lot of calming and opening before anything outside gets in. When it does, though, and I am able to show up and experience it, the world and its clear winter light and its sleeping children and its vistas and sidewalks has me weeping with gratitude and wanting more life, more life!

[I mentioned to Murakami that I was interested in the difference between her response to beauty in the world (embrace) and beauty in her work (mistrust).  She generously elaborates below.]

I think the difference between “created” and “received” or “caught” beauty is the distinction I’m making here. The beautifully made bed is a bit of a joke – I think it’s easier to catch glimpses of beauty in someone else’s house than in your own because the deliberateness, its arranging, is invisible. So too in writing. When I’m willing to lay my head on the chopping block to be cracked open by poetry, you’ll find me walking from room to room with the book in my hands, shaking with joy at what is happening in me. I don’t stop to think about how I’m being emotionally manipulated by the poet’s artful arrangement, I don’t see the editorial process in which she missed her mark – I am only hit by that final, perfect blow. I just open with appreciation.

It’s being on the other side of the process that makes me a bit more cynical about beauty in poetry. I know what I am doing to manipulate the poem/reader. I remember the messy, ugly bits I snipped and trimmed away. So it’s that awareness that this is all a bit of a trick – a bit of smoke and mirrors and flash and pizazz, the memory of the awkward dress rehearsals of the poem – that I am talking about when I talk about “preciousness.”

Revision, workshopping, the editorial process: all mechanisms to shear away the fluff that a poem doesn’t need, to sharpen its focus, to smooth out the wrinkles, to slough away the dead, excessive metaphors, until it is Beautiful – like it dropped on the page just so, perfect. Precious.

I was thinking about all that when I wrote Rebuild – exposing that process to an extent. Maybe it made for less Beautiful poems. Maybe no one is interested in the mechanics of revision. I have a feeling people are, though, given that over two hundred people have “renovated” poems on ProjectRebuild.ca.

In Rebuild you record four versions of the poem “Vancouver Special,” each a renovation or remodelling of an original (it’s not clear whether one of the versions is the original, which is interesting in itself). The accumulation of poems seem to mimic the growth of a suburban development. In the first line of each version, the phrase “failed attempts at beauty” shows up, most often as “not failed attempts at beauty.” I’m interested in the question of the nature of the relation between beauty and the Vancouver Special (be it poem or sheetrock-and-stucco). Can you say something about how you see it? In two of the poems, ‘beauty’ is capitalized and in two it isn’t – was that a deliberate choice or an effect of random manipulations?  Do these two different versions of ‘beauty’ pose a question about how we approach beauty?

Regarding beauty and the Vancouver Special:

Rebuild began on one of my usual walks through East Van, where a Vancouver Special is never more than half a block away. One night I stopped in front of a Special and thought about all the derogatory things I had heard about them over the years. Ugly! Boxy! Cheap-looking! They all look the same (and not a very nice same, either)! My heart went out to the Special. “Why are you ugly?” I thought.

Rebuild ended up thinking throughVancouver real estate practices in general, drifting fairly far away from my original wonderings about what makes a house beautiful, although some poems in the “Homeowning” section – as well as some in the “Citybuild” section – do think through beauty, class, etc. I’m thinking of “The Agreement Agreement” and “Response.” (These poems are reproduced at the end of the interview.)

As for the capitalization of Beauty:

The four poems were generated by taking the ür­–poem “Vancouver Special” (now lost) and running it through Google Translate in four different languages – Cantonese, Italian, Serbian, and Portuguese (home languages of people I have known that have lived in Specials) – and back to English again. I was interested in mimicking the sameness-with-slight-but-significant-differences that arises when you walk down a street of Vancouver Specials. The differences in the poems were determined by Google Translate, not by me – including the capitalization of Beauty.

I guess the line “failed attempts at beauty” came from that wondering – is the Special loathed because it so deliberately refutes the “beautiful house” equation – by refusing to blend in with its neighbours, flaunting its unrefined roof slope (the narrower the peak, the more refined and restrained the use of lot space), its stucco and brick façade, its windows unadorned by framing? The fact that bylaws were enacted in more affluent neighbourhoods to prevent the Specials from being built brought to mind the idea of taste (and beauty) as issues of class. Interestingly, there has been a recent craze for the Special among wealthy, design-savvy types who renovate and revel in the Special’s cavernous spaces and modernist lines (they sell for +$1-million, these days). Fickle thing, beauty.

Are you compatible with the other homes on the street? Do you bring desirable cultural improvements to the area?

See the patterns we set: can you follow them? Are you willing to civilize your differences? Is your character meritorious?

to align your roof with ours? Are you willing to match our windows? Or entrances, or porches? Is your detailing choice? Are your materials

choice? If we decide, will you designate your building heritage? Will you accept our honour? Will you decline with grace?

Good effort, but keep the sonnet’s slope within regulation limits. This poem would work better if it had six characteristics

in common with its neighbours. Your metaphors (of family, of home) occupy

too much lot space. Trim. Restraint is beautiful. Buyers will be looking for restraint.

Can you integrate a big idea here? This stanza feels “small.” Too “small.”

I feel like I’ve seen this before, and I’m not sure it’s for me.

Sachiko Murakami is the author of the poetry collections The Invisibility Exhibit (Talonbooks, 2008), a finalist for the Governor General’s Literary Award and the Gerald Lampert Memorial Award, and Rebuild (Talonbooks, 2011). She has been a literary worker for numerous presses, journals, and organizations, and is Poetry Editor for Insomniac Press. She is the initiator of the online collaborative poetry projects Project Rebuild and PowellStreetHenko.ca. She lives in Toronto.

(Image by visual artist Keith Higgins, reproduced here by permission. To see more of his work on the “Vancouver Special” click!)