More than We Can Bear

Where you going? To CHURCH?

Our upstairs neighbour, Clarice, liked to hang off her balcony and scream this at me and Lafitte, if we happened to be walking together, wearing black.

I would soon learn this was her only endearing quality.

When he and I moved into the house in Little Italy, we had already had a fight with her.

Through our aggressively friendly landlord, she had demanded full access to our little backyard: I like to have a glass of wine under a tree, is that a problem!?

We won that fight, but it was a pyrrhic victory, as she would go out of her way to make us, more specifically me, miserable for the four years I lived beneath her.

She yelled in the hall about me, sat in her kitchen idiotically stamping her feet for hours, told the landlord my dog should be kept in the basement as his barking was “interfering with my cellular telephone calls!”

She kicked my door if Frank rushed towards it, took up bongos, and slipped into the backyard to practice her Tarzan yell.

I heard her whispering about me—She wears a beard of bees! — and one night, her friends called down, asking me to show them my “curly vestigial tail.”

When Lafitte left I got all skinny and coke-jittery. She asked me what was going on the day his moving van appeared and left with everything in the place.

He left me, I told her, and wandered back to my empty room with the marks on the wall where his things had been.

The next morning, I found a little azalea outside my door with a note.

It said, God never gives us more than we can bear.

I turned it over in my hands, wondering at how people so often surprise you.

I knocked on her door, and when she answered, I smashed the plant in her face.

He just did! I said.

Brian and I met at Steve’s funeral, though I do not remember. He told me how we reached for the same limp slice of cheese, and re- treated, as if the cheese were an explosive. He told me he sang a song there too, and read a poem.

I don’t remember anything that happened after laying flowers on the coffin. I had stood there for a long time, fretting about the Y-incision on Steve’s chest that was a meadow of flowers; about his green eyes, spooned from their sockets.

These disgusting thoughts are fused with my memories of Brian.

I spent the days before he visited cleaning and having panic attacks.

I am grotesque, I warned him. I have Kuato growing out of my stomach. Kuato, the leader of the rebel army in Total Recall!

When he finally showed up, I saw him through the window and fell to the floor and told my dog it had all been a terrible mistake.

I got up and said hello. How can someone have acne on their teeth? I thought. Then, later, after too much bourbon: He is made of wax. And, why is he walking around in his enormous underpants?

Let’s leave Steve, you know, in his grave, man, he said, then asked for pizza money. And, cupping his tiny genitals in his hand he ordered an extra-large Hawaiian, later rolling each slice into a juicy pineapply cone.

I ended up throwing his plate against the wall, which enraged him, and as he stampeded, it occurred to me to try to change my life. He called me the next day and said, Never a dull moment with you!

I called back from the Value Village while tossing a black rayon skirt on the counter and said, I feel we are too different. You live in your mother’s basement, I do not. I have a job, you take anti-psychotics. I mean, I could go on and on, I said.

The week we met he text-messaged me every morning and called me “Babies.” Then, “Angels angels angels!”

The thought of someone loving me is freaking me out right now, he said.

As if my isolation were a footnote to his.

I took a pair of scissors and cut him off, like a price tag: “AS IS!” He snored like an aging dog dreaming of grey, stunned squirrels, and it is hard not to miss him when I think of him almost here in a taxi and the Pixies playing and hope, that charlatan, blooming like an illness inside me.

Michael Jackson Was My Lover

It is hard for me to believe, also. So much so that I wrote my love story in Portuguese, in the manner of Elizabeth Barrett Browning, the famous English werewolf.

That is a dependent clause that makes my heart clutch.

Something happened in Los Angeles, when he stood with his arms extended like Kali (I meditate on him raimented with space), and the sails of ancient ships opened, reaching forward.

I looked good; someone told his friend that I was holding, and the rest is a love sonnet about wild animals.

During our time together, I took rhyming note of what hot, huge muscle pressed where; how did he seize me, what sounds did he make. On occasion, I used these indiscreet metaphors: an ana- conda, a panther, a dove.

But I never could explain all of him, standing on his toes, his hips like claw hammers in my ribcage, starlings there also; that he smelled like something growing in the warm, wet ground; that he was liquid and motion and wildfire.

This happened in a broom closet. I knocked over pails, and barrels of industrial cleaning solvent.

You are like the white butterfly that alights, in early summer, on the flowers and vines, I said.

He untaped his fingers and closed my mouth with the bands. He ripped open his white shirt and unbuckled his black bondage pants, which fell to the floor in a crash.

He made me promise never to tell what happened next, which is why I keep naming the animals, and then I feel each of my teeth being extracted with a clam-knife.

I got to see him dance, what was that like?

It was like watching the last living creature on earth collide with a spaceship.

He sent me a card from Bangladesh that read, Thinking of you. On the card was a picture of his brothers performing; of him, some distance behind them, quietly on fire.

He would send me things for years. Popcorn shaped like people, including J. Edgar Hoover and Minnie Riperton. A draw- ing of a dead cat in a sombrero. Tiger-striped Sally Hansen nails; a porcelain baby in a white velvet wetsuit. A string of wooden beads, tortoiseshell reading glasses.

I read that he had been ill, and someone asked him who to call. There is no one, he said.

There is someone, I always wrote, on my packages of pink makeup sponges, paper cranes, or Robo-Fan, a robot-shaped fan.

But I have said the same thing, and I understand.

The last time he wrote, he sent me a list of names he liked, including Prince Michael Infinity and Small Pillow. His signature crawled toward the card’s end and collapsed like a victim of violent crime.

I do not know if he read my letters about choosing a lighter lipstick shade, maybe plum? About eating better, and purdah, and every spring, the robins singing go bird go.

The day he died, I was at a bar called Sin and Redemption with my students, after our last class. One of them got a text and said, Michael Jackson is dead. I think he is, she said.

What will I do? I asked them.

On the way home, I checked the news and they said he was in the hospital. He will be okay, I thought.

I looked at my emails and they all said MJ Dead, or Jacko!

I wrote about him, an article that someone would call the “maudlin ravings of a nightmare spinster.”

And Frank and I watched CNN all night. I saw so many images of him dancing beside the words MICHAEL JACKSON DEAD.

I took a shaky photograph of my television as if I had seen a monster in the forest.

He burst out of his skin and became a ravenous wolf: there are scars.

He kissed me like a child, later, and thanked me.

Not too long ago, a man yelled, Move it, Fatso, as I laboured across the street.

Hold your head up high, Michael said. Say, I know I am some- one! It is hard to do. I just walked home slowly, and sat quietly, my head in my hands.

I believe in you, he wrote, on thick, creamy Shangri-La Hotel stationery. He drew us holding hands and hanging off the top off the Burj Dubai, our mouths wide red Os.

I watched his body in a bag, hitting the road.

I was holding the walnut he sent me, with a diorama inside — of him, on one knee, extending red roses.

My hand pressed flat on the screen, only electrical fuzz be- tween us.

No one can hurt you now, I said.

I felt that this was true. I felt it with such passion it was like making a pearl.

I cultivated a pure memory of him, of me, moving in a circle, saying Eu te amo like we were saying grace as his legs snaked around mine and I fell down where heaven is, surprisingly.

It is down there. 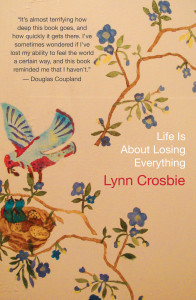 Lynn Crosbie is a cultural critic, author, and poet. She teaches at the Ontario College of Art and Design and the University of Toronto. Excerpts from Life Is About Losing Everything posted with permission from Anansi.