“Tell me where we can go / to be alone and have some kind of communion” Aisha Sasha John asks in her debut poetry collection. The answer, which appears in the poem as a refrain, is “The Shining Material”—the title of the book as well as the poem. The poem is a call-and-response piece, and this phrase is the response to everything; for example: 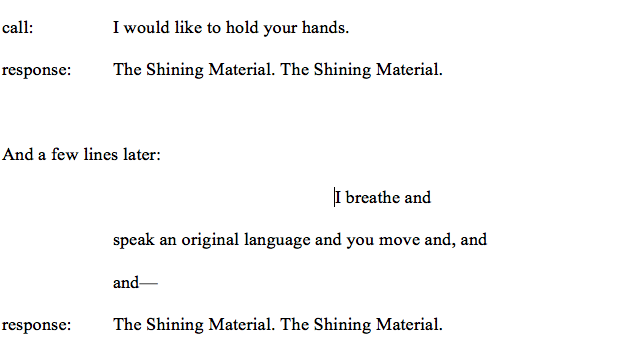 If you are reading the poem with a healthy degree of situational awareness and an openness to humour (an awareness and openness that John’s verse encourages) it might seem that the repetition of this phrase is tongue-in-cheek book promotion, with the poet presenting her collection as a balm to the reader’s every physical and spiritual need. Like all good one-liners it contains some truth—perhaps more than we initially recognize.

The word “material” is an interesting choice for a universal remedy. I think automatically of Madonna’s “Material Girl,” for whom material problems demand material solutions, though it has been our culture’s habit to classify major life dilemmas as spiritual, emotional, or otherwise abstract. More direct influences on John’s project might include Gertrude Stein’s language-breaking objects in Tender Buttons or Lisa Robertson’s descriptions of memory as fabric in Occasional Work and Seven Walks from the Office for Soft Architecture:

The knitted cap on the wrinkled skull of the mewling kid is the first boundary. At the other tip the bootie dribbles. There are curious histories of shrouds… Memory’s architecture is neither palatial nor theatrical but soft.

All of these sources ask what the relationship is between objects and their mind-effect, and John’s book takes up this question in its own way. As the title poem suggests, the question begins with the book itself—a material object in one sense, but one that offers communion to people who are alone. Yes, you at your laminate desk, and I in my cat-hair sheathed, ugly pink chair, separated by both space and time, are sharing ideas. Just because the miracle is commonplace doesn’t make it less strange.

I loved holding hands with this book. When I got to the end I turned back to the beginning. I did this several times (spontaneously, it is worth noting, before I thought I was going to review the book or say anything about it in public). It is seldom that a book of poetry compels me to this degree. One reason is that John has created a remarkable voice, one that resonates on its own register and feels, in a certain sense, new. John’s I operates in a mode that might be called visionary if it weren’t tempered with self-conscious irony (“also, I wanted to see about being holy”). It is interested in beauty, but more especially in the grey zone between attraction and repulsion (“like bark, warts on his face on his / legs colonies of warts many inches long are his feet. / where are his hands?”). And like all good storytellers, it is interested in cruelty, both minor and significant, experienced and enacted. “Self-Portrait Housed,” a poem in which the speaker rummages through a woman’s house while remarking on its contents, traces a fine and humorously rendered line between empathy and aggression: “I believe I know her credit limit. It’s laughable. What she could do more with is control and her place, her / place betrays her. Three pairs of mittens not one of them / matching not one.” The two emotions are all the more difficult to parse because of the possibility—slim, perhaps, but never eliminated—that the house is the speaker’s own.

What strikes me in particular as unusual about John’s voice is its curious relationship to the biographical self. On the one hand, the book is set up as a kind of autobiography, consisting largely of self-portraits and a series of poems referred to as cahiers—ostensibly extracts from a personal journal or notebook. Many of John’s anecdotes seem literal (memories of smoking a first cigarette as a teenager, or of getting braces or visiting a cemetery), and there is sufficient concern with transmitting physical experience, particularly female physical experience, that Lisa Robertson refers to a “biopolitic” in her blurb of the book. Reacting, I imagine, to the journalistic qualities of John’s verse, the poet rob mclennan praised the poems as “notes…to the self, quickly written down, quickly caught.”

But there is a problem with this assessment, and the problem is what makes The Shining Material so interesting. John’s eminently relatable, apparently literal anecdotes slip quite seamlessly into mythology and surrealism, and the self that at one moment seems to be writing out of a straightforward impulse to commit experience to paper, the next moment is doing something that only makes sense symbolically, formally, or conceptually, if it makes sense at all. In a poem about returning home from a trip to Brazil, John writes “I was going to get my ignorance ripped from me so I cradled it/ and shutting my eyes it fell / out of my mouth…” This somewhat logical reference to a gaping mouth (which could belong to a person aghast) gives way to a new kind of mouth, whose literary purpose has no easy real-world corollary: “the new sight just poured into my mouth, so when / I turned around swiftly it fell out / and so did a bunch of / other things…” Even if what’s being described here is speech, the reader’s attention is with the falling objects. John slips just as easily into literary allusion, fluently and without fanfare. The poem “Cahiers, Juillet à Août 2008,” may be, as the title suggests, a personal diary from July to August 2008, but it is also a reworking of the myth of Apollo and Daphne, told in percussive verse, with the wolf from Little Red Riding Hood thrown in for good measure as a postscript.

In other words, if the poems are driven, on the one hand, by an impulse to reveal the self and to “capture” an experience of reality, then they are equally governed by an inclination to linguistic experimentation, literary collage, and a wild expressionism that all but runs away with that reality. The confessional revelations of self are continuously swayed and pressured by the book’s boundary-pushing exploration of the concept of self. What does it mean to write one’s experience and body into literature? What happens to a person when metaphor, irony, humour, allusion, and the sonic contortions of poetry are brought to bear on her experience? What is happens to literature when personal experience continues to intrude? The Shining Material is not the only book of poetry that raises these questions, but, for me, it is the only one in recent memory that explores them so deliberately, daringly, and with such structural grace.

Here is one example of structural grace. John’s poems are populated with playful physical descriptions, rendering gestures and body parts elliptically, impressionistically, and often with humour. A smile (or perhaps a grimace) is described as “that’s quite a something when you draw them back / and it’s teeth teeth teeth teeth / your mouth looks full of cloud.” Brows are variously “unbrushed,” “thin as / rock salt,” and even “drunk.” Over the course of the book, the recurrent attention paid to certain body parts elevates them to the status of leitmotifs, so that we recall at the mention of a mouth or hand or breast the previous mouths and hands and breasts, and consider these alongside each other and alongside other, non-bodily recurring images. (The most striking of these, to me, were clouds and machines, which recur pervasively.) Taken together, the images build a new, literary body that quickly becomes impossible to reconcile physically (except perhaps as a cubist blur) but that resonates emotionally, gesturally, and linguistically. The physical self gets unmade to become the literary self, which is a kind of cyborg, incorporating elements of the atmosphere and the machinery of language, in addition to a dizzying array of images.

Poems such as “Self-Portrait Fertile” and “Self Portrait as Rat” explore this juncture between “real” self and machine self explicitly. The latter poem lends an almost video-game-like quality to the speaker, who dies and instantly comes back to life:

one year passed my machine

you show too much natural breast:

may I help you?

But nowhere is the unmaking of the self so evident as in John’s voice, which slips in and out of embodied perspectives, sometimes addressing us as “I” or “we,” and other times seeming to address itself from outside its own body. At certain points it seems to stand in for the voice of the reader or the voice of an abstract concept such as television (as it does in the poem “Have You Ever Watched Television?”). These outside voices aren’t adopted in the clear, theatrical manner that other writers adopt “the voice of television” or the voice of an invented character for the duration of a poem or series, but in a slippery way that suggests these other speakers are in fact continuous with John’s own voice. In the quote above, the speaker “dies” and immediately begins speaking again, this time as the voice of “human resources.” The voice of the self is also the voice of the world the self encounters.

That John accomplishes these ventriloquist manoeuvres while remaining comprehensible is impressive. That she is also approachable, engaging, charismatic, and candid enough to be mistakable for a straightforward poet of personal experience delights and perplexes me, and causes me to wonder if John has perhaps found a new role for biography in conceptual poetry, or a new and more rigorous method of recording life. At the very least, she is animating a role that hasn’t been filled in quite a while and distance, according to my bookshelf (everything is always according to one’s bookshelf). You would be wise to add John to yours now and plan for the section to become fat.

Helen Guri is a contributor for LemonHound.