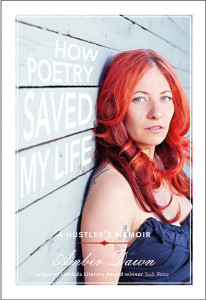 Given the task of writing a lecture on women and fiction in 1928, Virginia Woolf, while searching for first-hand historical documentation of women’s lives, found herself “looking about the shelves for books that were not there” (A Room of One’s Own, 45). “All these infinitely obscure lives remain to be recorded,” (89) and she encouraged women to begin the task.  Woolf suspected that given a fighting chance, with money, education, access, and an undisturbed place in which to write, women could do the work of writing.  Currently, we’re certainly not lacking in documentation, and we’re not lacking in examples to follow, yet there are still a multitude of stories to tell.

Woolf thought that novels “without meaning to, inevitably lie.” (89) Of her novel, Sub Rosa, Amber Dawn says that at the time it was “the closest I’ll get to writing an autobiography.”  In her new book, How Poetry Saved My Life, Dawn has removed the obfuscating fictional and fantasy elements in a push towards a cleaner truth. Through prose and poetics she has created a more starkly personal document, saying “if comfort or credibility is to be gained by omitting parts of myself, then I don’t want comfort or credibility.”  Yet credibility is exactly what she advocates: “the written word can be a faithful witness/ if you’re willing to show yourself.”  While women now have produced a multitude of documents, Dawn knows that each new voice is full possibilities.

but this emptiness you’ve come to know is fertile

soil that waits for fireweed and milk thistles,

but until you, fabulist, have spoken

As a Vancouver prostitute in the 1990s, Amber Dawn lives in a world less documented than reported.  The spectre of the Pickton[i] murders hangs over the narrative (see also Nancy Lee’s Dead Girls), and Dawn acknowledges all the stories that never got told in the first person.

There was a missing women poster

wrapped around a telephone pole …

by 1999 all the cars cruising the kiddie stroll had power-

four years younger than I am,

As Woolf noted, women “are, perhaps, the most discussed animal in the universe.  … Woman attracts agreeable essayists, light-fingered novelists, … men who have no apparent qualification save that they are not women” (26-7).  For every Nelly Arcan, there is a Chester Brown Paying for It.  In a scene with a violent client, Amber Dawn attempts an escape, but notices that her phone has been left behind.  She needs to go back and retrieve it, lest he call her contact list.  “It’s not that I’m ashamed,” she says, “it’s just that this—pardon my language—fuckwad does not deserve the chance to tell my story.  He has no right to reach the people I know and love.”  This idea is relatable to the whole project of How Poetry Saved My Life; don’t let the fuckwads have your story.

tory.
A WOMAN MUST HAVE MONEY

Why did men drink wine and women water? Why was one sex so prosperous and the other so poor? …  And women have always been poor, not for two hundred years merely, but from the beginning of time. Women have had less intellectual freedom than the sons of Athenian slaves.  Women, then, have not had a dog’s chance of writing poetry.  (25, 108)

Virginia Woolf proposed that a woman be independently wealthy to facilitate her writing, just as she was.  Certainly, Woolf was not wrong to intimate that working for a living is a distraction from producing art.  Most women, however, have to work. Amber Dawn’s field, before becoming published author, is prostitution.

This is the one industry where women earn more than their male counterparts.  Female sex workers can earn more per hour than at any other entry-level job.  This gender bias, unique to the sex trade, has provided unwed women with financial security and opportunity since ancient times.

It’s important to note that Dawn appears to have chosen this work.  Of how and why she made this choice, Dawn is purposefully less clear.  How Poetry Saved My Life is “my attempt to tell—not confess—a selected few of my truths.”

In writing, “money dignifies what is frivolous if unpaid for” (65). But in sex it is just the opposite.  “The product is sexual fantasy, which differs from other products in that the buyer wants to be an uninformed consumer. ”  The money Dawn makes —for the most part from male clients — is her living, pays her tuition, and allows her to financially assist the women she loves.  Using this money in relationships with her romantic partners causes tension as they attempt to act out a butch-femme dynamic, where as the femme Dawn should be “taken care of.”

That she chose to spend her earnings (partially) on tuition makes Amber Dawn a “credible” sex worker to those outside the industry.  “The admissible excuse for being a low, demoralized woman is survivor heroism.  She should have a past tough enough to explain her bad choices.  She must spend her earnings on education, not on drugs or so-called frivolous things.” Dawn only gets to speak, to write books, to have an audience, because she is a “nice girl/such a smart girl/an exceptional girl/a girl with such potential,” a white girl, a girl who exited the sex trade at an appropriate time.  “I do represent something much larger”; she is the one that the world will listen to, so she has to start talking.  Visibility only begins with sex workers like herself.  Never once does Amber Dawn let you think that the narrative ends with her, and she takes every opportunity to remind the reader that her story is a beginning, a thin crack in the ice. Ultimately:

This is not really about sex work. … This is about the labour of becoming whole and letting yourself see a wider panorama.  It’s about allowing yourself to listen to broader conversations—with your voice included—to visit the places that have be made silent or small or wounded. … You are invited to do this work.

AND A ROOM OF HER OWN

Amber Dawn is roughly my age and we’re both dedicated to an unnaturally red hair colour.  I look at her face on the cover of How Poetry Saved My Life and she’s me, except I chose working at a 7-11 to fund my undergraduate degree and tiny apartment. That’s not a value judgement. I got paid very little at that job. At the time I remember thinking that I could just start stripping so I could work fewer hours and do more homework. I thought that all sex work took was enough courage.  That was probably an extremely naive view of things.

I remember so well the feminism of the 90s; the Sassy-induced feeling of possibility, the idea that photocopying zines and yelling into megaphones in your subversive outfit of babydoll dresses, smeared lipstick, and Doc Martens could get results.

write them on your stomach in black marker and dance

in your underwear at punk rock shows

get on stage get on the radio

talk back to the men that whistle at you win arguments

shout into the megaphone

The 90s were the dawn of third wave feminism, and with that came ideas of inclusivity and intersectionality.  And yet in the 90s Amber Dawn the sex worker was still outré.  A second wave hangover said to sex workers that they are simply “servants of the patriarchy.”  What got me thinking about How Poetry Saved My Life in conjunction with Woolf was the idea that there was no figurative “room” for Amber Dawn and her ilk in identity politics.  She had the money, but she had no space she could call her own within a movement that ostensibly should have been there to help her get it.  There was slut pride, but there was no “ho” pride.  You could give it away, but you couldn’t charge for it.  You could like it, but you couldn’t profit from it.

I learned the power of identity—the idea that even an uneducated woman, like myself, who hadn’t read Mary Wollstonecraft or bell hooks, could be an expert on feminism simply because of her identity as a woman.  Phrases like “as a woman of colour” or “as a lesbian mother” qualified every opinion in the collective. I was the “bad” sister. I wore a mini-skirt and had scraped knees in a room full of sensible pants and makeup-free faces.  The collective also taught me that sex workers … are “servants of the patriarchy.”  I learned immediately that the phrase “as a sex worker” is not met with the same gravity as other women’s qualifiers.

Dawn tries to hyphenate her way into being within her lesbian relationships, as labels become increasingly politically important. To participate in identity politics, one needs to formulate some kind of identity.  For Dawn, these qualifiers existed outside her profession in order to be recognized. “This was our behind-the-eight-ball butch-femme. Ours was an elbow-grease, adult-children-of-alcoholics, there-ain’t-no-such-thing-as-a-free-lunch butch-femme.” In meetings and collectives, Dawn finds that activism skips over human stories, forgets the doing amid all the talking, and that politics are inherently inhumane.  How Poetry Saved My Life is an attempt to carve out that room, for herself, and anyone who would come after her.  “Survival may be the most radical thing I ever do.”

[i] Pickton is used in this essay as a nationally recognizable symbol of the violence done to sex workers, though he is certainly not the only perpetrator of such.

Heather Cromarty received her B.A. in English from the University of Calgary and promptly moved to Toronto, where she’s lived for over a decade.  She is a reviewer and critic for Lemon Hound, Quill and Quire, and The Globe and Mail, among others.