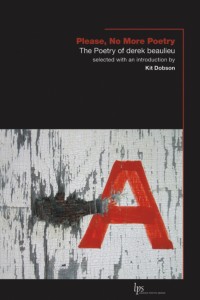 With the release of Please, No More Poetry: The Poetry of derek beaulieu (edited by Kit Dobson), beaulieu has become the youngest author to have a collection published as part of the Laurier Poetry Series to date. This feat comes at no surprise. beaulieu’s accomplishments­–if you somehow don’t already know–are prodigious. Hailing from Calgary, beaulieu is recognized as one of the country’s most accomplished experimental writers; he has published five books of poetry, three books of conceptual fiction, over 150 chapbooks, and his papers are being collected at length by Simon Fraser University. As the editor of No Press and House Press he is responsible for publishing some of Canada’s most challenging and beautiful literary ephemera today. And finally, pushing beyond the boundaries of the book, beaulieu’s work has appeared in galleries across the western world, including his recent and first major solo exhibition at the Niagara Artists Centre in St. Catharines, Ontario entitled HOW TO READ.

In bringing together Please, No More Poetry, the book’s editor Kit Dobson has presented a selection of beaulieu’s work that demonstrates the diverse panoply of strategies beaulieu has used in creating his texts. Here we are given the opportunity to revisit and revel in some of beaulieu’s most celebrated work. The selections include excepts from his first trade book, with wax, the still startling concretism of fractal economies, an unpublished version of local colour, and never before seen work like extispicium. The result is an engaging cross-section that offers beaulieu’s longtime readers a chance to revisit and rethink his practice while offering new readers an opportunity to explore a variety of innovative linguistic tactics.

While reading from front to back, flipping back and forth, revisiting familiar works and reading new ones for the first time, it is clear that beaulieu’s aesthetics and politics have changed over the years. beaulieu’s approach to his medium shifts from works like flatland–a work of mechanical writing that traces each letter of the alphabet’s occurrence over each page of E.A. Abbott’s original novel of the same name; How To Write–a collection that employs various appropriative techniques to create a series of short fictions; and chains which showcases some of beaulieu’s infamous letraset-based visual poems. Despite these seemingly dissimilar practices, beaulieu’s work is often united by his interest in materiality, creative acts of reading and writing, and the subversion of traditional forms and values. In his introduction, Dobson writes that “the truly radical act […] may well be to continue to work within a medium without using the medium itself” (ix Dobson). Indeed, looking back to beaulieu’s essay “words after words: notes toward a concrete poetic,” this may be an apt description of beaulieu’s linguistic ambitions. Building on Sianne Ngai’s theories of disgust, beaulieu developed a theory of concrete poetry as a practice that “momentarily rejects the idea of the readerly reward for close reading, the idea of the ‘hidden or buried object,’ interferes with signification & momentarily interrupts the capitalist structure of language” (beaulieu). Much of beaulieu’s early work explores this territory.

Considering these early radical declarations, it may come as a surprise to find beaulieu moving toward a more classically inflected concrete poetic. In the afterword to the selection, beaulieu, in conversation with Lori Emerson, invokes the modernist concrete poetry pioneer, Eugen Gomringer, who argued that “[h]eadlines, slogans, groups of sounds and letters give rise to forms which could be models of a new poetry just waiting to be taken for meaningful use” (qtd in beaulieu 69). Looking towards a poetry that has the meaningful functionality of airport and traffic signs, beaulieu agrees that poetry “should be so lucky” to be read in this way (69). Perhaps you can hear a cry from the self-identifying radical poets. Shouldn’t poetry make us see or feel different? Shouldn’t poetry respond to the systems and architectures that encapsulate us, denigrate us, and push our medium to the outskirts of relevance? There are no short and sure answers to these questions, but this was the sort of sociopolitical ambition that was at the heart of beaulieu’s early work.

By re-orienting beaulieu’s politics in such an explicit way, Please, No More Poetry becomes a more engaging book than a simple celebration of an author’s work and accomplishments. It becomes a vital and engaging crossroads where these seemingly opposing sociopolitical fronts can meet and battle it out–the radical anti-capitalist disruptions of a poetics founded in disgust versus what Marjorie Perloff refers to as a poetics that is “ideologically suspect” because it is “too empty, or too pretty, or too much like advertising copy” (50). This is a crucial debate to be having when, with increasing frequency, poetry is declared to be a dead art form. While some writers rush to defend poetry’s relevancy (including writers on this blog), others denounce it as wholesale fodder.

The debates around poetry’s relevancy, value, and meaning are the focal point of the collection. These problems are suggested to the reader before they even open the book: Please, No More Poetry: The Poetry of derek beaulieu. The mouth that issues this grand plea has a tongue rubbing against the walls of its cheek. What does this book produce? More poetry. Please, No More Poetry is a crucial collection that not only looks back on a brilliant career, but looks toward the future of the medium itself, offering a sampling of innovative writing strategies and seeking a place for poets that is relevant, valuable, and meaningful in the contemporary world.

Perloff, Marjorie. Unoriginal Genius: Poetry by Other Means in the New Century. Chicago: U of Chicago P, 2010. Print.

Eric Schmaltz was co-curator of the Grey Borders reading series. He will begin graduate work at York University in the fall and will be a regular contributor to Lemon Hound.