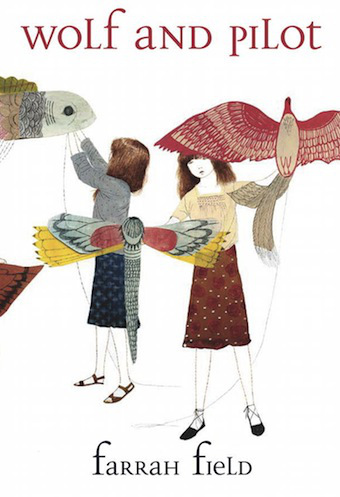 There are states of heightened awareness in which the smallest stimulus can set you off—when nervous or frightened, when being tickled, during laughing fits. Farrah Field’s poems create worlds this taut, trembling with tension; reading them, you enter such a state, you are inclined to hold your breath.

Field’s second book, Wolf and Pilot (Four Way Books), is a series of narrative poems about four quasi-runaway sisters, their mother (a witch or simply witch-like), and the detective she hires to find them. The girls have disappeared, but their signs are visible everywhere; have they really gone? In this eerie, fairytale landscape, rich with the poignancy of details specific to one’s own childhood—“We like apple butter … We want our tongues blue with lollipops”—Field has found a setting and cast of characters that serve as objective correlative to the poet’s sister’s death. So the subject is similar to that of her first book, Rising, but the obsession is transformed. If Rising forced you to confront tragedy head on, wincingly, Wolf and Pilot shows you only oblique glimpses, through translucent colored glass.

I want to talk about the last poem in the book, which was the first poem in the book I read. Then I started back at the beginning, and kept returning to it as I read, to see how the cumulative effect of the other poems would change it. Even without the context and weight of the preceding narrative, it’s a moving poem (moving—such a queer, vague word for a rather specific emotion), with a crystalline exactness that recalls Mary Jo Bang’s work, especially in Elegy. Here it is in full (“Dale” is the girls’ family name):

We open the grassy door
of the future. Our eventually
dead mother jack-in-the-box

sweeps the woolen floor.
In this room we learn
what people really thought

about us, the result of all
those pizza dinners, time with
Nicole, Eli, Boogie, where

a nest was,
and how the space
our sister took was never

reoccupied. In the future
we are further along
without her, lick one

of the other’s nostrils,
then tie a leather string
for orange bracelets.

We sit on woven chairs
inside, think of our own
time better for its sameness,

and right when we think
there was a past meant for all
four of us, with feathers

and less junk, the little
future is gone and we’ll
never remember what

on our laps its softness,
a linen box that holds bowls
of warm ropey noodles.

In the book’s closing notes, we learn that the first poem’s details are based on a Narcissa Thorne diorama. It makes perfect sense that Field would find inspiration in dioramas (from the Greek roots di-, “through,” and orama, “that which is seen, a sight”), because the poems in Wolf and Pilot have the feel of a scale replica—perfect and delicate like dollhouse rooms. And in “Dalebound,” there’s an embedded effect: We watch the dolls peer into their own diorama, a miniaturized view of the future.

What are Field’s dioramas made of? Words, of course, and stanzas (Italian for “room”). But also textures—grass, wool, leather, linen. And references—the word “dalebound” is borrowed from a Ross Brighton poem. And Dickinsonian feathers—hope is usually reserved for the future, but these girls look for hope in their past. (Outside of our unreliable memories, the past is as gone to us as the future.)

Every particular makes sense within the box, with its one open wall for us to peer through (“Someone’s always watching,” Emaline says, “but never where you think.”). But they have uncertain reference to the larger outside world. Do these objects represent reality, reflect and refract it, or does life imitate art? (“We are the girls,” they say. “Everything in the world points to us.”) In our world, up a level, “just like heaven” is a reference to The Cure, but does The Cure exist in the world of the box? Probably not—though the box does have pizza and friendship bracelets, other paraphernalia of pre-teen sleepovers. The girls are older now, old enough for drinks, but not too old to indulge in funereal fantasies, where one discovers who really loved you, and if you’ll be missed.

In Wolf and Pilot, Emaline, the third child, who was in love with the detective, is the one who dies, via some kind of spell or a suicide, creating the hole that is “never reoccupied.” Size is always important in these poems, is often the point (“Their tiny lives, tiny as wrists”). And in mourning, the girls and their world become even smaller:

Walking around a grieving household

makes you think it could be picked up

in the palm and put in the oven.

Come on, little house. Say something.

Elisa Gabbert is a regular contributor to Lemon Hound.