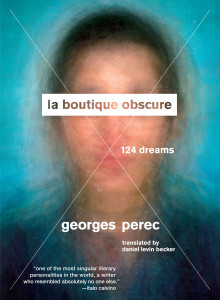 La Boutique Obscure is a translation of the dream journal kept by Georges Perec between May 1968 and August 1972. Perec was one of the more prolific members of Oulipo (Ouvroir de littérature potentielle—roughly, the workshop of potential literature), a loose group of mostly French experimental writers whose collective work revolved around a close engagement with questions of literary form. They held literature to be the product of constraints put upon writing—the rules that make a sonnet a sonnet would be one example, the use of character, plot and setting in a novel would be another. The Oulipo project was twofold: first they rethought existing literary forms in terms of the constraints already operating within them; they then began to devise new constraints and new potential forms for literature to take.

Perec joined Oulipo in 1967, seven years after its founding. His best-known book is La vie: mode d’emploi (translated as Life: A User’s Manual by Devid Bellos in 1987). It was composed using several interlocking constraints. It is set in a Parisian apartment block and the narrative moves within it, from one room to another, as if it were a chessboard knight, and for each room Perec systematically produced a list of items to be mentioned in association with it. Another of his novels, La Disparition (translated as A Void by Gilbert Adair in 1994), was the inspiration for Christian Bök’s Eunoia—its only constraint is that it does not contain the letter E.

La Boutique Obscure is, in contrast with these fantastically convoluted exercises, a much simpler book. Perec’s constraint for this book was to transcribe his dreams as literally as possible. There is no effort at interpretation or assertion of meaning, there is only the dream, its rhythm, its cadence; one event following another with absolute certainty and without any apparent awareness that it has strayed deep into nonsense. I have been playing with transcribing my own dream life (in part, this is why I am interested in this book), and there is something uncannily familiar about how these transcriptions feel. They are visceral reminders of my own dream life.

P. and I are living in the building on rue de Quatrefages, at the very back of the yard, no longer on the fifth floor but on the ground floor. We are living separately, which is to say we have separated our apartment in two. After some complicated construction, we even end up sharing the apartment with our neighbour. (22)

This is a sense of familiarity that diminishes as the book proceeds. There is an increasing textual sophistication to the transcriptions—they become longer, more coherent, more narrative. They start to sound like Perec: they take on a certain unmistakable precision that I have come to associate with him. They become more exact and playful, increasingly fascinated by tasks being performed—the more complex, the more skillful, the better—and aware, in the lightness of their touch, of their own absurdity. I am always left with the feeling that Perec’s is a writing motivated by joy and untouched by any pretensions of its significance, and this book is no different. It is interesting, though, that this is not how it begins. It has to become this.

I’m visiting a house with the bartender from a bar I go to often. There is a glass wall, which is trembling. The bartender explains: it’s because it’s in contact with the metal posts of the awning. There is a clogged sink. To unclog it, you first have to fill another: thanks to some sort of system of communicating vases, the flow of the normal sink will enable the flow of the clogged sink. (223)

When I was an undergraduate studying Freud, I was told an apocryphal story about the effect of reading The Interpretation of Dreams: that those who read it will start to dream the way it describes dreaming. It happened to me, and I suspect something similar happened to Perec after four years of sustained attention to his dream life. This is, perhaps, one of the most interesting implications of the book: that the unconscious exists within a dynamic relation to consciousness, and that it is therefore possible to extend the discipline of writing to it in some way.

Which is, I would say, what makes the book such a good example of the Oulipo project. It is without the extravagant complexity characteristic of Perec’s better known books, but it illustrates one of the most important theoretical principles informing the work of the Oulipo writers: it is not just writing that is modified by literary constraints, it is also the consciousness that engages with it. To change the way we use language is to change what we think, what we are—and, as Perec discovered, what we dream.

(And I want to add to all this, as a footnote of sorts, that I feel I read the book too quickly. I would have been happier to be reading without the constraint of writing a review after. I would have liked to have taken longer, to read one or two of the transcriptions at a time and let them settle into me like that, as distinct texts that only happen to be gathered together into a book. As is, I read them one after another and the coherency of the book asserted itself over the particularity of any given moment within it. I am not left with an impression of any single dream, I am left instead with an aggregate sense of Perec’s dream life. And this does not feel entirely right to me.)

___
Alan Reed is an experimental writer turned novelist. To that end, he is the author of one novel so far—Isobel & Emile (Coach House, 2010)—and is at work on another. He lives in Montréal.