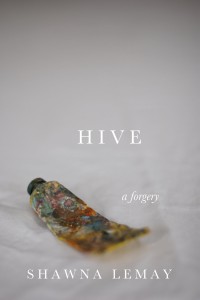 To say that Shawna Lemay’s poetic prose in Hive: A Forgery reminded me of Elizabeth Smart’s By Grand Central Station I Sat Down and Wept may be to invite a weighty – or overblown – comparison of Smart’s classic to Lemay’s more recent text. Such a comparison may be unfair for all kinds of reasons, but the two texts have more in common than their experimentation with poetic prose, although in some ways that hooky, ecstatic language is enough to encourage the comparison. Both books display a consciously romantic hyperbolized style that spins out the trope of the female artist as both performance and disappearance. Both offer a fictive autobiography in which the female artist is larger than life, appropriating and remaking the history of art as a tool for erotic subjectivity and artistic assertion, including the over-riding self-consciousness of the pleasures and the high cost of self-fashioning. Lemay does not hide her dalliance with forgery as a private process that is as obsessive – and as mercurial – as erotic love: “How to interpret her? Trust the prayer of her. I interpret her, interrupt her” (211). The interruption of the narrative from forge to “Forage. Foray. Fray” encourages the movement between those actions even as such wordplay makes self-conscious the manipulation of language.

The biggest difference between the two books lies in their approach to selfhood: Smart’s text is triumphantly ego-infused, a book in which the male love object seems to be central but is actually secondary to the protagonist’s true object of affection: art itself. Lemay’s book is not seductive in the same way, though there is an undeniable wooing at work in Hive.  Whereas Smart appropriates the Song of Solomon to seduce the art of love rather than the body of the lover, Lemay’s strategy is to hover over women’s history in order to claim the work of forgery as the most authentic of arts:

When alone I am more myself and yet the realization of being a fake otherwise is heightened. Writing about forgery, writing not forgery, writing forgery, sitting with the topic of forgery, rolling it around wet and secret in my mouth, has felt more real than any other creative endeavour. (321)

But “realness” is at issue here, and Lemay reminds us in Hive that women artists have hidden in plain sight throughout history. Hive’s central metaphor of the female art forger, the painter whose fakes are convincing enough to fool, suggests the great Catch-22 of art: if art is recognizable as art, then it cannot be art by definition. It is left to the artist to display her skill by disguising it and then by never speaking of it. Building ever-towering honeycombs of metaphors above this central tenet, Lemay makes Hive: A Forgery into a compulsively quirky read, and with good purpose. It is a book that is not completely severed from narrative, but that does not rely upon an urgency of plot; a lyric that reaches for historical framework; a rapture that does not rely upon deliverance; a text that is artful without the slyness that can accompany and bruise artfulness into artiness. That Lemay chose to self-publish this book makes a telling point about the material realities of the female artist. This text about reading authenticity as forgery is self-published; was it not thought to be legitimate enough – or representative enough – to be published by a publishing house? Without knowing the circumstances, I can only wonder how applicable Fred Wah’s aesthetic of “faking it” may apply to this text as a generative possibility. Wah notes the “duplicitous” nature of such conscious fakery, and one of the pleasures of Hive is the narrator’s refusal to situate herself in time or space outside the walls of her studio. Lemay’s fidelity is to a history of female artistry wrought through forgery rather than to any authentic self; the speaking subject in Hive is happiest when she is slipping between clues about selfhood left behind by other women artists, past and present. An investment in textual duplicity becomes a requisite for understanding who is speaking; that which is forged – i.e. that which is both shaped and faked – is that which is female.

The figure of the forger herself is a kind of ghost, a drifting outline that populates scenes that defy the starkness of reality, no matter how vibrant the colour or how physical the action, as in a sequence that has the forger figure skating and watching her would-be lover for clues about his intentions. This ghost is the liminal embodiment of centuries of female artists (Ann Jemima Provis, Artemesia Gentileschi, Leonora Carrington, Aganetha Dyck), and female writers and thinkers are quoted copiously throughout the text, including Simone Weil, Clarice Lispector, Hélène Cixous, Paula Modersohn-Becker, Virginia Woolf, Emily Dickinson, Susan Sontag, Nicole Brossard, Phyllis Webb, and Kristjana Gunnars among others. “Belief in the existence of other beings as such is love” notes Weil’s epigraph on Hive’s title page, and other quotations from Weil appear throughout the text. Often accused of fakery herself – a fake mystic, a fake catholic, an awkward though impassioned activist – Weil has shown an astonishing staying power in the public imagination, so much so that her very insubstantialities seem to sustain her appeal. Like the other women that Lemay invokes in Hive, Weil is a member of the artist’s hive, acting as her collective aesthetic, her words in the world, her feminine consciousness.

My initial temptation to read Hive as autobiographical waned as the book’s reflexivity questions the very terms it proposes:

What is the usual trajectory of the art forger narrative? How far must we carry things? themes? I suppose it begins: falling in love blind, with a piece a peace a work of art, falling in love in lovebelief with a series of brushstrokes, the white flick of a brush through red and pink. (220)

It may be true that Lemay falls in love with her own paradoxical conceit of the forger as creator and falsifier, but Hive’s portrait of the artist as a middle-aged woman forces the reader away from the desire to reduce this text to one person’s view. “Are all forgeries in the end, transparent?” the narrator asks, but in agreeing, she reveals the final illusion of the lost woman artist: “She has always been here. Let her at last appear”(237).

Tanis MacDonald is an Associate Professor in the Department of English and Film Studies at Wilfrid Laurier University in Waterloo. Her book, The Daughter’s Way: Canadian Women’s Paternal Elegies (WLU Press, 2012), was a finalist for the Gabrielle Roy Prize in Canadian criticism.  She is the author of three books of poetry, most recently Rue the Day (Turnstone Press, 2008), and the editor of Speaking of Power: The Poetry of Di Brandt (WLU Press, 2006).