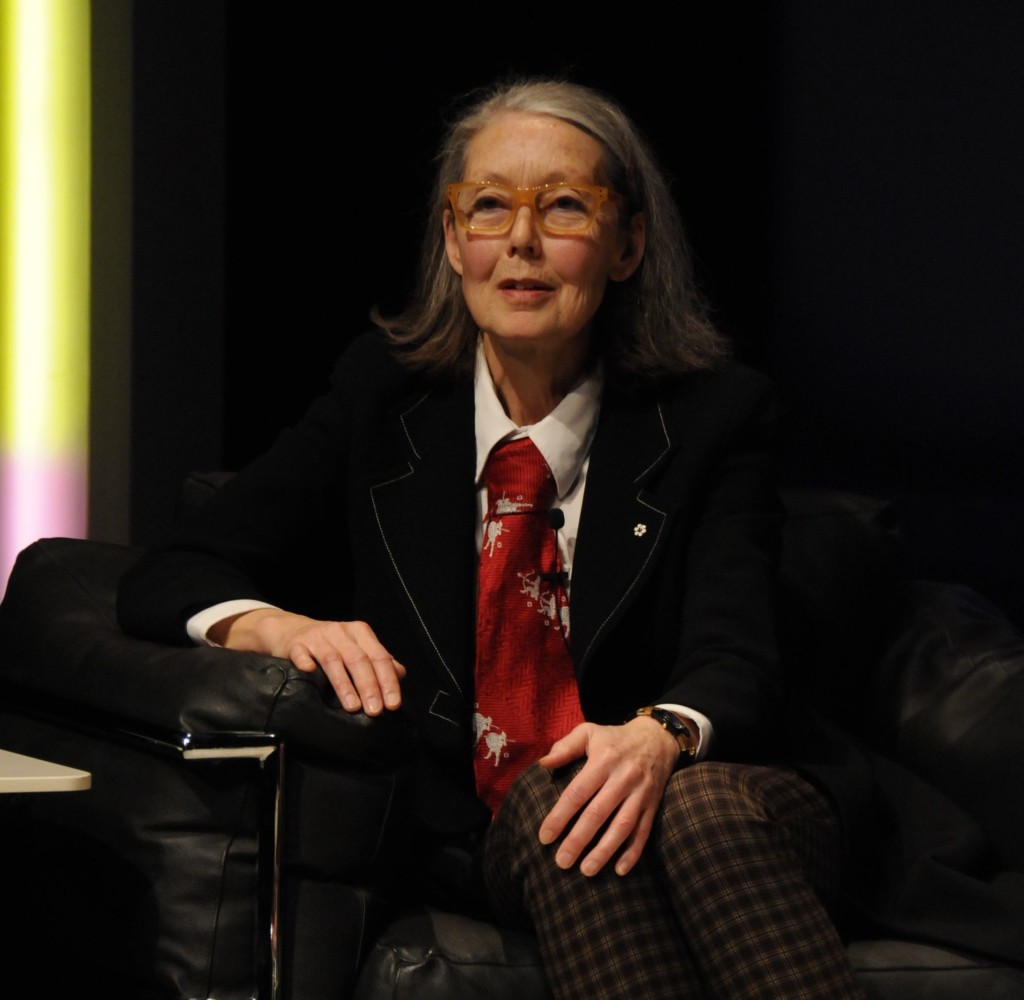 The line is so long and the lobby is so small and we’re all here to see a poet who is improbably famous but very deservedly beloved. As soon as I take my seat in the dark theatre, I notice a who’s who trickling in, authors and publishers and poets of all stripes have come out tonight to hear Anne Carson do her tricky thing with antiquity, with language.

Helen Guri begins the evening by stating that it is her “knee-shaking pleasure” to introduce Carson, who has been admired so frequently in the press, and who is known for her charisma. When Carson comes out, looking like quite an Annie in close-fitting slacks, a comically large tie, and a big long blazer, she deadpans that just this morning her brother informed her she has, in fact, no charisma at all.

It would seem that poets make excellent liars, and the truth of the fact is revealed as she enchants the big room for an entire hour. She begins with death, reading from an essay on reading Hegel at Christmastime because everyone she loved is gone. The sound of her voice filling the theatre is a contradiction—how can something that sounds so sweet be so crisp, so sharp?

While a few people laugh as Carson makes a wry quip or two, the general feeling in the room is that of occupying some sort of sacred space; even someone like me, who has admired a line or a phrase once or twice but never paid much sustained attention to Carson’s work, can feel how the room has turned from theatre to church.

“I’ve just finished writing a TV show,” Carson says. “It’s called Krapp Hour. None of the major networks have picked it up, but I have all hope.” We laugh gently through her explanation of the premise: it’s a talk show where Samuel Beckett’s character, Krapp, hosts guests and chats them up. “Here,” she says, “he’s interviewing Helen of Troy.”

The medium is shallow, late-night talk show, and Carson takes us deep enough into it that instead of scraping the bottom we come out the other side and into the past. She reads the names in the script, and instead of seeming like punctuation, the words “Krapp” and “Helen” take on the tenor of our collective hearts beating. While they chat about Troy and rivers and lies, we hang suspended between Krapp and Helen, waiting for the low beat of Carson reading their names, as if to reaffirm ourselves, yes, we are still alive.

Her pages rustle on stage, the mic picks up the papery sound, no one makes a move. There are no coughs or twitches. She reads a short bit from Autobiography of Red, setting us up for some selections from Red Doc>. When she gets into the new book, she tells us that “so much of human cruelty is simply incidental,” and we know it to be true.

There’s a strangeness in the way that Carson makes vowels sound—they filter in coldly, bundled up and tight, rather than generous and round. Her mouth hardly seems to move, though her eyes keep darting up and off the page. “Perfection sounds round,” she reads, but given the particularities of her own voice the opposite is true—perfection, unlike cruelty, is not incidental. And it’s not round the way a mound of snow is, the way a talk show set is a proscenium, the way a theatre curves around a stage. It’s sharp, pointed, the improbability of a vowel sounding hard as it spills out of a mouth.

A few questions come from the audience, though none have the sticking quality of sitting in the dark and feeling a force that can’t be seen, but that apparently can nonetheless be spoken aloud.

This piece is excerpted from Keeler’s ongoing IFOA Diary over at hazlitt, the excellent blog hosted by Random House. Emily M. Keeler is a writer and the editor of Little Brother Magazine.