Sharon get up
be cinema again
for long pearly stretches the sky isn’t anything
but stars
inside the theaters
projectors push light through emulsions
soon we’ll be peasants
films digitally perfect
sugars beat by threshers from the cane
with alarming new efficiency
mixed in low-calorie sodas
and presented to you at your table
as if it were 16, blond you
behind the stockyards
enduring the matinee of being Polish
eyes & a moon & silence
rivers outside the theaters
filling with evening’s cerise
there isn’t a syntax
to carry its light
light isn’t syntax
it just holds everything. 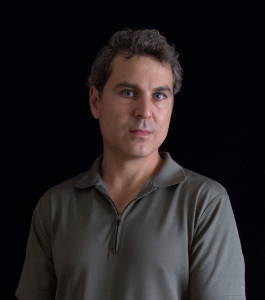 Rodney Koeneke is author of the poetry collections Etruria (Wave Books, 2014), Musee (BlazeVOX, 2006), and Rouge State (Pavement Saw, 2003), winner of the Transcontinental Poetry Award, along with several chapbooks. He’s also published a historical monograph, Empires of the Mind: I.A. Richards and Basic English in China, 1929-1979 (Stanford University Press, 2004). An early member of the Flarf Collective, he was involved with Poets Theater and Neo-Benshi events in the San Francisco Bay Area until 2006, when he moved to Portland, Oregon where he currently lives, writes, and teaches British and World History at Portland State University.