Each English version of Baudelaire’s Les Fleurs du Mal bears the mark of its translator; each one swings so wildly that sometimes a poem is barely recognizable from one version to the next.

“We yield, enthralled, to things repugnant, base”;

“In repugnant things we discover charms”;

Robert Lowell’s version of “To the Reader” takes mightier liberties than these. This line, about the value of repugnant things, the line by which I chose the translation I would purchase, appears not at all.

In Chris Tysh’s new translation of Jean Genet’s Our Lady of the Flowers, some of the base, too-human repugnancies also disappear, replaced by ones harder to eradicate. Our Lady of the Flowers, Echoic (Les Figues Press, 2013) is a translation not only from French to English, but from prose to poetry. Echoic (as I will refer to it throughout this review, to distinguish it from the original) is a compact work with profound deletions from and deliberate revisions to the language of the original text. Tysh acts not only as a translator but something of a reconceptualizer.

Echoic’s bones remain true to the original. Genet’s creations — the prostitute Divine, her lover and pimp Darling (recast here as “Mignon,” a meaning closer to “cute,” changing him from one who is adored to one who is adorable), Our Lady, and the band of fags[i] they consort with — remain true to their prosaic forbearers. It is Genet himself, so central to Our Lady, who is somewhat removed. Removing the name “Jean” gives Tysh more control[ii]  over the text. A nameless narrator remains, one who is no longer motivated by what Sartre, in his introduction, calls Genet’s necessary “state of excitement,” and the story is no longer a means to “provoke erection and orgasm” (Genet 5). The cold loneliness of the cell, however, which may as well be a coffin, pervades. The structure of the stanzas, two on each page with a good deal of white space above, replicates the constraints of a prison cell, emphasizing that the narrator “will remain between four white walls to the end of ends” (Genet 185).

Comparing the last paragraph of each work reveals this change in intent.  First, from Echoic:

I shall live perhaps …
And should I be condemned
To the stiffest sentence
I’ll invent new lives
For the enchantment of my cell
For Mignon, Divine, and Our Lady (134)

Now from Our Lady of the Flowers:

The dotted line that Darling refers to is the outline of his prick. I once saw a pimp who had a hard-on while writing to his girl place his heavy cock on the paper and trace its contours. I would like that line to portray Darling.  (Genet 307)

Stripped of the meandering and purposely, literally masturbatory prose, the syntax of death seems more perceptible in Tysh.  A partial list: The narrator or his imaginary paramour is “stretched/ Like a coffin at sea, pale and wintry” (7); the main character, Divine, lives in a garret overlooking a cemetery, the whole tale is “the ballad/ Of Montmartre above the dead” (41);  Mignon cuts through a line of queens[iii] mourning Divine like a “slaughterhouse knife” (13);  Divine has no shame in being for hire, but the most trifling of insults “slice her veins and let the words/Fly from their coffins” (56).

There is tremendous, involuntary movement in Echoic. In one sentence Divine is “pushing up from the earth” and simultaneously “falls hard” (52).  The characters drift on big, unpredictable waves; “At home, Mignon dives in D/ As into a mirror — a silent key opens/ The door and he becomes the sea” (26).  The oceanic metaphor ties into the actual moment of Divine’s death: “One could say she drowned” (131).

Tysh removes the descriptions of the seas of effluvia rushing from Divine as she passes. Echoic is a work more lonely than erotic, colder, and less visceral. Tysh has chosen to remove the debauchery and human processes that make up so much of the novel. Genet’s excess of self-pleasure is mostly absent, save one ambiguous mention: “I’m worn out and my wrist has a cramp” (19). Tysh has chosen to keep Darling/Mignon’s verbal eccentricities intact, but without the explanation. “I’ve dropped a pearl,” (21) he says but Genet explains: “he means that he has farted in a certain way, very softly, that the fart has flowed out very quietly… He also says, regarding a desire to shit: ‘I’ve got a cigar at the tip of my lips’” (Genet 80-81). Leaving out these “repugnant charms” keeps things to a certain degree of strictness. Tysh also refrains from most of the explicit descriptions of sex, having the narrator “skip this nightly mise-en-scène/ Of their bodies pressed tight” (89). In short, Genet’s plentiful mentions of all the things asses do are excised. Bodies are controlled in Echoic; it is those conceptual things — love, gender — that are allowed mutability.

The control that Tysh extends removes the feeling of community that Genet sets up.  In Our Lady, Divine, her new lover Seck Gorgui, and Our Lady stumble through the streets of Paris after an underground fancy dress ball. Genet says “The dawn was tight, a little tight, not very sure of itself, on the point of falling and vomiting. The dawn was nauseous…” (221). Anyone who’s seen the dawn because they’ve not got to sleep for reasons sweaty and euphoric would feel this scene profoundly. As the trio passes beneath the bedrooms of the sleeping denizens of Paris, Genet concludes that “such people never know what goes on beneath their windows, and that’s as it should be” (Genet 222). Earlier in Our Lady, Darling’s life is described as “an underground heaven thronged with barmen, pimps, queers, ladies of the night, and Queens of Spades, but his life is a Heaven. He is a voluptuary” (Genet 86). If my feelings about the project’s meaning to highlight loneliness rather than eroticism are correct, these deletions are required.  Though I cannot help but miss these passages.  For me, they are what makes the Queens special; I think their lives were meant to be beautiful. Certainly death is hanging around, and the cells of prison, like the strains of the closet, will come for these Queens. The life they’re about to lose is already deleted by the poet in the absence of those communal passages.

And so every queen in Echoic is to fend for herself, and this is established early on, through a clever little line-break: “There were others, of course, orphaned/ Fragments, I overhead prisoners sing” (5). Orphaned fragments, are these queens, forever apart from each other. Tysh’s breaks often create double meanings (like binary-slipping genders) and illuminate subtext. Another break elucidates the violence inherent in the lives of the Paris Queens.

But take just those last two lines and see the casual violence the queens inhabit in their relationships. Of safes opened with a crowbar it is said “I make ‘em cry every night” (81) and one can’t help but think of other bodies that have been compared to furniture, “ripped in half” by passion. Like “the body which resists at first / Opens up like a mirror armoire” (8). Mignon’s shirt, “Open at the neck” (24), alludes to Our Lady’s death at the guillotine. At church the priest will “Cram the host into their mouths” (25). The police proclaim that “There was no trace of forced entry” (112) to the apartment where Our Lady committed murder, but the double meaning here is that she was picked up by the old man she later killed.

If the goal was to take source material and imprint it, I believe Tysh was incredibly successful. Our Lady is surely changed, more jaded perhaps, but no less beautiful than it’s ever been. Our Lady of Flowers, Echoic is a profane, non-sensual translation of a deeply sacrilegious and corporeal work.  The flagrant language of Genet — “If I continue, he will rise up, become erect, and penetrate me so deeply that I shall be marked with stigmata” ( 77) — is replaced by a steely humanity.  Echoic lies in a place of isolation, as cold and unpredictable as the sea, yet confined as a coffin. Genet wrote to escape the cell, and Tysh replies by forcing everyone inside it with him.

[i] The use of “fag” and “Queen” throughout the essay is a conscious use of – and respect for – the language of Genet (or perhaps more properly the translator of Our Lady of the Flowers).  I also use the pronouns Genet (and later Tysh) used, though all these characters are male-bodied.

[ii] Tysh shows tight control over Echoic by throwing in a couple anachronisms, references that not only didn’t exist during the setting of the piece, but didn’t exist when Genet wrote Our Lady of the Flowers.  In this way, she takes direct ownership of the poem.

[iii] Genet capitalises “Queen” and Tysh does not.  This discrepancy was revealed in the copy editing process, and otherwise I might not have noticed.  My instinct is that Genet empowers them, because he is of them, while Tysh, as an outsider, uses “queen” in taxonomy. 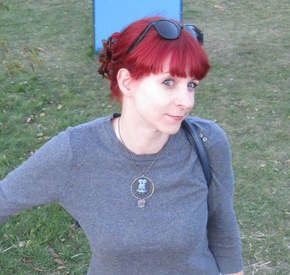 Heather Cromarty received her B.A. in English from the University of Calgary and promptly moved to Toronto, where she’s lived for over a decade.  She is a reviewer and critic for Lemon Hound, Quill and Quire, and The Globe and Mail, among others.