The shark-face is screaming in the doorway
opening its fangs. SCREAMING thathat it cannot die,
that it has come back, this time
on wings, and will spare no earthly thing.
It is moving above me, it is burning my heart out.
The ancient owls’ nest must have burned.
A red fox stain covers blue hill. Suddenly all is
loathing. Earth is eating trees, fence posts,
gutted cars, earth is calling in her little ones.
They will be kept beautiful though all trees
and lawns will be plastic. Those who wish to die
will drift through the almost empty streets.
The deer in that beautiful place lay down their bones.
You couldn’t tell what they were anymore.

This is the worst thing I’ve ever witnessed.
The churches, houses, and all on fire
and flaming at once; and a horrid noise
the flames made, and the cracking
of houses at their ruins. Hundreds
of civilians were killed instantly
by the impact. Hundreds more remained
alive but trapped. Only the fires,
which are still raging in some places
at a distance, give out a little light.
Four of us entered a room called level 27,
choking, and rubbing painfully stinging eyes.
Ash was falling onto the ships now,
darker and denser the closer they went.

Suffer the first vision that set fire to the stars.
It might be the birth of a new Venus
among us, spoiling the colors of the whole world,
the desolation of extinguished suns, simple
as false dawn. And there they dig into the sky,
beside the ruined tower. The time will come
when not a thing is done, for every hand
is lunatic like limbs knife-skewed, like
the wind-torn work of a spider, swastikaed
synagogues listening to the prisoned cricket shake
its terrible dissembling music in the granite hill.
The starred eternal worm sweats nervously
through wire and fog and dog-bark until suddenly
all the toys of the world would break.

-Paul Vermeersch, from Don’t Let It End Like This Tell Them I Said Something (ECW, 2014) 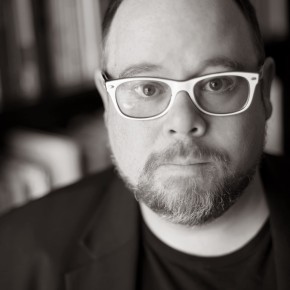 Paul Vermeersch is the author of several poetry collections, including the Trillium–award nominated The Reinvention of the Human Hand (M&S, 2010) and Don’t Let It End Like This Tell Them I Said Something (ECW, 2014). Vermeersch holds an MFA in creative writing from the University of Guelph for which he received the Governor General’s Gold Medal. His poems have been translated into Polish, German and French and have appeared in international anthologies. He has taught creative writing at the University of Guelph and Sheridan College, and currently teaches creative writing at the University of Toronto’s School of Continuing Studies. He was, from 2001 to 2012, the Poetry Editor for Insomniac Press, and he is now Senior Editor for Wolsak & Wynn Publishers Ltd. He lives in Toronto. You can follow Paul on Twitter.