Reading Theory, A Sunday, the recently released Belladonna English edition, of that 1988 Quebecoise feminist classic, La Theorie, un dimanche, was for me a curiously double experience.  Energizing, heartening, both pertinent and at the same time nostalgia-inducing for what seems a simpler time, now that we teeter on the brink of looming global climate crisis in the midst of corporate imperialism run rampant.

More than ever we are aware of how much physical and psychological suffering women experience under the brutalities of patriarchy, so up close these days in news reports, in emergency online petitions, in fiction and non-fiction that delineate women’s lives in India, Iran and countless other places, including here at home. Still, in Canada, every month aboriginal women go missing only to be found (or not found) murdered, a national shame.  And still brutal domestic violence continues in every province.

On the affirmative side, however, more young women are pursuing dynamic careers, relieved from exclusive responsibility for keeping up home and family now that their male partners share in the domestic sphere.  I’m glad to see young men embracing fatherhood, taking an active role in both the humdrum and playful aspects of dual parenting.

Yet still, while reading, I kept saying “yes,” as in “we still need this.” For women, consumerist advertising and celebrity culture are powerful antagonists against developing a holistic view of our capabilities and our selves. Theory, A Sunday offers in-depth analysis of how we experience erasure as subjects of our own experience, an erasure that for women writers is doubly difficult to write past. To give oneself the author-ity (signed f.) to speak what one sees, feels, imagines, thinks in the face of what can often feel like massive cultural denial is a feat.  It is a rite of passage that every young woman writer, aware of her situation in the culture at large, must undergo.  This book functions as an invaluable guide for that passage.

I’m also moved by the courage and honesty of much of the writing, the digging deep into painful ambiguities of individual experience that Gail Scott, France Théoret, and Louise Cotnoir do.  I find still very relevant the clarity of Nicole Brossard’s steps for “inscrib[ing] our convictions and perspectives” so as to rewrite reality from “a feminist locus” (Brossard/Weitzman).  Louky Bersianik’s sarcastic and linguistically playful take-down of the dismissive remarks made in male criticism of her own and other women’s writing underscores the recent debate on criticism between Jan Zwicky and several macho male critics – in other words, this is still relevant a quarter of a century later (sigh).  Similarly relevant is Louise Dupré’s investigation of the question, “Isn’t this triumphant return of the sex symbol a symptom of the difficulty of creating a collective consciousness among women that is able to bridge the generations?” (Dupré/Weitzman).

Louky reminds us of what is perhaps the integral contribution of this collection: feminism as signifying practice rather than ideology.  The personal element in this collection, whether in essay form or transposed into fiction or prose poetry, works against the notion of enforced ideology that so many critics have used to attack what has been less a unified front than a movement with a moving centre, even multiple centres, a spirale with its “e muet” no longer silenced.  Or as Louise Dupré puts it: “a territory in motion, open, polymorphous.”

To translate writing that interrogates language, writing that initiates “a mode of thinking that would take us away from the binary and linear modes of masculine logic” (Brossard/ Weitzman), offers a challenge that it is creatively taken up by all four translators.  Gail, fluently bilingual, translates her own work with narrative immediacy.

A final thought from “now”: there is unsounded turf that has no voice other than what we might give to it through our attention.  I can’t help pointing to a further dimension for analysis, the perspective that the American feminist Susan Griffin, among others, voiced decades ago – a kinship we share with this earth and with so many other species constantly exploited and defaced for the sake of “the economy.”  Now we see with greater immediacy how earth’s signature is our dependence on it for life itself. Lisa Robertson’s very pertinent introduction speaks of this when she writes of the political aspect of theory: “It’s not different or separate than the ongoing questions about how living together happens and what living together means.”  Yes, I take this “living together” to mean not only people in humanly constructed habitations (“Theory is our city,” she writes) but this AND the complex interdependency we share with other species in our-and-their habitation anywhere.

Nicole concludes her text with the following observation:  “…as soon as it breaks the sound barrier of patriarchy, feminist consciousness finds itself relentlessly on the side of creation.”  From the West Coast I’d like to add: when we break through the sound barrier of patriarchy’s relentless commodification of living bodies everywhere, we find ourselves speaking on the side of all our relations, as the First Nations say. 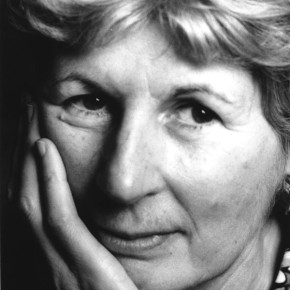 Daphne Marlatt’s poetry titles include Steveston, This Tremor Love Is, and, in 2013, Liquidities: Vancouver Poems Then and Now. Her novelistic long poem The Given received the 2009 Dorothy Livesay Award. Last year Anansi published a new edition of her acclaimed novel Ana Historic, with foreword by Lynn Crosbie.  In 2012 she received the George Woodcock Lifetime Achievement Award.  This spring Wilfred Laurier University Press released a selection from 40 years of her work, Rivering: The Poetry of Daphne Marlatt, edited by Susan Knutson.