she continued, anxiously stepping in front of him to detain his going

Spence said, a kind of cold expressionless tone in his voice

she repeated, almost without emotion

she returned to the only subject which interested her

Spence said, the irritation growing in his manner

she said vaguely, as though it was Spence who himself had mentioned him and thus brought him to mind

he paused on the word

he said and he put on his hat now, which she looked at, he thought, rather critically and also with a certain envy

she forced herself to say at last

he said, and then winced at his own words

he hurried on with another speech

Merta said, pretending to find humour in his words

Gibbs said, putting down some books

Merta said, trying hard to keep the disapproval out of her voice

Gibbs said, sitting down at the far end of the room and taking our his harmonica.

she smiled, closing her eyes.

Gibbs said, and while she was saying Tommyrot! Gibbs went on

he said with sudden fire

she began, white, and her mouth gaping a little, but Gibbs started to play on the harmonica again, cutting her off

Merta said above the sound of harmonica playing

she repeated, a little embarrassment now in her voice

he asked, putting down the harmonica with impatience

she said, a touch of sophistication in her voice, as if the coffee here were unusual and exotic also

she said, her bitterness returning now against her will as she stood in the kitchen

she cried. Then, catching herself, she said

he suddenly turned on her, and taking the dish of jello from her hand he put it down with a bang on the oilcloth covering the tiny kitchen table

he said in his stentorian voice

Gibbs snapped at her

she wondered taking her spoon out of her mouth

he said, a bit weakly, and he took out the harmonica from his pocket, looked at it, and put it down noiselessly on the oilcloth

she told him suddenly again with passion, forgetting everything but her one feeling now, and she put out her hand to him

she said, and she brought out her handkerchief and wiped her eyes, making them, he saw, even older and more worn with the rubbing

he said, picking up the harmonica again

she said laughing a little. Then understanding his remark more clearly as her weeping calmed herself, she said, commanding again

she said, suddenly very white and facing him

she hurried on as if testifying before a deaf judge

she said now as though powerless to stop, words coming out of her mouth that she usually kept and nursed for her long nights of sleeplessness and hate

she told him, quieting herself with a last supreme effort

she said suddenly wiping away the tears, and tensing her breast to keep more of the torrent from gathering inside herself

he said, and he got up and as he did so the harmonica fell to the linoleum floor

she said tightening her mouth

she said, struggling to keep the storm within her quiet, the storm that now if it broke might sweep everything within her away, might rage and rage until only dying itself could stop it

she commanded
Author’s note:
Recently, while on a wine tour of the Okanagan, I found myself passing a wet afternoon in my motel room waiting for the skies to clear. In the lobby of the motel, a 1967 anthology of contemporary American short stories. “Updike, Roth, Cheever, McCarthy, Baldwin, Batheleme, and others.”

I had read most of the stories at university. But rather than feel too old or too wise I re-read James Purdy’s “Encore” and decided to make from it a poem based not on what was said, or what was said of where it was said, but most everything else. 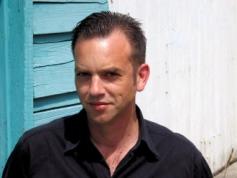 Michael Turner is a Vancouver-based writer of fiction, criticism and song. He blogs at this address: http://mtwebsit.blogspot.ca