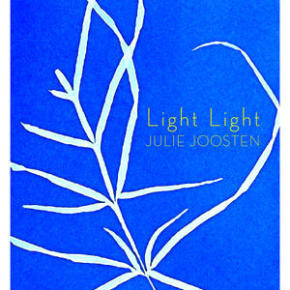 Stillness is the new fantasy – a rest in the garden after work or an upcoming vacation – promising an answer to the madness of our schedules with a restoring sense of balance. Nowadays, every time we try to meditate or unplug from our devices, there’s this lack. An absence, resonating with panic – have you felt it? The millions of people who follow secular spiritual teachers like Deepak Chopra and Eckhart Tolle certainly have.

As wrapped up as we are in constant doing and thinking, we experience calm in moments that seem to descend from out of nowhere. Timelines, worries and social-media feeds take a mental backseat to clouds, leaves, snow. Or maybe just light: gleaming surfaces, oscillating in the downtown exhaust. In those instances we experience perception plainly and wholly; the lens through which we separate ourselves from the world has, for a moment, clicked off. If these notions feel overly bucolic to you, be warned: they form the philosophical groundwork of Julie Joosten’s debut collection of poetry, seeking out “a landscape as it is when no one is there”. And by “no one”, she includes her own gaze. Light Light studies the coexistence between life forms and Earth as a way of blurring the duality that separates us from the outer world.

In the preface of his mega-selling book, A New Earth, Tolle asserts that his teachings “can only awaken those who are ready”. It’s a telling disclaimer, addressing the breadth of his audience more so than his message, but I extend it here because Light Light achieves the zen-like oneness it promises. The close of Joosten’s first entry, “Wind”, invites a palpable sense of calm. Her single lines and couplets advance with the easy volition found in observation:

Proof anticipates direction. It is noon repeatedly, sky repeatedly. It is
wind repeatedly, the moon rising or setting in declensions of light.

To infer an existence.

Thinking, by analogy, of fossilized plants, of how little of life is alive
in the world.

How in a little hole a tendril may keep its point for twenty hours
perhaps, or thirty-six, then withdraw.

We extend to accompany the plant.

We sway in the hatchery, learn synchrony from the silkworm.

From the beginning, these intricate rendezvous of natural instincts are motivated by something unseen, yet documented in weather changes: ruffled surfaces, cooling hues. Indeed, wind and light command a sly, supernatural element in Joosten’s world while remaining ultimately more tangible than time. “Wind” introduces the author’s elemental reverence while also prefacing a look back at scholars who first sought to orient our gaze to nature’s mystical and scientific significances. These sporadic ‘Wind Scenes’ cup ancient light in the palm and, from one enlightened mind (poet John Keats, minimalist painter Agnes Martin) to the next (philosophers Zhangzi, Simone Weil), intimate how morning can distil perspective.

The beauty of the morning, its transparency, becomes thought.

Dissolves identity in reception, in feeling an idea of the Morning. (71)

The capitalization of “Morning” was originally Keats’ doing – in a letter to a friend, giving thanks to daybreak for cleaning his state of mind – but Joosten communalizes that show of respect, insisting that, like thought, nature is beyond personification. In another “Wind Scene” that recalls Zhangzi’s tale of an old woman with skin “as bright as snow”, Joosten sees detachment as a sensory gateway:

Breath by breath, thought by thought, an incremental withdrawal
leaves not nothing but an openness that assumes the gradualness of
dimension.

So begins a dismantling process: within the breeze that carries Keats’ deference and Zhangzi’s discipline of non-attachment, is a rediscovery of nature that ceases to objectify what surrounds and includes us.

Joosten’s revelatory glimpses reveal deeper concerns as they play hopscotch over the evolving environmental sciences. Darwin’s The Power of Movement in Plants gets compulsory attention in Light Light’s final third, with “Touch / The radicle thus endowed” mediating old breakthroughs for new awareness. Adapting the practice of arming plant tendrils with instruments and recording their movements, Joosten stretches Darwin’s method to entwine the intelligence of plant-life and humankind.

Tenderness is a kind
of touch. When you touch me
and I’m looking at the orchid
tenderness moves between us

as an electrical current. (84)

Repeatedly explored here as a study of being and stillness, botany also serves as a cautionary tale for those trying to subvert that intelligence. Noting the arrival of the cyanotype, an early photographic tool used by Anna Atkins to catalogue algae, Joosten’s stanzas tighten in response to an encroaching dilemma: life being reduced to an image.

Even though Joosten’s historical accounts are scattered non-chronologically, the beginnings of a slippery slope compile without commentary. After all, Light Light‘s intrinsic awe toward nature is openly indebted to the science that enlightens it. (For evidence of that, look no further than the cyanotype images that adorn its cover.) In keeping with her desire to remain one with the environment, Joosten’s curiosity resists politicizing or concealing ecological issues. “Ghost Species” enlists Henry David Thoreau, whose recorded timelines of when flowers bloomed in the 1850s contrast the accelerated seasons of modern-day global warming.

place-faithful, they persist after the ending of their environments.

Exiled in stillness, then in a moment, slipping out of life. (17)

With several plant species becoming scarce, Joosten hints at a wasteland in the making. A similar use of clean line breaks and near-prose appears in “If light stabilizing / If to receive a bee” to examine the work of naturalist Maria Sibylla Merian but soon splinters in agitated paths as new casualties of coexistence accrue. In searching to clarify why flowers disguise themselves as bees only to become violated, the poem relates the hardships of slaves who were recruited to ease Merian’s travels and, by ingesting peacock flower seeds, willingly aborted their own babies to prevent future slaves. Although the latter account begs a moral verdict, Joosten eyes each violation from an impartial angle, averse to letting her emotions fragment the whole of the landscape. Still, the odd tongue-in-cheek stanza offsets her harmonious tone:

(Agnotology: the study of culturally produced ignorances.
Agnotology extends the questions ‘what and how we know’ to
include ‘what we do not know,’ and ‘how we do not know it.’)

I don’t know
the Arawak
or the Carib
name for
peacock flower.

Light Light’s redundant title parses degrees of knowledge – what you can prove and what you can sense – turning the curriculum of the empiricist into fodder for the spiritualist: the long poem “Once Sun” sees a valley in its natural element, then the texture of each element, then the blurring of the texture due to the limitations of the eye, and finally the universe felt beyond the eye. It begins in the pastoral mode, addressing facets of light that mark a valley on the edge of daybreak, but soon becomes overwhelmed, verses stumbling through the sensory overload of Morning, her elegant streams of words evaporating into puddle phrases and stuttered tangents.

if drowning     cliff and valley-foundering

On one page alone, the word “light” is employed twenty-three times – repeated like a mantra. When “Once Sun” regains composure, its couplets recognize a loss of consciousness and are reawakened. Moreover, its eighteen pages condense the ethos running through Light Light: that when we forget ourselves, we experience stillness. In the absence of a subject, nature ceases to be objectified. Light, then, becomes an inner quality, an awareness.

I didn’t know who I was or where I was. The wonderful calm of
forgetfulness. Each time I recall it there is nothing to compare it to.
Remembering forgetting as an incomparable delight and calm. (58)

But where does awareness lead? “Everything begins in mysticism and ends in politics,” wrote poet and essayist Charles Peguy, whose weary pessimism fits snugly into our over-stimulated and divisive modern climate. Make no mistake. Exploring stillness is so simple it’s tricky. And in the throes of daily life, with its constant, material trespasses, Light Light could easily be discarded as new-age-y, Zen-lite fluff. (Now’s a good time to exercise our knowledge of what “Agnotology” means.) Given that her interpretation of light refracts in a prism, simultaneously questioning the nature of life, perception, reality and emotion, Joosten’s collection softens skepticism on an incremental scale. In other words, those readers hoping to extract the essence of Joosten’s insights within a few pages are setting themselves up for a tongue-tied misadventure.

Prayer not
as petition
but as attention,
an unexpected
grace:

to attend to the existence
of caterpillars
of orchids. (33)

Accepting the torch from her list of naturalist luminaries, Joosten’s solo research forms the pervasive, spiritual dimension of this debut. Embracing knowledge – the agency of plants and animals, the miracles of dawn and dusk – as a channel to better supplement our senses, Joosten’s faith is ultimately the screw by which these poems hinge. Maintaining a focus that’s intangible yet relentless, these poems will best connect with readers of a generous metaphysical threshold. To circle back and borrow a stanza from the first poem “Wind”, Joosten traverses coexistence “to give attention to what does not exist”. Stillness? In spite of all of our findings, we’re still looking to free ourselves from that busied abstraction life has become. And while we may be kidding ourselves when we vow to unplug this weekend, Light Light offers a small oasis. Whether it’s approached as persuasive mysticism or wonderful poetry is up to you. 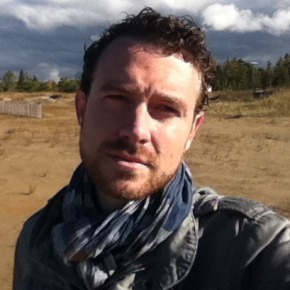 Ryan Pratt writes from Hamilton, Canada. His work has appeared or is forthcoming in CV2, The Puritan, Quiddity and In/Words Magazine, among others.