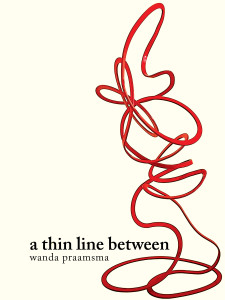 EXCERPTS FROM A THIN LINE BETWEEN

on a hill in a suburb in serbia
jon went back
julie followed
there were two weddings
one in serbia one in canada
two services two families two dresses
two kids
baby-girl baby-boy
they are already more advantaged than most serbian kids, says julie
they speak english and are half-canadian
and she is happy they are growing up here: the serbs cherish children
the schools are good
so much emphasis on art and culture and languages
this is europe after all
but I don’t want my kids to go to university here, says she
I want them to go in canada
where there is more

the ripe red of an apple

chilies firing green spice from pile on a market floor

and between all the here-ing and there-ing
you often have to ask
are you ever here-here?

nights on the news desk
when a soldier dies and I don’t care anymore
I just want to go home it’s one in the morning
you’ve lost your soul, wanda
I lost it back in santiago when I wanted to take out rebecca’s ellipsis
a drip of soul slithering away with every erasure
deleting words
revision
rewriting

still I think that everything is editing
or I did for a while when my head felt nothing else
people editing their lives
those snowplows edit the street, scraping it clean
the gardener edits the ground, please no green disturbances on this path
dank u wel

you shouldn’t bring your work home with you, says michiel
right true but all of us do
especially the artists, those prickly characters who go around with their heads
knotted tightly around their left knees
tap them on the shoulder and they jump because you’ve disturbed
their quiet churning
internal

the grooves in space

until touch softens the grip

in air instead of water

craig says       you’re looking through me, like you don’t even see me

Wanda Praamsma grew up in the Ottawa valley in Clayton, Ontario. Her poetry has appeared in Ottawater, 17 seconds, and Feathertale, and several literary non-fiction pieces have appeared in the Toronto Star, where she worked for several years as an editor. She has worked, studied, and lived at various points in Salamanca, Spain, Santiago, Chile, and Amsterdam, The Netherlands, and has travelled to many places in between and beyond, including Cuba, India, and the Balkans. Praamsma currently lives in Kingston, Ontario. a thin line between is her first book of poetry.