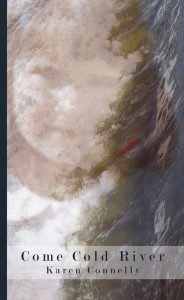 aaaaaaNot a door or a window left of that time

aaaaaaWhat is the use of a people’s history? (101)

These lines appear in the second to last poem of Karen Connelly’s Come Cold River, “Shelter on the Banks of the Bow,” and pose a question that is central to the collection: what is the use of a history that denies the truth by neglecting and forgetting silenced individuals? Come Cold River is a politically charged yet poetically delicate book of poetry that simultaneously takes the reader across Canada—from forests, rivers, reserves to the heart of Calgary, Toronto, Vancouver—and into her family, while she questions the truth of a nation or a family as home.

These poems consider Canada as a home, a landscape, and a fraught political entity, within which Connelly’s correspondingly conflicted family is rooted. Throughout the book, Connelly plays with lineation on the page to map difficult personal and national histories through the form of each poem. The collection depicts traumatic physical and sexual violence through sparse description and coding language, paralleling the speaker’s struggle with the violent histories and present moment of a nation and a family. These poems, even those most closely focused on individual and personal experiences, show an intense awareness of geographic location, landscape, time of day, season, and the spatial relation to a troubled sense of home.

The book is divided into three sections, “Home for Good,” “Awake,” and “The Last Shelter,” each borrowing the words of its title from a poem it contains and each reflecting a distinct poetic focus. The first section, “Home for Good,” is prefaced by a prosaic mediation on the origins of “Canada.” Connelly writes, “The name of my country is the name of an ancient (and living) nation. Or it is nothing” (11). She establishes her intention to play with the etymology and language, and her concern for the political history of a nation in relation to the present moment and the individual. The poem from which this section borrows its name returns to these ideas, as Connelly questions the notion of nationalism by manipulating the national anthem:

Acá nada. Kanata.
Oh Canada, what do you really mean?
How can I sing you
without lying? (17)

Connelly questions the national anthem throughout the collection, as she interrogates national identity and history through language. Her poems on the identity of Canada explicitly declare their political intentions in this way, and her poems on family are likewise politicized by their relation to themes of nationhood.

In “My sister used to hitchhike all the time,” the speaker relates family trauma—the sister who is “still missing” (90) in “Group Portrait by Skylight”—to the universal uncertain safety of “the woman” (25). The poem begins, “She was the women/ walking on the edge/ of the highway” (25), and establishes the sister’s absence through her use of the past tense. In the second stanza, the speaker “was that woman, too, the one/ who walks into the roar of the wind” (25), and reminds the reader that all women, like her, are this universal figure, whose sense of unsafety could be justified at any moment. This threat posed by the outside world relates back to the speaker’s sense of a lost home:

The home that the speaker, the sister, and “the woman” (25) look for is a sense of safety that has long since been disrupted by the violence of “the father/ beating the life out of her [the sister]” in “The War” (24). The speaker expresses a sense of vulnerability for all women without a certain home to which they can return. The end of the poem reflects this uncertain—yet implicitly traumatized—feeling:

He pushes open the door.

A later poem, “Enough,” struck me as the centerpiece of the collection. Its place at the midpoint of the book and its unusual length juxtaposes the relative shortness of the poems preceding it. The poem commemorates missing and murdered women who were never given justice by the Canadian government. The poem employs what appears on the page as a two-column structure that positions a list of the sixty-eight names of these women to the right of the poem. She writes,

The poem ends “Wish me through/ Jane Doe” (58), which demonstrates the poet’s sensitivity and intention to politicize. However, the employment of this perspective of missing and murdered women also appears somewhat problematic. While the poet’s tone expresses an investment in the lives of these women, the poem’s form proves ineffective in the poet’s effort to honour these women. The list of their names seems detached from the verse. Perhaps this formal choice would prove more effective if Connelly read the poem aloud. In such a politically charged volume of poetry, I couldn’t help but feel inclined to question the nature of these politics and the effect of the poet expressing them in this way—and provoking this question doesn’t seem to be the poet’s intention.

While the other poems here manage to express family and national politics in a sincere and effective manner by relating the political to the personal, “Enough” positions the first person speaker as an outsider. She says, “Each morning I read/ the newspaper,/ watch the CBC” (49); the speaker is detached from the experience of trauma, thus raising the question of her right to speak for these women.

In the second section, “Awake,” the poem “The Children” offers a striking encounter with the speaker’s unborn children, reflecting her acute awareness of the dangers of the world around her in her expressed reluctance to allow these children, despite their insistence, to enter the world. This poem heightens the notion of childhood naivety by depicting unborn children as eager and fearless, drawing attention to the inadequacy or inaccuracy of conventional representations of children as innocent; in this collection, the dangers of the world are faced immediately at birth.

The final section, “The Last Shelter,” presents long form and serial poems that are reminiscent of elegies and reflections on location and relationships. In “Group Portrait By Starlight,” the poet takes the reader to “the cold starlit body/ of the river” (94), the river that has streamed through the poems in this volume. “Shelter on the Banks of the Bow,” the poem whose lines began this review, returns to the question of the truth of a home and where a woman can feel safe when exiled from home.

The final poem, “No Hunter in the Field,” offers a sense of the inevitable as closure, questioning what “forgiveness is” (102) as the speaker pursues forgiveness of her father in the face of his nearing death. The reader too is asked to consider if they can forgive the father or the nation after the lives and histories these poems have travelled through. However, the final lines offer a sense of the speaker’s own vitality through the awesome sublimity of the landscape: “yes! come/ cold river/ rush in” (105). The book concludes with a final snapshot of the river in which the speaker has seemingly drowned through the preceding poems, but subverts the representation of the river into a source of vitality.

In Come Cold River, Karen Connelly spreads across the page newspaper clippings, a storm-struck family tree, and an elegant juxtaposition of memories and the present moment. Insistently political and delicately crafted, these poems demand not only your intention but your engagement with daring choices of form and content. She takes the reader through harsh familial and national climates set against stunning portraits of Canadian landscapes. She invites you into her troubled sense of home, shows you violence, love, and grief, and then lets the “cold river/ rush in” (105) over you. 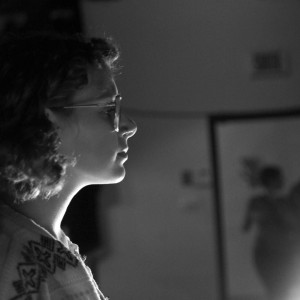 Kailey Havelock lives in Montreal and studies at Concordia. This spring, her poetry and academic work will appear in Subversions: A Journal of Feminist Queries, The F Word, Integrated Journal, and Concordia’s Journal of Interdisciplinary Studies in Sexuality. She is the incoming Editor-in-Chief at Soliloquies Anthology.