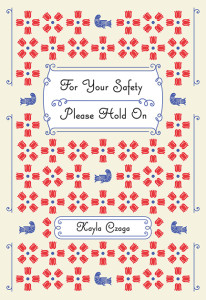 For Your Safety Please Hold On, Kayla Czaga. Nightwood Editions (2014).

Kayla Czaga’s debut collection of poetry, For Your Safety Please Hold On, manages a balance in voice and tone that is likeable, playful, domestic—but also unpredictable, full of precipices and turns. Poems such as “Gertrude Stein Loves a Girl,” “Some Girls” and “For Play” question the relation between femaleness and language, the different modes of being that girls must negotiate as they grow up. The world of these poems is feminine and full of edges while also being delightful and relished because readers live in recognizable versions of it.

Czaga makes the multiplicities of girlhood available in a way that lays out intimate but somehow archetypal progressions, from learning individuality to navigating slippery female friendships and fraught interactions with men. “A two / of girls is as cruel as exclusive” (43), we are told, “A girl turns another girl womanish to stay small and wanted and win” (44). The neighbourhood universe of this girlhood, of front lawns and hopscotch games, cannot become tiring in hands that turn it over and over, allowing things to fall in and fall out.

This collection is anything but static. It houses certain preoccupations with rituals and objects of childhood: the mad multiplication minute, the nostalgia for the VHS tape, the scabs, Barbies, and birds murdered in the hands of boys, the scrawled “fuck” on an Etch-A-Sketch. These investigate a space where collective memories overlap and feed each other.

Many of the poems profile individual family members or familial entities, and here Czaga speaks with an honesty that is almost jarring at times. These poems simultaneously seem to be a compilation of things never told to certain family members and things everyone knows. They are facts, skillfully curated and particular to the moment. The decorative aunt’s face “looks like a military cot you could bounce a quarter off” (36), the not-grandfathers are “old orphans dangling outside / of the family on every greeting card / occasion, not sure / whether or not to touch you” (33). This honesty is one few people use, feeling loyalty and maybe a protective pity towards the intimacy of family. It makes the collection extremely interesting for me to not know exactly where that honesty comes from. There is a feeling that it exceeds the borders that ask female speakers to remain respectably within the voice of a girl-child even long after they have grown up.

The poems rarely self-center by drawing attention to their own metaphors, instead revealing the ones that exist in Czaga’s world. “My father is more like a poem than most poems are” (20). As good figurative language does, they gesture outwards rather than inwards. They are constantly framing and reframing their subjects, looking newly at different sides. There is a lovely tendency to braid characteristics in with their objects, creating a weave specific to one person: “Her basic cable-knit is full of reruns— / Wheel of Fortune loops over and over / holes in the program” (37). In tracing the webs that people create while intersecting each other’s lives, either deliberately or to get to a different destination entirely, Czaga is subtle and powerful all at once. The collection traces a coming-of-age arc with expertise especially because the voice is able to move unattached through all of its phases.

That time from the provincial park I stole
wild lilac with my mother and gardened it
into the backyard. Those times into her arms
made of fabric softener I ran, my skirt
flapping in the breeze. The time we drove
for sandwiches together to the next town
over with the radio and windows open.
The time she bought me a fairy journal
in Great Falls, Montana. The private time
we fled to the movies to escape family
reunion time. All that time before the time
she started dying, how there was less
of it and somehow more than enough.
Now there’s not enough and too much
sitting in doctors’ offices with expired
magazines. How hard it is to move through.
How over it my mother is crumbling.
Time’s a drag and with it drags the light,
the lilac blossoms into lilac dust. But how
lovely the lilac vanishing in the low dusk,
the petals deadlining all over the lawn. 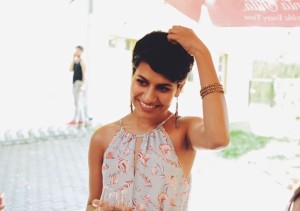 Rudrapriya Rathore was born in New Delhi and grew up in Kolkata and Toronto. During her undergrad, she served as an editor for Soliloquies Anthology and Yiara Magazine. She is the recipient of the 2014 Irving Layton Award for Fiction.