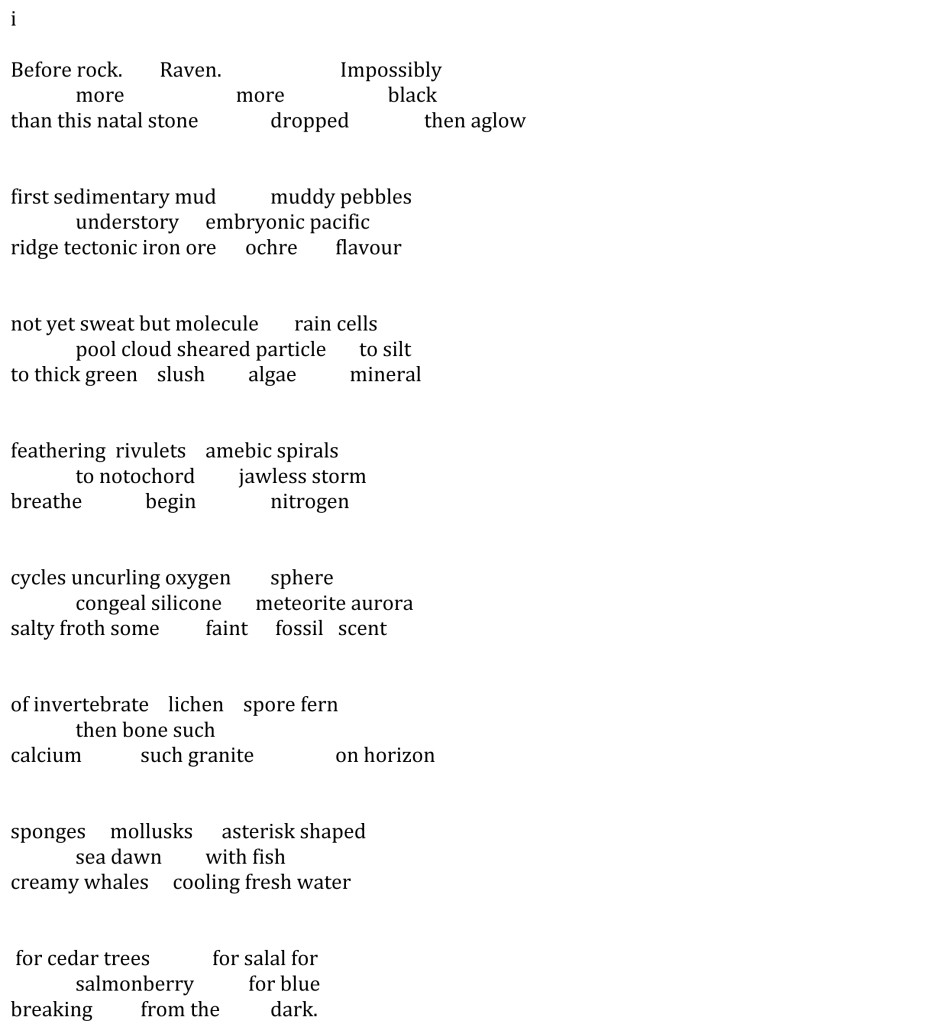 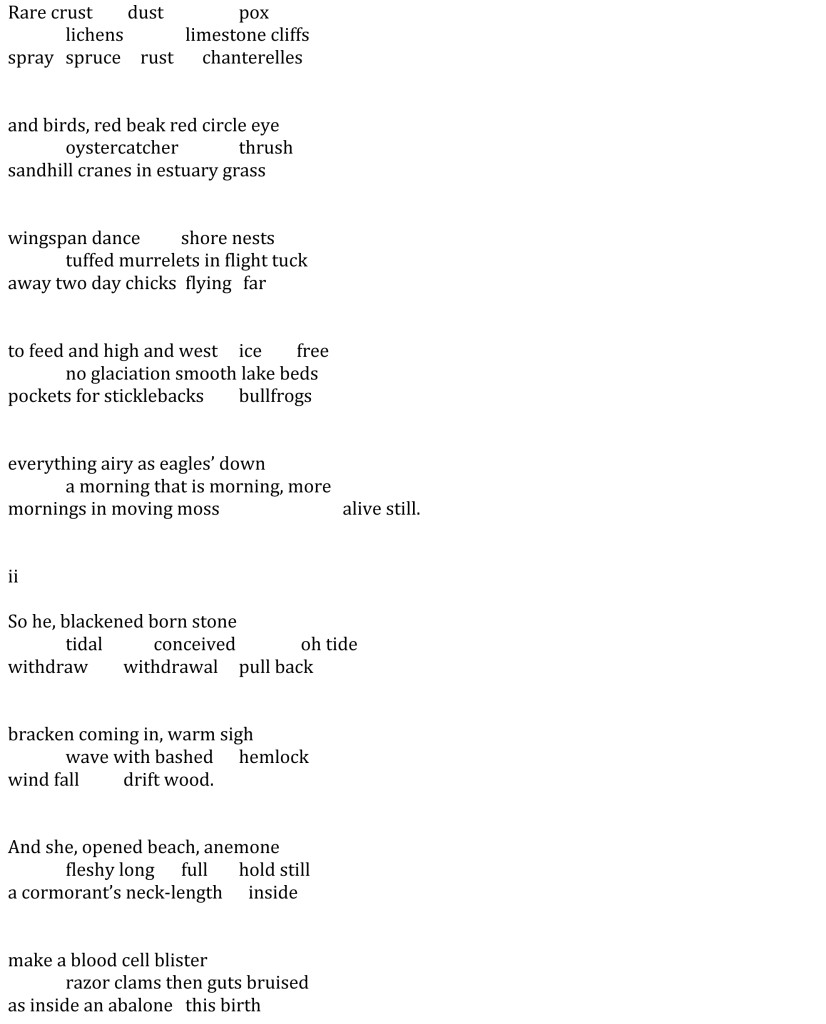 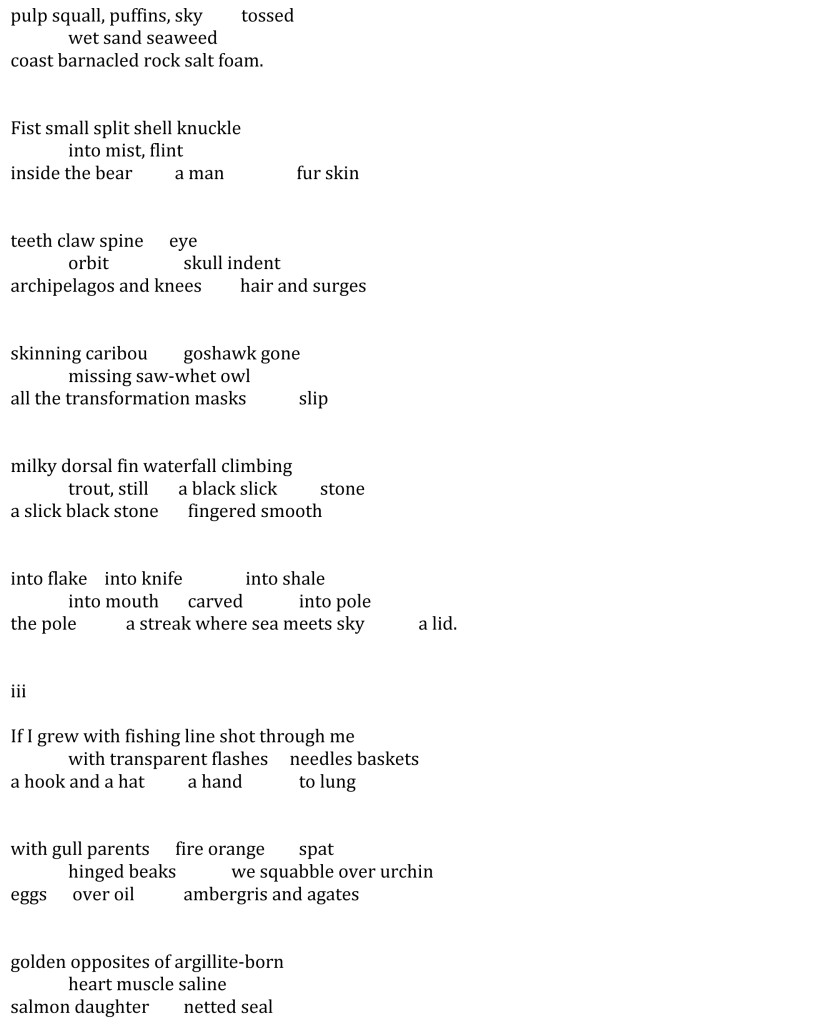 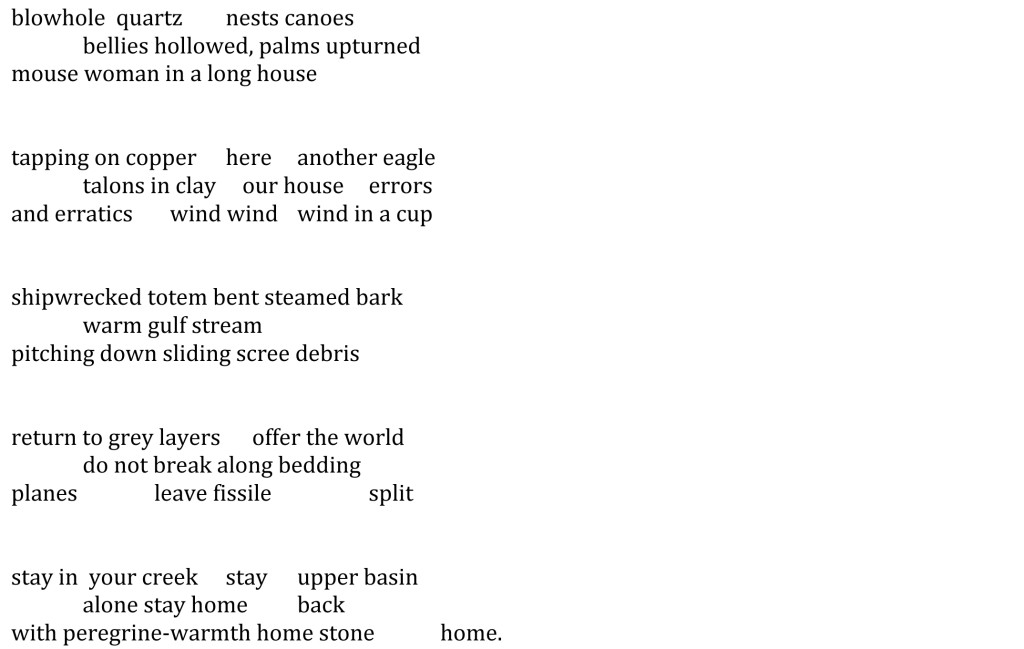 with whale-sized patience for the firm blue sea to split
open, our Canadian cell phones buzzing with text links
to American dialing codes and roaming fee

we want to see, hoping some will be friendlies
breachers or bubble netters, the stench of their baleen
breath fishy and flint and their krilley shit strings

on us and their bulky heads sky hopping, nodding
their bristled faces, barnacled backs, an acrobat’s arc
a hump our hearts hammering standing still surrounded

by ocean and pods and small clouds
on the horizon and sounds like zings, strings
on saw blades they are so animal

but so me too and so close I look exactly into an eye
and then down a blowhole, breathe in her exhale
and know nothing greater. 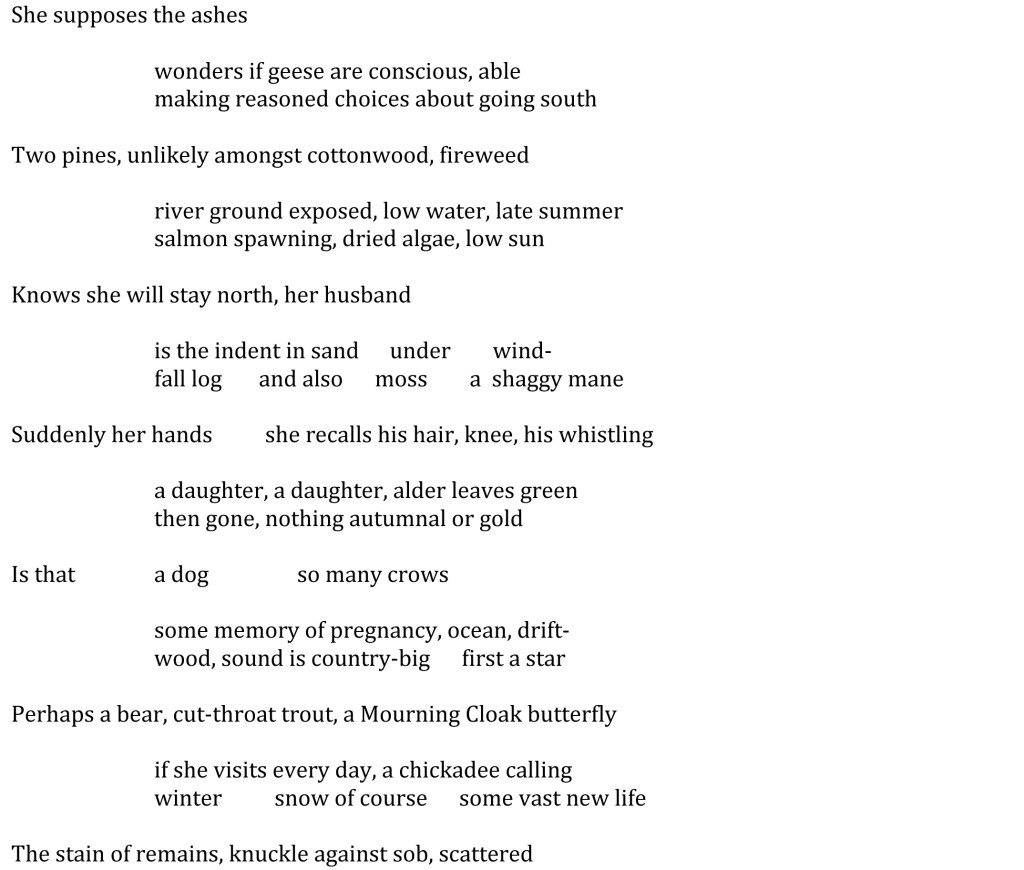 It is summer in British Columbia except
not quite way up here, even though the rivers are
flooding their banks and the ground is loosening and my
sister is living in Munich right now, going to volleyball practices
in the evening after work, working out in purple spandex with her ropey
arms and platinum hair, a bombshell who misses London, the city, the pace
so when I’m driving early in the morning to catch a flight going south, sky as light
as late last night, crusts of snow still in the ditches, I catch my breath at the small
town-ness of it all, at the hard drinking men hauling themselves into cabs
of logging trucks, mine and mill dust floating in the air, a blur, inside dad
are cells so sick it takes everything for him to walk once around
his garden of new sharp tart rhubarb stems sticking almost
like they hurt so red up from composted earth
waxy leaves opening, slackening fists.

WHEN I MARRY FOX

The dishwasher, the Lazy Boy chair, even the lawn
mower broken and useless. Husbandless, I stare full
of envy at the diamonds of other women.

Bear, beaver, and even bull-moose
have all said no. Like a hard-boiled egg
lodged in my throat, loneliness.

And did I mention the selkies? Despite seal
fingered flippery children, their rotsalt stink
of sea and tidal flats, their men are shored. Beached.

Then Fox nip‐knocks for me, leg
lifted, piss‐sharp smell ripe as the ping bite
of high bush cranberries.

His bedroom is lined in downy owl fluff
a neck he cracked years back. At first his teeth
draw blood from my nipples, razory little slices.

He tugs at me like he’s tearing at tough
fresh road kill. Slowly calcification takes hold.
My skin thickens, his winter fur comes in full.

In our new year, when humans are thumbing corks off bubbly
popping party sparklers and snapping open tin-foiled Christmas
crackers, he says: it’s time to sell my hide. Pelting time.

This is what he offers our world. Transforming briefly to man then crawling
back to me, bled. He muzzle‐shuffles gifts toward me, exhausted.
A restaurant packet of salt. A bottle cap. A bright blue Stellar’s Jay feather.

Of course I wait, now I’m a fox wedded wife.
Our milky furless pups flipping inside me.
As if from drowning springs life.

Sarah de Leeuw is a creative writer and human geographer. A two-time recipient of a CBC Literary Prize for Creative Non-Fiction, she is the author of three books including Geographies of a Lover which, in 2013, won the Dorothy Livesay Award, a BC Book Prize granted annually to best book of poetry by a BC author. Her literary and academic work appears widely in journals, anthologies and textbooks. She lives in Prince George and Kelowna, British Columbia.