Come all you haters and see what I have wrought.
Our primary role as teachers is to demonstrate how to best waste time.
I survived Seamus Heaney and all I got was this lousy career.
Monuments are built daily to distraction.
The terms rescuers and salvagers are mostly interchangeable.
Before the sun has risen it is just a bright hill.
Only twenty-four men have walked on the moon and/or behind Jesus.
Crack the spine of The Gutenberg Bubble.
Statistically speaking there has to be a secret door around here somewhere.
Moses flicked his cigarette into the dead bush.
Plan your strategic withdrawal from wishing everyone a happy fucking birthday.
You have 73 important updates waiting.
A more likely zombie apocalypse would be a horde of abandoned buildings.
What we call the sociopaths among us is neighbours.
The number of aboriginal women missing from this line is difficult to estimate.
Heaven don’t want him and Hell’s afraid he’ll go Columbine.
Poets are the unacknowledged escalators of the world.
We all see dead people now.
The subtitles have been subtly lying to us for years.
Sleeper cells awaken and begin plotting in your spreadsheets.
Ennui is an alert that pops up to tell you there are currently no alerts.
The Illuminati left their lights on again.
Bombs strapped to our babies in their dear little TNT onesies.
A Room of One’s Pwn.
If I had it to do all over again it would be a cookbook.
Simply breathing is moving forward.
Every breast exposed in the Sistine Chapel is a new Big Bang.
Another opening monologue has rambled two minutes past commercial.
The emperor of YKK pulls himself together.
Look into the dead shark eyes of our leader.
You are what you contract.
Violence has an exchange rate against the price of oil.
I heard about him but I never dreamed he’d have blue eyes and blue jeans.
Truly elegant equations deserve cartouches.
Naked old men in flip-flops roam the change room with their hanging tits and balls.
Religion is like sucking in your gut while standing on the scale.
Glitter arcs from the TV remote.
There’s been a sudden spike in the number of lives ended on knees in front of a SWAT unit.
I want to die with my boots on or at least my slippers.
Hitler’s ghost slow claps in the silence men call Hell.

It is time to shit in the houses of our dearest friends.
Listening to a child coughing in bed is virtually anxiety-free for me.
Pigeons anoint our monuments with reality.
To-do lists fall over you like shovelfuls of gravedirt.
Given it was a telephone wire you sat on I can’t figure out how it is your pants caught fire.
Our ears crackle as societal pressure changes.
Research all the surprising places the clitoris ends up going.
Origami cranes flock to the watering hole to find only ink.
The solar system is a Venn diagram of unrelated ideas.
I bought my soul back from the pawn shop for twice what it’s worth.
Heaven and Hell stake out opposite ends of the living room and stare each other down.
Imagine the throbbing anger that is The Hulk’s cock.
Rogue currencies exchange significant glances.
Oulipo is poetry’s BDSM.
My cappuccino foam looks like an ass crack I’d like to fuck.
The farmer comes in from the field and wipes the bitcoin from his hands.
Bracketed counters beside folder icons tick up faster.
Look at all the loose feet in this massacre photo.
I insist that this in fact is formal.
Baby Gap is clothes made by babies for richer babies.
Tremolo wisdom warbles from a dozing pothead.
Volume control is a future civil rights issue.
Stick your finger up Saturn’s rings and let’s call ourselves hitched.
Taxis pull up to the crashed planes to wait for fares.
Run away with me from the tumbling buildings.
Who else was stoned to death today?
I hope God is happy now.
Give blood every six weeks whether or not you can find a clinic.
Every idea taken from below like a seal by a killer whale or a reverse cowboy.
Austerity is what’s Owed On A Grecian Earn.
Blinking first is what liars do last.
My sons will never know a world without a mute button.
Flinch at the thought of a broken dick.
That rollercoaster-dip feeling of a plane in turbulence is now an everywhere feeling.
Death’s no biggie.
It’s getting kind of hectic.
Floor to ceiling windows look out onto the tops of your cheeks.
Latest crack smoking video is actually of a fissure leading straight to Hell.
Truth’s unit of measure is the telomere.
Forget poetry and just enjoy the unbridled collecting and hoarding of every last thing.
There’ll be time enough for the important stuff when I’m dead.

The children did not return before dark.
You may have to settle for a Sylvia Plath photo if no Sylvia moment comes.
It’s harvest time at the server farms.
Twelve plus one is an anagram for eleven plus two.
Wineglass stems and bases look like spilling water and pools.
Barricades like department store windows.
At the edge of the woods lovers hump in a dark car slowly filling with CO.
Square roots triangulate beneath round bushes.
Comets have longer tails than other harbingers.
If you connect the dots in the Oort Cloud it reads Do Not Disturb.
The contents of the fruit bowl are a decaying data set in need of analysis.
Some races break their ribbon at the starting line.
Faith’s quicksand forms a pit into which none fear falling.
Marvel at the sheer Elvis-ishness of this moving knee.
The clever sign we crafted to hold up in this audience is sure to get us on camera.
A Sale of Two Titties.
Laptop fan grill burn on the thighs.
Minds invent scenery to impress and explain the body.
I once stood in the Sistine Chapel and what I remember is I stood once in the Sistine Chapel.
Wee Degas moments seem a little sketchy.
Luck carves its nature similar to time.
Power outages dare to split the middle of popular wars.
We will be in the future when we can watch reality TV set in the distant past.
Police chief pulled over in a hoodie.
You’d be surprised how long a 2% battery can last.
Magic rings mingle in toolboxes like washers in baby food jars.
Space seems so empty and wrong without TIE fighters.
Occasionally I forget Libya exists.
Flipped-table-righter is an unpaid occupation known as love.
You’re a Muppet but the hand up your back that moves your mouth is your own.
Amazing Grace sung from the toilet.
Heaven’s fire extinguisher is not WHMIS compliant.
Fireflies batter in unpunctured jars.
One of the bodies has x’s for eyes while the other just reads TILT.
This Polaroid is taking forever to fade in.
Any song for children is creepy if you sing it while weeping.
Roaming charges creep up like a crooked stock ticker.
There’d come a point in the zombie outbreak when I’d just say fuck it.
My black sister and I both want to believe I’m listening.
I’d fuck the me I claim to be.
The shooter fled the scene in an unmarked car. 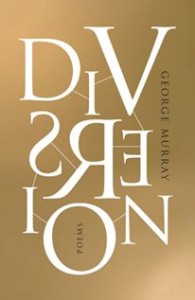 George Murray is the author of six books of poetry, including the forthcoming Diversion, from which these pieces are excerpted (ECW, Fall 2015). He is also the author of one book of aphorisms and books for children. He lives in St. John’s, where he writes and edits.