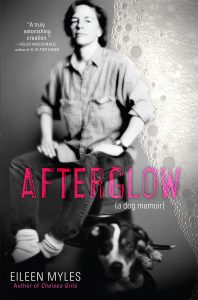 People have feelings about dogs. Lots of feelings. Their antics are one of the Internet’s enduring consolations. I spent a whole morning trying to find a quote of Amy Hempel’s and I ended up in a search results list that told me what I already knew: dogs teach us lessons, dogs are better than people, and dog owners have a lot to say about all this.

Eileen Myles’ new book, Afterglow, is “a dog memoir” whose central node is Rosie, Myles’ late pitbull, but it is not in any conventional sense a book about a dog. In the first chapter, Myles receives a letter from a lawyer whose client, Rosie, is pressing “charges against her owner for a variety of abuses and crimes against dog kind” (3). The long letter is followed by an understatement: “It seemed unbelievable to me” (3). I am a particularly gullible person with an overactive imagination. Later I was trying to describe to my partner the mix of belief and doubt this opening offered. I know it wasn’t actually written by a dog’s lawyer—that would be preposterous—I know the dog can’t talk or accuse. But did such a letter arrive, a kind of prank? I knew the letter was on some level fictional, but I didn’t know which level. When I know a book is fiction, I know to suspend disbelief. When I know it is nonfiction, I buckle in for some facts. When I read poetry, something else happens, I know not quite what. And then there are books like this, legion with genre. I suppose when I know a book is by Eileen Myles, I should be ready for something wonderful and strange, for something experimental and full of heart.

In an early section, puppets commiserate with Rosie about humans: “Humans are always looking for… the obvious. Very low, very base, very banal kinds of puppetry. They can’t imagine their own animation ending. They decided god’s got his little paw in them” (41). We also get Rosie’s reaction to Eileen writing the book, her critique of the ethics not only of dog ownership but also using dogs to feel things, spiritual things: “She was interested in how she abused me—she wrote about it. She wrote about it extensively” (31-2). Then, Rosie, puppeteered by Eileen, of course, confesses: “Okay, so I totally wrote the letter… There’s no lawyer. There’s no money. I … I never said it because it kind of confuses things. I put it in her head. It’s what we always did. She feels she wrote it” (35).

Funny bits like this are mixed up with tender ones: the scene in which Rosie dies at the vet’s office, a chapter listing Rosie’s belongings, a scene depicting the languor of sitting on a porch reading a stack of books with a hand resting on Rosie’s head. “She’s a sweet dying clump,” Myles writes. Later: “I attended my dog’s ass, the collapse of her rear legs that I saw as little high heels… I felt less ambivalently loving than I have ever felt in my life. Now I know what love feels like.” Gradually the book becomes more a philosophy or spirituality of dog-meaning. Dogs are reincarnations of loved ones. Dogs take pictures and give them to us. Dog is the creator of humans: “Dog is lonely, we can see that ‘lonely’ in every dog’s eyes and that loneliness is love” (83).

Thus, it is not only a book about a dog. Sometimes Rosie disappears. And yet, by its final chapter, a spare back-and-forth depicting the ceremony of placing Rosie’s ashes in a stream, the meaning of such things as foam and water has accrued, and Rosie has such a strongly conjured self-ness, that it also feels like it is, of course it is, a book about a dog. Myles has been writing poetry and experimental prose for decades, though they have recently become more well-known partially as a result of their relationship to Jill Soloway, creator, writer, and director of Transparent, in which Myles (and their poetry) appears. Myles is also known for their ideas about gender: “I am the gender of Eileen.” In the early nineties, they ran a write-in presidential campaign as protest and performance. Afterglow gives us little of this active, glamorous life. Instead it shows an inner life of a person and a dog, with AA meetings, the care-work of witnessing a loved one’s bodily failures, and walks on the beach. It also gives us syntactical daring, a singular lexicon and eye. At times I thought: what is this? Why are they going on about foam? Foam? And at other times I was so interested I slowed my reading down as though quieting my breath, my thoughts, to concentrate, to hear and thus to perform the very ideas I was reading. Just when I was thinking what is this, I then was thinking oh, right, yes. And then in the afterglow of Afterglow I felt that the cadences of my sentences were trying to mimic theirs.

Afterglow is odd enough to be frustrating at times, and not all chapters are equal. But it succeeds in exploring deeply how a close other’s mind might wind its way into your mind—offering dreams, pictures, poems. Perhaps we could be better, more dog-like. Myles’ writing feels immediate, spontaneous, true, living in what they call our “thinness” (or vulnerability). “Writing,” they say, “is a sort of performance and text and ideas and bubbles are always frothing & coming right until the last minute” (95). It’s about writing and also about not writing if sniffing would be better. Spontaneity, being in the body, and presentness—dog-traits—are high values here. It’s a strange book from a fascinated mind, from a mind that seems more freed of constraints than, at least, my own.

(I finally did find the Hempel quote, from “The Dog of the Marriage”: “There is much to learn from these dogs. And we must learn these things over and over!”)

Liz Harmer‘s reviews, essays, and stories have been published widely. Her debut novel, The Amateurs, will be published with Knopf Canada in the spring.  www.lizharmer.com