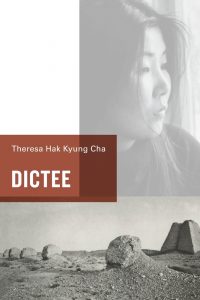 Day recedes to darkness
Day seen through the veil of night
Translucent grey film cast between daylight and dark
dissolving sky to lavender
to mauve to white until night overcomes.
Hardly a murmur
Between dark and night
Suspend return of those who part with rooms
While shadows ascent   then equally fade
Suspension of the secret in abandoned rooms
Passing of secret unknown to those who part
Day receding to dark
Remove light    Re move sounds to far. To farther.
Absence full. Absence glow. Bowls. Left as they are.
Fruit as they are. Water in glass as beads rise to the rim.
Radiant in its immobility of silence.
As night re   veils the day.

Today I’ve been thinking of Theresa Hak Kyung Cha’s “Aller/Retour” which appears in her experimental novel Dictee, originally published in 1982. My copy sits to my right, dog-eared and underlined. This poem appears in a series where we will explore other authors interactions with the text.

This poem has been posted with permission from University of California Press.