The facts about Xanthippe are scant: her name, her marriage.
Her husband’s words are only reported by others,
so, really, we can’t be sure of much.

Plato’s Phaedo has an aside
—you know her—
that opens a door to a familiarity that could damn, but
otherwise she’s depicted as a mother and a wife
at the edge of mourning.

Xenophon’s Symposium gets more quickly to scorn.
Alluding perhaps, to the roots of her name,
she is likened to a wild horse,
the most challenging to ride
to give skill to the rider.

All else has comes after. References rest
on making her the ill-tempered wife. Shrew.
Shakespeare did it. Chaucer before him.
Henry Fielding. Poe.

Another one of misogyny’s idols?
Beatrice the Unrequited
Yoko the Interloper
Godiva the Temptress
Penelope the Chaste
(something else
to her suitors,
I’m sure)
Xanthippe the Nag

Joyce, perhaps a smidge more generous:
What useful discovery did Socrates learn from Xanthippe?
Dialectic, Stephen answered: and from his mother
how to bring thoughts into the world

Thus far, the hard facts
have been thin on the page.
Quotations and citations, sure.
Conjecture, certainly. But facts?
(beware: misogyny often claims
facts about women aren’t real facts)

I’d like to imagine X. not endlessly being obliged to others,
not having to prove the others right or wrong. I’d also like to imagine
S. singing a rendition of Always on My Mind for X. at karaoke.

What if the sixth of December rolled around
and they asked each other:
do you remember where you were?

Remind me, what time of the day you were born?
Let’s do our charts.
Let’s try new cosmologies.

These women endure orbit in the company of
their assailants and detractors,
but their choreography of witness
is clear:

They were there, circling the sun.
They’ve persistently been there
and they knew: M.L. was no young man.

They were there, circling the sun.
They’ve persistently been there
and we know.

“Facts about Xanthippe” was written after reading Sina Queyras’s interview with Sue Goyette (“Women, Epic, Live Wires: In Conversation with Sue Goyette“) in December 2017. The poem is part of a book-length collection. 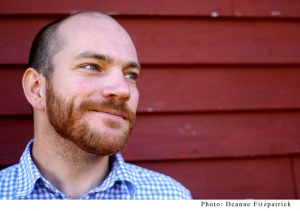 Bart Vautour lives in Halifax/Kjipuktuk with his partner, daughter, and Marley the dog. He is a writer and researcher who, among other texts, is a co-editor of Public Poetics: Critical Issues in Canadian Poetry and Poetics (2015).