This Wound is a World, Billy-Ray Belcourt. Frontenac House (2017). 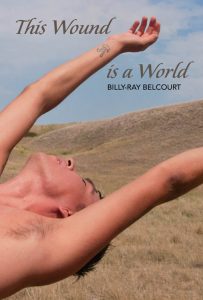 In her essay “Queer Feelings,” from The Cultural Politics of Emotion, Sara Ahmed writes, “Sexual orientation involves bodies that leak into worlds.” Billy-Ray Belcourt’s collection of poems, This Wound is a World, is “the water that comes before new life,” carrying a promise of possible world-building. Belcourt is both queer and Indigenous, writing from an intersection of marginalities at which he carves out room for re/defining what it means to exist at such a crossroads. He explores the potentiality of queer Indigenous sadness as a generative starting point for community building and kinship, for finding alternative modalities of existence beyond the neocolonial matrix of contemporary Canadian literature.

Some poems are elegiac, like “A History of the Present,” whose title speaks to the impossibility of untangling “then” from “now.” It eulogizes Colten Boushie as “a ceremonial fire keeper,” and feels especially poignant at the present moment. Elegies within the collection are at times direct, at others, more of a sonic hum, a sort of ongoing memorializing ritual: “once a week / i curate / obituaries / on my facebook wall / without even trying.” Belcourt writes against the dominant narrative, refusing the incapacitating totality of ongoing colonial violence. He delineates futurity, creating trajectories of Indigenous possibilities like fractals: even though “the future is already over…that doesn’t mean we don’t have anywhere else to go.”

Belcourt finds creative energy in heartbreak, which he writes and rewrites, first as a flirt who texts a personified love, “if i am a haunted house, then let’s make up a theory of negativity that notices the utopian pulse of sad stories like ours,” and then as “an enactment of grief / whereby one ropes strangers by the tongue into a collective wounding.” Potentiality grows out of this “collective wounding,” this agency to theorize negativity but also the self and/in community because “grief is a way of making claim to the world.” Rather than just reclaiming the world, Belcourt imagines new alternatives, subversive counter-narratives to the settler version of Indigeneity that, when “[ontologized,]…[conjures] sadness and death.” The utopian pulse beats against the deadening present, ironically hyperbolic because, if one is to imagine the future, why not imagine it abundantly blissful? In a collection that rejects the delimiting of the human body, the future takes on its own sort of radical embodiment.

Belcourt’s is an unbodied poetics. He writes that Indigeneity “troubles the idea of ‘having’ a body”; “sometimes bodies don’t always feel like bodies but like wounds.” But being “wounded” does not have to mean to be “falling apart in a bad way.” To return to Ahmed, if “bodily and social spaces leak into each other [and] inhabit each other…the nation becomes imagined and embodied as a space.” Belcourt decolonizes CanLit by rejecting the nation itself. If the nation is embodied as a space, queer Indigenous literature is resistance as unbodiment. The very idea of “leaking,” of bodies “that leak into worlds,” is queer in its abjecting sort of “grotesqueness,” its refusal to be contained by the temporal vessel of the body.

Another queer Indigenous poet, Joshua Whitehead, asks in his online Addendum on Indiginegativity, a sort of letter to Hal Niedzviecki in response to the Appropriation Prize, “Who is CanLit? Is it not a nation-building project?” Belcourt and Whitehead both write within and against CanLit, resisting a settler-colonial state built by language—oppressive language that makes Belcourt feel like he is “maybe…a figure of speech. / [or] maybe [his] body is an inside joke.” He wants out, and “out” in this case means queer, means leaky, means living “indigeneity [that] exceeds and is exceeded by gender.” Whitehead similarly gestures at leaking as productive sadness in his claim that “crying is an act of aggression, [and] tears are rivers that etch space.” Belcourt’s poetry dialogues with such ideas, for example, when he writes, “sometimes my kookum—,” the Cree word for grandmother, “—begins to cry / and a world falls out.” While the visceral and theoretical are ostensibly incompatible, Belcourt’s poems host a revolutionary clash of registers and explode language from within: another iteration of tangible overflow.

Belcourt’s body, which has been subject to marginalizing inscriptions against both queerness and Indigeneity, tethers him to a world in which “native means lonely and lonely feels a lot like dying.” He escapes this associative “death” by overflowing the body, exceeding its limits, and remaining unfixed. What solution does he offer? Love: “love is the clumsy name we give to a body spilling outside itself.” Spilling resists fixity, and Belcourt acknowledges the ephemerality of acts of intimacy, whether platonic and familial, such as the moments with his kookum, or sexual- and lust-driven desire; “to be native and queer / …is to bandage the wounds with strangers / you met an hour ago.” These polarities of love, and all of the points in between, are generative. Eventually, the “wounds start to work like bandages,” and loneliness becomes “an affective common of sorts.” “Everyone is lonely / but no one knows / what to do about it.” Belcourt takes this existential loneliness and, within it, envisions a heaven in which “everyone / [is] at least a little gay.”

The title of the book implicates the body and colonial trauma that exceeds the body as thematically relevant. Belcourt finds in “woundedness” a potential for transforming what leaks out into a sort of world-building ectoplasm. If “the body is an assemblage…of everyone who’s ever moved us, for better or for worse” (59), Belcourt builds a world from this love, from these relations. The alternative world is one in which the body is not central. The body does not delimit queer Indigenous potentiality or the “utopian pulse of sad stories.” While Whitehead acknowledges that “CanLit is burning…[and he’s] waiting to relish in its ashes,” Belcourt writes Indigenous literature in which “native boys / find each other’s bodies / … each kiss [is] an act of defiance / a kind of [radically different] nation-building effort.” As he gestures at the importance of staying connected to others, poetry is what leaks onto the page, leaving “the abandoned house of [the poet].”