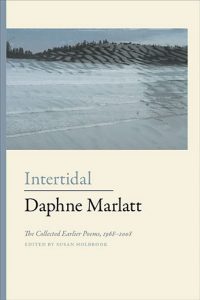 We went to see Daphne Marlatt read as part of Writers Read before we got our hands on her new, recent collection of poetry. It was a great reading, but it hardly prepared us for what was to come. Spanning several decades and roughly 600 pages, Intertidal: The Collected Earlier Poems is united by Daphne Marlatt’s consistent voice and interests. The collection results from both a commitment to collaboration, and an enduring engagement with the natural world and the gendered body, which fundamentally informs the author’s entanglements with feminist ecopoetics.

Susan Holbrook’s introduction to Intertidal highlights the importance of Marlatt’s collaborative practices, noting that the poet has written a number of texts “in generative partnership” with other authors, which speaks to her belief that “writing is a process of cooperation with language, her position that all writing is as much collective as individual. However, this outlook brought with it certain challenges when it came time to collect Marlatt’s work, specifically when it came to how to handle her collaborations with other writers. Holbrook outlined questions that emerged as the collection was developed: “Do we extricate the text contributed by Marlatt? What about the writing published without attribution, most notably the works co-authored with Betsy Warland, where authority is displaced by a more fluid reciprocal exchange?”

This line of questioning reveals a conflict at the heart of this collection. Marlatt’s collaborative practice fostered generative links to other artistic practices and cultural nodes; she contributed to the influential Canadian poetry newsletter TISH and helped found Tessera, a ground-breaking bilingual feminist literary journal. The same connections that make the existence of these poems possible equally makes compiling them difficult. Collaborations push and pull at her body of work.

In addition to working with various writers, Marlatt folds others into her texts by writing to them, for them, about, and around them. In a poem dedicated to “Karen, four years old,” from the section What Matters (1968-70), Marlatt writes, “a slug / in a bed / no one covers.” And later, “a hug / is the best / earth can give.” The author approaches a “gross” creature like a slug lovingly and paints an endearing image that, both by nature and as a result of the poem’s exhalatory line breaks, suggests that the reader slow down. The poem itself enacts a kind of hug, doing similar work to Marlatt’s iconic brackets. In the section “focusing” and Other Later Poems, the poem “Aftershock” “for Bridget,” in which “earth’s on the move like us…as you / wipe your eye…I / only have eyes for / you.” The earth returns, as well as the body—both of which bleed into each other and become one and the same, an embodied landscape and a landscape embodied. Marlatt’s collective writing practice goes beyond large-scale literary collaborations, from Intertidal to intergenerational: her dedications to young readers, for example, extends an invitation into the world of poetry.

The importance of the body in Marlatt’s work is another unifying interest. Marlatt notes: “Well, to begin almost at the beginning for me, with the breath line and Charles Olson’s approach to poetics, taking the body as a primary location for scoring the line on the page. I was very interested in that.” The breath line runs through the work, one of the experimental consistencies that link the texts collected here. We witness Marlatt’s development of an early feminist ecopoetics, now a broad field of inquiry which echoes in the poems of writers like Juliana Spahr. Marlatt’s political and environmental investments, which always return to the body, are echoed in Spahr’s poem, “Dynamic Positioning,” in which she writes, “Water, all pushed by the rising and / Expanding gases followed by more, / By high pressure oil, gases, other flu- / Ids, all there rising.” This wet, almost erotic political critique invokes Marlatt’s voice and tactics, flirting with a Marlatt-esque enjambment that gives the poem a spilling feeling. Other consistencies range from an ongoing lyric poetics, to an engagement with the epistolary, to the exploration of punctuation.

One characteristic tactic that Marlatt employs in her poetry is her use of brackets, which often evokes the sensation of a lyrical “spilling.” This tactic becomes very clear retrospectively—rarely have we seen brackets do quite as much work as they do here. Brackets encompass what the eye takes in as a glance [“(mirrors, chairs)” from Vancouver Poems]. They embody the synaptic burst of memory that fires as the eye meets the hook of that memory [“Heart beats (mine must be for him a constant ambience, yes, recording, over & over)” from Rings]. Frequently, they open and don’t close, the open bracket endlessly reaching forward. 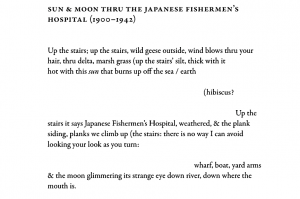 The collection ends with a hanging “because.” This poetry refuses to be tied up—rather, it leaves the thread to dangle, tempting readers to pull. Ultimately, to think of Marlatt’s work as something that can be shaped is to misconstrue its state of matter. Properly, Marlatt’s poetry is liquid, not solid: it fills the vessel it is poured into, but is not formed by it. Though carefully and delicately contained here, it is always prepared to run towards the sea.