If decadent, we were destructive
If decaying, a nuisance
If we were multitudes with wants and ligaments, we were feral
If we undressed, it was to tease
If underground, we were found wanting
If off-world, we thought we could be pardoned for our violations
but we were off the mark
If we obsessed enough, we hoped for some kind of obliteration or abeyance

At street level, we displayed signs of unrest
We sought justifications that had been lost or misplaced, even
misunderstood
At street level, we hoped to be vindicated for our future revolutions
But when the clock struck noon, we lost our bearings
Though we kept moaning for a while longer

If we stood before a precipice, we were anathema
If we fumbled with the lock, we pre-empted a history
If ultimately we were fodder, we were _____

At our feet, a wreckage, a beached concept
We sought the sentient now, a knotted present, a wild recovery of sentiment
On our feet, it mattered that we resisted, looked for signs
But when the time came to decipher, we became infantile
Parasites who’d lost their sense of _____

If we lingered, it was because we needed to go on somehow
If we emptied, it was because we had nothing else to give but our insides
If we were uncontrollable, we were put in a yoke
If the days were wonton, they were not injurious to our violent outbursts
If we built new temples, we used fleeting ideas that would slip easily through the
fingers and dissipate

At eye level, we were volatile, full of demands and antecedents
At eye level, we waned scientific, spoke in discourses and legalese, feigned an air
of being on the inside, in the know
But in our vulnerable flesh, we were troubled, out of focus
The vast regions of our profound unknowing made our skin itch and our palms
sweat
So when the sky went dark in mid-afternoon and our shadows all but vanished, we
let out a prolonged, terrifying scream

If words were our burden and proof, they were our distraction and absolution
If across the void, shrieks and oars slapped the water
If we entertained, the parody in our mouths tasted of sulphur, alcohol and irony

In time, we were consigned to history and its many versions
In utterance, we wanted telling
In being, we wanted to exist in a grey zone, a permeable fissure, in animal
communication and comprehension

If sinking in the mud, we became a ridiculed gesture
If mobile, we reconfigured
If the elements reversed, they briefly stopped us in our tracks
If stopped, we dared to risk, grab the lead-grey reins of chance
If we knew our species to be corrupt, we hoped that it may yet be salvageable
That on rare occasions, we would feel a storm rise up inside another and respond 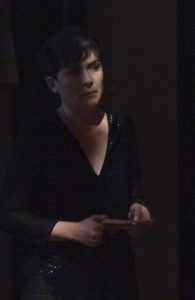 Oana Avasilichioaei’s current interests include polylingualisms and intermediary spaces between words, sound and image. She explores the transgressions of these terrains through poetry, translation, performance and sound work. Her five poetry collections include We, Beasts (2012) and Limbinal (2015), a hybrid work on notions of borders, and her most recent translation of Bertrand Laverdure’s Readopolis won the 2017 Governor General Literary Award. Current projects include Eight Track, a poetic, sonic investigation of tracks/tracking, and a libretto (www.oanalab.com).