Looking after yourself is hard if you’re not much of a people person.

Once I entered the doctor’s office and was photographed by a robot receptionist whose one eye was a camera and whose mouth was a printer that printed out an ID photo of me.

Looking at this photo, I could see that my body was different from the ones surrounding it.

My body was less luminescent than it used to be.

The robot pointed toward the bridge between reception and my doctor. It was long, spindly, and inspired a sense of fear in me.

Perfect balance was required to walk across the bridge, and even if you managed that, there was still the threat that the many security guards policing the bridge might push you off the edge for arbitrary reasons.

Before they pushed you they said, apparently fear is a factor for you.

I got the sense it was do it or go off the edge, but I couldn’t do it so I had to pretend.

I made it to the doctor’s office because I am extremely practiced in acts of pretending including walking, illustrating a cando attitude, not seeming demoralized, not seeming defeated, not having body language that communicates disinterest. I am lucky.

My doctor promised me I wouldn’t go off the edge.

She said I can promise you right now, unless you go on an ayahuasca binge, you are not going to go off the edge.

Unless you do LSD or any other drug, unless you do weed or have a family history of schizophrenia or drink or smoke anything or don’t do sleep routines, or don’t do guided meditation, or don’t drink valerian tea or passionflower tincture and kava root or ashwaganda and put magnesium citrate on your feet and stop getting medications from the street

and as long as you don’t don’t go to work or don’t go to blink fitness or don’t stay distracted or don’t have too many conversations about it and stop blaming everything on capitalism and stop wishing you were a cat or asleep or dead then you won’t go off the edge.

She said that I was totally fine except for my biochemical problem. Let’s call it our little biochemical problem she said, and tapped her toe, the reverberations from which were enough to send the thin glass in the window of the room shattering into thousands of micro shards, half of which entered me and I shimmered all over.

Do you feel as if fear is a factor for you? She asked me as I sat in front of her reflecting thousands of light particles entering from the now open hole in the wall off my glassy body.

I asked to be shown the door but my mouth, full of glass, could only make the sound of two cars smashing into each other, each off their windows and windshields and back windshields shattering into thousands of micro shards and raining down on the street.

Outside the hole in the wall there was a food service employee and a retired gymnast and a retired social worker and a retired non-profit sector administrator on the street trying to get their hands on something.

The social worker was thirsty the food service employee needed more light to see the gymnast was cold because he was only wearing a tightly-fitting pair of work-out shorts that no longer fit his body and it was winter and he was tired.

I went out onto the street, shards of glass twinkling behind me.

I was a slug if the trail of slime was glass and the body of the slug was dressed to impress in professional separates, having kept everything subtle like perfume, makeup and accessories.

We walked together on the wet glass-covered street which resembled a tongue leading us into the mouth of the hospital which would give us back our name tags to go back to our professions.

I couldn’t sleep the night before I went into the mouth.

I couldn’t sleep because they told me the day I went into the mouth I would have to come up with one way for each of the other professionals to do their profession better, and I didn’t want to because I knew as soon as I told on them, they would be pushed off the edge of the bridge.

All my friends are suffering, I realized, are being flicked backwards via massive state-sponsored tongue into the gut of the city which was the hospital, the credit card, the penal system, the healthcare bill.

Are we being pushed off the edge of the bridge for no reason? We started to ask ourselves. For some, this idea was enough to make them go off on their own.

I can’t even see the bridge. I can’t see the street I have to walk on. Most of us are bound together by a fabled origin story, a history presented deliberately obscured.

We are drinking cloudy water. We are commenting on a video of white noise. We are swallowing food made from something that ate itself before becoming food for us.

We can’t love what we can’t see. This is what I realized. This is what I wrote down on note paper, flecks of blood dotting the surface like stars. I passed my note to the gymnast. I think I am becoming someone who could rightly fear the unknowing more than the edge. I think fear was always a factor for me. I imagine a pool of clean water underneath the bridge. Before I go, I want to feel the wetness on my feet. I want to feel the unsolidified nature of everything and shine upon it the resistant spotlight of clarity. Then I want to jump off and go swimming with my friends. 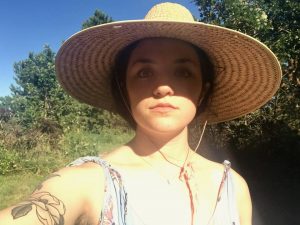 Phoebe Glick is a writer concerned with preserving queer intimacy under the authoritative State. She has a chapbook called Period Appropriate (dancing girl press, 2016). Her writing appears or is forthcoming in Cosmonauts Avenue, Apogee, Entropy, Queen Mob’s Teahouse and elsewhere. She edits The Felt, a journal of otherworldly poetics. Be her friend @phoebeglick.