At an event people sit in a circle (or is it a spiral?)
around Jacob Wren, Aisha Sasha John
and Adam Kinner. I met Adam Kinner years ago
as a saxophone player and since then he has evolved
into a dancer a performer an artist I expect also a writer.
I recognize about half of the audience.
This makes me feel like a part of this city
a sense of intellectual endearment suffuses the room
it could be rearticulated as pretension
but it isn’t or it isn’t for me tonight because
I don’t feel anxious as I sometimes do at literary events.
Aisha Sasha John enacts a form of authority
which means leading while caring for the audience.
There are sentiments of self-care radiating collectively
over the audience it might be an experience
or it might be elementary school but when she asks
for a moment of silence I wish it were longer
in fact she later acknowledges that she also wishes
it had been longer. Aisha Sasha John asks for a moment of silence
and especially after the text she’s asked us to read as a group
including the phrase “praise the lord” repeatedly
I sink into the expectation of prayer
I feel my mind clouding with words and
I linger between wanting to make space for silence and letting words enter
realizing that the word word is similar to the word and
even though not fully. Then Jacob Wren gets up
and stepping into the expectation of performance shocks surprises
by reading a section of a second chapter of a new novel.
Shocks in the sense of is a reading a performance?
The first impression of cop out then the sinking in of brilliance
the layering of performance which is only a meditation
on the fact that reading aloud in public is of course a performance
even if it seems more scripted or coded as Aisha Sasha John later says
or an act of improvisation within a structure.
I put my head within a knitted suture and let kindly thoughts
bounce between the heat of the winter and the warmth of the event.
Behind me I make a pact with a poet I admire to both
send work to a journal by the next day’s deadline.
As we walk away feeling content in having attended
strengthened in having witnessed strong minds
for the present without animosity I find something critical
to say and this lingers in need of absolution.
Yesterday my friend said that she has never in her entire life tried
to change a pattern of behaviour and I say that I am constantly
hemming myself in in ritual attempt to be better. 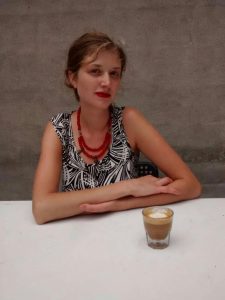 Klara du Plessis is a poet and critic residing in Montreal. Her debut collection, Ekke, was released from Palimpsest Press, Spring 2018; and her chapbook, Wax Lyrical—shortlisted for the bpNichol Chapbook Award—was published by Anstruther Press, 2015. Klara curates the Resonance Reading Series, and is the editor for carte blanche.