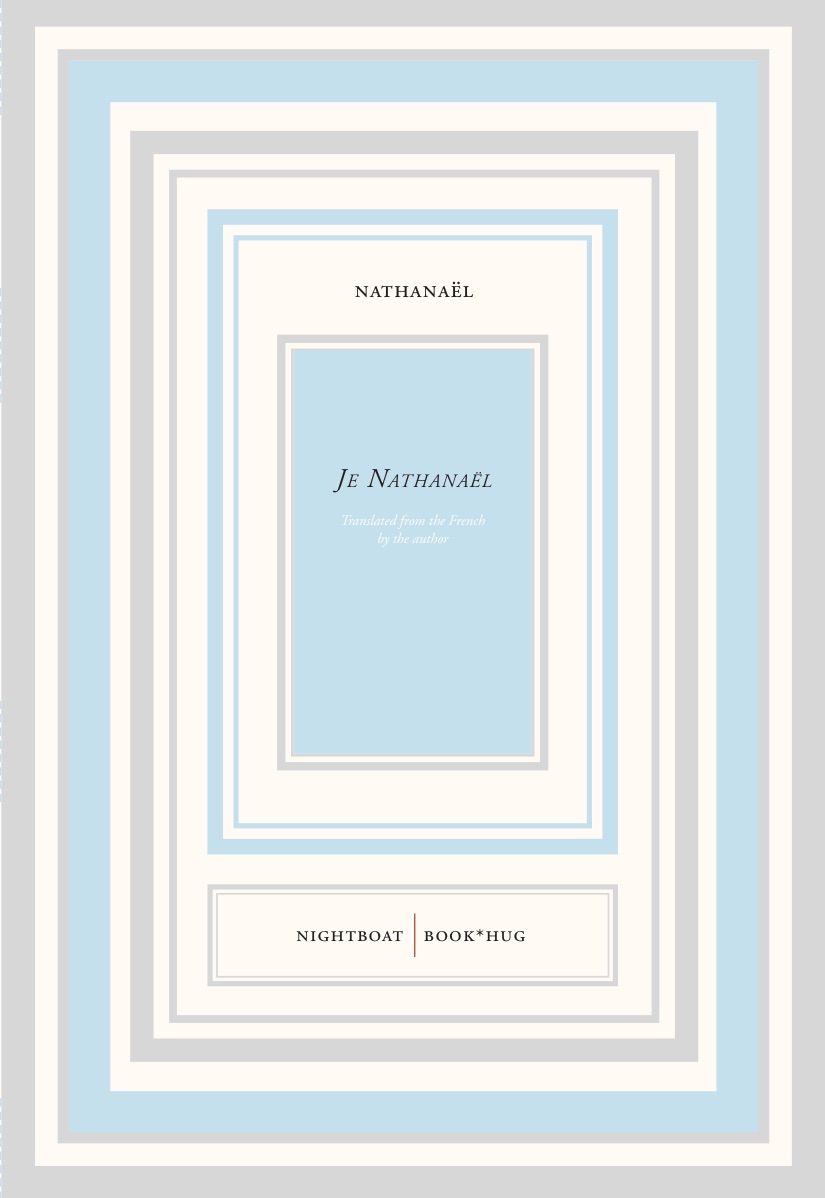 Tatum Howey: Nathanaël is what we wish we could be. Nathanaël is the consequence or possibility of fruition of our actions. Nathanaël embodies what we desire. Desire makes you aware all that you have not possessed, what you have missed out on. But desire also shifts the I, displaces the possessive pronoun, shifts away from I onto the you. What is the you? Is it the lyrical “you of poetry”? Or is it the disappearing I, the dissolving of the autobiographical self? And if it is the lyrical device of addressing a “you,” are you invoking a sort of Muse with Nathanaël?

Nathanaël: These are interesting readings. You understand that I am not in a position to account for certain aspects of a text, even if it bears my signature (in this case a false one). I would say though, broadly speaking, that a pronoun only becomes possessive once it lays claim to something. When re-entering this work for its republication, I was reading and rereading Oscar Wilde, and André Gide on Wilde, and wanting to consider this I, which is first and foremost a je, with its two letters in French—and no injunction to capitalisation—, which is far from anodyne, and in utter agreement with Wilde’s admonishment to Gide concerning the first person. I don’t mind sharing with you a discarded portion of the very brief postface I wrote for the English-language edition:

If the English language cannot abide the first person, French is less reflexively squeamish, perhaps because its syntax allows severally for its amputation, or a certain degree of discretion, through contraction and a series of pronominal articulations that don’t rest so heavily in a self, and that to some extent at least go unpronounced. The following anecdote recounted by Gide (1905) in his souvenirs of Oscar Wilde may be exactly an articulation of such discomfiture: “At last the carriage stopped; [Wilde] bade me good-bye, and was just going to get out, when he suddenly said, ‘listen my dear friend, you must promise me one thing. Your ‘Nourritures Terrestres’ is good, very good, but promise me you will never write a capital ‘I’ again.’” To leave the matter there would be to grant French too much latitude and to discredit Wilde’s caution. Perhaps it is that whatever is intended by the capital “I” is a discredit to its body of reference and the senses by which it suffers its numerous articulations, into the very skin of its necessary evasion. Language was never intended to be spoken.

Of course there is no capital I. This is a rather clever invention of the translator, who re-inscribes in English Wilde’s words such as Gide recollects them in French. (Wilde was a very eloquent French speaker, and for example, wrote his Salomé in French directly). It was Wilde’s experience of prison that caused him to write one of his most powerful works, The Ballad of Reading Gaol, and the presence of the narrator in the poem is effective precisely as an inadvertent witness to acts also acted upon himself, or scarcely averted (execution). Albert Camus contends that all of Wilde’s work is the artificial creation of a frivolous life until after Wilde’s prison sentence. That is disputable, but it is true that it is at the moment at which it loses its footing that it takes on such a powerful accent (here and in De Profundis). I don’t think I have strayed from the topic. Because I am speaking to you of questions, and of texts, that co-exist in my thinking through the existence of a work, whose very manifestation is predicated upon its disappearance. It is because Nathanaël cannot say I that there is such a book as Je Nathanaël. And certainly the third person will only ever lose the trace of such a figure.

TH: André Gide in his Fruits of the Earth says: “[y]es, it is true––my youth was spent in darkness. / It is that I repent.”  Je Nathanaël also, at times, feels like a confession, a revealing through repetitive commands, or better, utterances. Confessions are not recorded but seen. Theresa Hak Kyung Cha writes of “the desire of giving image to the word in the mind of the confessor,” Is it confessional because of a failure of language, so that we must instead create an image out of relation, of sameness?

N: The confessional is of no interest to me, and confession is a term it would never occur to me to associate to this or any of my work. I write in fact against the confessional, or in any case aware of its solipsistic trappings, and have no interest in convoking monotheisms to my texts other than to dispute them. My work is resolutely atheist, and my point of view is describable as antinomian, though even these parameters feel restrictive; in this, it claims also a certain distance from Gide, and greater proximity to Oscar Wilde despite his adoption of Catholicism later in his foreshortened life; largely, I suspect, for its pomp and theatricality (though it is Gide who wrote Les caves du Vatican, as in so many texts, expressing deep ambivalence vis-à-vis his religious schooling). But it is more than this. I do not wish to reproduce what strike me as some “hysterical” strains in contemporary writing (for me the contemporary reaches back a century)… in which the I seems to justify just about anything. And on the contrary, despite the ludicrous affirmations with which this hapless society congratulates itself, the self is not ever reason enough. The self is nothing without a history that is greater than it. And it is even less without the conditions of reciprocity, which require, always, for the I to be displaced in order to receive the you by which it may well be obliterated—even and especially a you from which it is severed, in death or otherwise (convention, language, etc.). But even the je is always dislodged in relation to itself, and fails at being the referent by which it seeks to be recognised. In that sense it is entirely untranslatable. And perhaps, then, untransmissible. In Les nourritures terrestres, I am particularly sensitive to Gide’s invocation of attentes — or expectations, literally, waitings. Of the permanent verge of departure, and the eradication of the present through its sensorial emphasis. To exist so permanently in the present is of course impossible, and the senses convoked to such a demand are exceeded by their own reach. But all of this is difficult to account for without understanding the condition of Je Nathanaël, which is of a text split across (at least) two languages, and for which neither is a mother tongue, for which neither functions as origin, and by which doubling the text cannot claim itself as antecedent. Recall that in Les nourritures terrestres, the convergence between the narrator and the one he imagines as Nathanaël, becomes possible at a moment of impossibility: when all the books have proven themselves to be unreadable, and Nathanaël is summoned to take interest in the rest more than in himself. This is desire at its greatest intensity, with its permanent elusion of fulfillment.

I would add only this, to bring this back to the matter of confession, that if there is anything resembling this in this or any of my work, it is in a criminal investigatory mode, in which evidence is sought in the form of testimony (which is near testamentary), an I made accountable to something that is incapable of residing in memory. In this respect it is more akin to accusation.

TH: Je Nathanaël is set to be republished in the Fall of 2018 in conjunction with Nightboat Books and BookThug. Why the decision to reissue? And can you speak to the changes in the text?

N: This is a far more difficult decision to account for than one might think. But since the book is out of print, and since it seems to want to continue to circulate, and since I wished to correct the book’s signature, it seemed an obvious decision. The co-publication will allow the book to circulate with greater ease in the U.S., which is where I live, and for it, concurrently, to continue to exist in Canada; additionally, and most importantly, it will include an afterword that Elena Basile has generously agreed to write for it. The book will simply continue along, with its proper name, and its time signature made visible.

Interestingly (perhaps only for me), Je Nathanaël went out of print in English and in French simultaneously. Both will be re-issued under new guises in the fall. The changes to the English text are minimal and affect maybe three or four words, and largely concern the last page of the book. I wished to address decisions I had made when I first re-wrote those passages in English, which I see now are excessive and whose departures from the French are unnecessary. But I would add, too, that the I who makes these decisions can only act in retrospect, and my tendency is to leave a text such as it was written, out of respect for the decisions made at another time, through another experience of the world, in the body, then, such as it was, with all its scratch marks visible.

Nathanaël is the author of more than a score of books written in English or in French and published in the United States, Québec, and France. Recent works include Le cri du chrysanthème (2018), Feder, a scenario (2016) and Asclepias: the milkweeds (2015). Nathanaël has translated works by Catherine Mavrikakis, Frédérique Guétat-Liviani, Danielle Collobert and Hilda Hilst (the latter in collaboration with Rachel Gontijo Araújo).