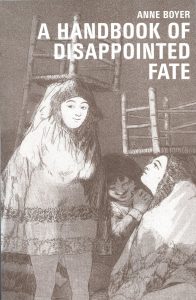 Against late capitalism’s yes, cruelly optimistic in its desire for automatonic affirmation of its circulation and law, Anne Boyer’s A Handbook of Disappointed Fate repeatedly says no. Throughout Boyer’s collection of essays, statements of negation and refusal are speech acts that ally “with the movement and force and accumulation of bodies” harmed by the system and its predatory, “stupid logic of dinner.”

When Boyer arrived in Kansas City in 1996, the same year that Robert Altman’s Kansas City façades were constructed, she initially “refused” to identify as a poet, and, instead, entered “whatever was not a poem, working in the shelters and community centers… and thinking the only possible life was a life of politics.” Now she allows that “poetry is also [her] city,” and writes of the multifold cities, both past and present, inside and outside of Kansas City—of the way that capitalism, racist and patriarchal, verbalized and enacted, has formed the civic hierarchy of the digital age and fractured and/or double-bound its content, the bodies of its inhabitants. In syntax that is frequently complex-compound, Boyer acknowledges the numerous people that a sentence and a place can contain or oppress. She writes, for example, after Bill Clinton’s “Personal Responsibility and Work Opportunity Reconciliation Act,” of:

[…] the exhausted mothers who, as welfare became workfare and life constricted into an impossible bargain, had to choose between abusive partners and living in their cars or the unsafe living rooms of people who might and did hurt their children, who had the optionless-option of continued personal abuse or the impersonal abuse of the shelters and privatizing welfare system that regularly humiliated the mothers for being poor, for being unmarried, for having been women of color who had children or women of any color who had children by many fathers or white women who had children with fathers who were not white.

She writes with critical tenderness, as well, about who she met at Occupy Kansas City. Riffing off of Bo Diddley, Mary J. Blige, Lyn Hejinian, Willie Nelson, and Jo Spence, she poses questions about how, and why, and to what event, the self is made in the neoliberal frame. She observes that Kansas City’s façades still stand, and, dilapidated, have become “their own… ruined mask on ruin,” a “poetic problem.” However, she rightfully distrusts her observation that this is a poetic problem, since poetry’s traditional citizens have been guilty of “admiring and profiting from and colonizing the suffering or tragedies of others.” Boyer understands the limitations and complexity of her positionality, and that the “no of a poet is so often a yes in the carapace of no.” But she reaches further, beyond passive, self-reflexive irony and mere syntactical transposition, towards a radical, embodied poetry that cannot be separated from the multiplicity of hands that hold it.

A Handbook of Disappointed Fate solidifies the bond between the linguistic/cognitive and material/societal realms—a bond which can connect, or stutter, or sever. For instance, “How to Go From [Poetry to Art]” might emphasize the precedence of the object universe, and “How to Go From [Art to Poetry]” may argue for the higher, cerebral pursuit of words, yet the two essays are spliced, printed side by side in chiral mirroring. The reader is made acutely aware of their physical interaction with the text as they have to skip every other page and then backtrack (that is, if they attempt to read the pieces in linear isolation). Simultaneously, Boyer proposes liquid modes of dissolving dualisms and resisting the anti-intellectual and impassive state of techno-capitalism. “Take Up and Read” offers her wet, temporally immersive, autodidactic methodology: “If a book is promising, I read it in a bathtub full of hot water and stay there until the water is cold… as if introducing amniotic fluid to a library … revising… fetal ignorance.” Elsewhere, tears flow, as common and as necessary as precipitation, while [p]unctuation marks [are] like facial expressions,” “melancholy about action and position.” In “A Formulary for New Feeling,” a rewrite of a Situationist text, Boyer comically presents a “leaflet airdropped at Lascaux” that calls for:

Boyer’s meditations on her battle with cancer are especially poignant. In “The Season of Cartesian Weeping,” she says: “My body has reason to weep—more reason than I do—but there are times I join my tears in their crying, adding to the tears of side effect the tears of cause. Disease has bullied me into Cartesianism, but the mixed tears undo division through liquification.” She refers to such tears as “automatic,” and, therefore, transpersonal, as they “drip down cheeks, dampen books, keyboards, dinner plates, postcards, steering wheels,” illustrating how we have melded with our extrinsic technologies of communication and mobility.

Additionally, though, Boyer highlights the isolating, if not fatal, consequences of our cyborged condition: in order to “always be working,” she kept her iPhone in her bra before she found her breast tumor; “Roombas, twitter-bots, self-driving cars: all are automated ideations of everyone else’s extinction.” By now, we know that the tech-gaze is intent on flattening us screen-thin to algorithmic information, on mining our data to binarize, brand, bait, and sell it. We are attuned to the temperature of environmental peril. Still, Boyer’s shrewd articulation of our affective climate is needful and generous.

Sensitively, she asks us if these are some of the reasons why being together can be so difficult. “Erotology” probes the loneliness and the longing of our eschatological anxiety: “The day is made of alternating terror of having that person with you in some way or not having that person with you in some way, the terror of their interest or non-interest, the terror of asymmetrical or symmetrical desire.” Boyer senses that this twin terror and desire arises in a past tense that indicates the future: “Could the passing of hours, the spinning of the earth, the silence of birds, and all operation of time have a heartbreak whose course is category, too?”

But in spite of this and our cosmopolitan diseases, the necrotic cancer cells that “take over every territory they can… growing so fast that their insides die as their borders rapidly spread,” Boyer never looks away. Boyer says no to affected nihilism, with a tonic of disappointment that cares deeply for alternative meanings and hopes for embodied unions. Her handbook, through the holistic motion of its questions, prompts the active rearrangement of emotional and social furniture so that there is “enough for every home”—enough to sustain us as we face one another and search for more habitable means of being autonomous and in communion. A Handbook of Disappointed Fate interrogates the polysemic world and the role of literature alike, and, in so doing, justifies our existence in tandem with poetry’s. 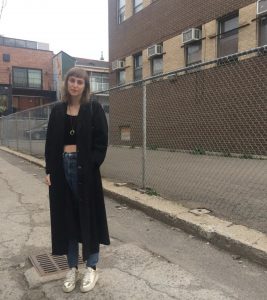 Alisha Dukelow‘s writing has been published in places like The Puritan, PRISM international, and baldhip magazine. She has a story forthcoming in carte blanche and three poems forthcoming in The Fiddlehead’s Summer 2018 issue. She is pursuing an MA in Creative Writing and English Literature at Concordia and working on her first collection of poetry and poetic cross-genre.