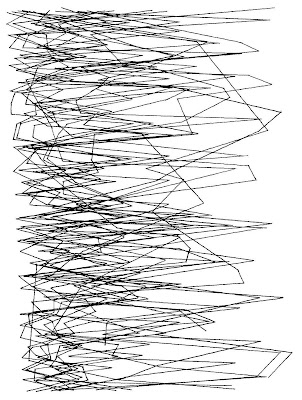 Derek Beaulieu’s Flatland: A Romance of a Crisis in Form

Beaulieu has produced an unreadable book. This raises, to my mind, two immediate questions. First, why produce a book that is unreadable? Second, what makes it unreadable? Well, the latter is the easy question: there are no words to read.

That, though, is not exactly true – this is a book overloaded with paratextual words; words that wrap around the project, defining it, but without being part of its inner chamber. The 98 pages of textual content comes complete with an afterword by Marjorie Perloff, a 165 word blurb on the back, quotes from Kenneth Goldsmith and Marc Boutin, and a 75 word description of the publisher’s series in which the book appears (Information as Material, of York, England).

No doubt, these paratextuals and the literary power of the names put forward to endorse the project are in place to remind us that we have not been swindled into buying an unreadable book with no “content,” even if it looks that way on first glance.

What do they say about Beaulieu’s Flatland? The publisher argues that Beaulieu’s book belongs to a current of art and literature that reworks previous sources rather than attempting to create something new – the world is already “full of objects.” Such projects “generate new meanings” by reusing/reducing/recycling existing material. Boutin argues that Beaulieu’s text actually exists somewhere between form and content; that he manages to recuperate ideas “embedded in writing as communication,” implying that the book exudes a kind of metadiscursive evocation of what it means to be a writing. Goldsmith argues that the book is a perfect reconciliation of mechanical writing (a la his own method of uncreative writing) and the tradition of experimental visual poetry. It is, he notes, a visual translation and creative transcription that is yet “non-illusionistic”: real without realism.

Each of these amounts to being gestures toward the beginning of a theorization of why the project is and what it does without ever addressing what or how it is. But for a project that is devoted to the physical letter as object, and in turn sublimating the physical letters into his diagrammatic representation of the position of the individual letters in E.A. Abbott’s Flatland (1884), the object and the method of creating the object ought to be recognized as intimate with the work’s ultimate significance. This is where Marjorie Perloff steps in.

Perloff’s afterword describes Beaulieu’s system and explains it through its relation to his previous work in experimental writing, including his various campaigns against lyric poetry. Perloff reminds us of Wittgenstein’s distinction between the language of information (in which poetry participates) and the language-game of giving information (from which poetry (often) escapes). Beaulieu’s book, she argues is “an exercise in sameness and difference” that shares in the Oulippean spirit of violation and revelation. She offers nods to the pataphysical tradition, to Gertrude Stein, and even to an oblique quote by Wordsworth about obliqueness in quotable lines. Beaulieu, her short essay seems to imply, is at the centre of the literary tradition rather than blurred on the far horizons of radicalism.

Beaulieu’s text itself is a series of straight lines arranged much like a seismograph shooting left to right, top to bottom. The lines represent tracers of an individual letters movement down the page of the original text, creating constellations of recorded movement. Visually, they look like the discarded gamecards of Joshua’s simulated nuclear wars in War Games. Ignoring the paratextuals for a moment, the book is, literally, a collection of lines jumbled together in an ostensibly meaningful way. The nature and function of their meaningfulness, however, is ambiguous – it’s where Perloff turns to pataphysics, Boutin to metadiscursivity, Goldsmith to uncreative writing, and Beaulieu (in a quote in Perloff’s piece) to Deleuzean rhizomatics. My instinct with a book of this nature is to stay closer to the physical object.

In fact, after the shock of a book of poems that include no letters, the next most noticeable thing is the overwhelming presence of the line. This makes perfect sense: the book he transmogrifies is a wickedly original narrative set in a world of two-dimensional space. Lines in 2D, as anybody who played the original Castle Wolfenstein knows, are the same as walls in 3D. Concrete and visual poetry has thoroughly deconstructed the icon, but here is a book that deconstructs the hegemony of the poetic line. Beaulieu explodes the mundane tyranny of striped poetry for the universal openness of constellated poetry.

This deconstructive agenda also connects to the original text, which was intended as a satire of the constraints of Victorian society. If we read Beaulieu’s text as a satire similar to Abbott’s, his critique is lodged against those practitioners (especially the supposedly experimental practitioners) who never question or challenge or allow for the serious interrogation of this aspect of the poetic apparatus.

However, Beaulieu’s radical disruption of the physical typography of poetry doesn’t strike me as exclusively satirical. Further, it reminds me, less of the early, mid, or late twentieth century poetics swamped in irony, cynicism, and other manifestations of the punk spirit, than of a contemporary to Abbott just on the other side of the English channel – Stephane Mallarmé.

With the Symbolist movement exploding one year after Flatland appeared, Mallarmé was already devoted to his idea of a pure poetry: poetry that escaped rationalism for ecstatic, experiential symbolism. The less rational the symbolic content, the more potent the purity of the symbol. From this line of thought came his extremely enigmatic and hermetic “A Throw of the Dice” – the functional initiator of contemporary visual poetry. Mallarmé’s sense of the crisis of verse (an idea that anticipates Wittgenstein’s language-game, as Kristeva has noted) created an opening for poetry with unlimited potential:

Poetry is the expression, by human language reduced to its essential rhythm, to the mysterious meaning of existence: its gift is the authenticity of our existence and it constitutes the only spiritual task. (Letter to Léo d’Orfur, 27 June 1884)

In many respects, Beaulieu’s non-illusionistic constellated lines fulfill Mallarmé’s attempt to push his own verse into an essential rhythm ruled by mystery and spiritual potential.

Beaulieu’s work participates in the tradition of visual poetry that grows from Mallarmé idealist sense of the libratory and revolutionary potential by physically breaking language open and uncovering a dormant purity. Some today might be tempted to mistakenly call this Romanticism, though it could be characterized as romantic. Indeed, Beaulieu confesses a romanticism, an idealist significance, of a similar nature in a paratextual element I have not already mentioned – on the cover even, in the subtitle. For here he himself, by including Abbott’s original subtitle, characterises the book as “a romance of many dimensions.” This romance transcends the satirical aspects of the work (as well as the swindle) by pointing a way out and through the conservatism that binds us to a flat earth and to straight lines.

Beaulieu’s unreadable book synthesizes Abbott’s satirical use of space with Mallarmé’s idealistic rupture of space. It embodies its own romance of the crisis of form.

Gregory Betts is the author of If Language and Haikube. He is the Co-Editor of PRECIPICe literary magazine and curator of the Grey Borders Reading Series. He currently lives in St. Catharines ON where he teaches Avant-Garde and Canadian literature. You can read an interview with Betts here. More on Mallarme:
Un Coup de Des (pdf)
One Toss of the Dice