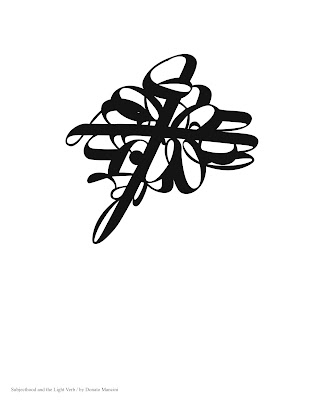 How Poems Work: “Subjecthood and the Light Verb” by Donato Mancini
by a. rawlings

It is Tuesday afternoon in August. Like the past few Tuesdays, I visit with Holden F. Levack, a recent high-school graduate keen on words. Holden flips through Donato Mancini’s second poetry collection, Æthel, selecting as our subject the fourth poem in the book, “Subjecthood and the Light Verb.” This visual poem sits opposite the cheekily titled “This Poem Is Making You Smarter.” Both poems appear to hover in white space, masses of black ink curled in loops and swoops.

As its moniker suggests, the primary emphasis in visual poetry is on a text’s graphic presence. Any printed poem has a visible quality to it, and it is often useful to consider during interpretation a poem’s physical shape and the interplay between the poem-object’s materials (most frequently black ink printed on white background). In Mancini’s Æthel, the viewer is invited to place emphasis on the visual materiality of the text.

Holden and I stare at “Subjecthood and the Light Verb,” and then catalogue the shapes suggested by black ink on white page:

Next, we close the book and list our recollections of the poem:

With this backdrop of initial observations, Holden and I open the book again to examine our specimen. We dialogue.

ANGELA: The prominent top ascender of the ‘cross’ intrigues me. The curled serif intercepts the strong black line of the ascender, creates a white space overtop of where a black line should peek through the vacant space of the serif’s loop. This section of the poem piques my eye similarly to optical illusions. I thought I was looking at one fluid, interconnected pen mark, but this overlay shatters my assumption. What physical depth is at play within this poem? Is the white space opaque? Is it not empty? How is white space on a page never empty, but actually matter itself, capable of covering text?

ANGELA: This raises a question. What part of the structure, for you, came first?

HOLDEN: My impulse tells me the cross structure.

We stare at the page.

ANGELA: My eye is constantly drawn to the upper left-hand quadrant.

HOLDEN: Neat that we can name hemispheres, quadrispheres.

ANGELA: Yes, such an act feels like identifying stanzas within a line-based poetic structure. And the four quadrants or ‘stanzas’ within this poem have a similar overall quality though their individual marks are distinct, as though they rhyme.

We stare at the upper left-hand quadrant.

ANGELA: Arguably, this quadrant holds one of the larger blobs of ink. Notice it has a small white speck in it. It appears to have, within the poem, the most density of ink with least amount of white. The rest of the text has relative width consistency. This blob also appears framed within a curlicue (centred as though an apple’s core).

HOLDEN: In another quadrant, we’d find a lot of loops, but here it feels as though it’s coagulated.

ANGELA: The blob’s shape looks like a fish; this is possibly noteworthy given the earlier mention of anchor and crucifix.

HOLDEN: Yes, looks strongly like a Jesus fish – which brings me to something else I was thinking about: bottom left-hand quadrant. It reminds me of frogs. I see two frogs.

We shift our eyes to the bottom left-hand quadrant, where Holden traces black loops to delineate frog-shapes.

HOLDEN: Perhaps this parallels the fish.

ANGELA: Interesting how, when we start to identify visual shapes within the chaos, we can’t unsee the named shapes.

Holden and I take a little time to write down our thoughts. Mine emerge a wobbly, questing paragraph:

When we read poetry, we’re often looking for familiar letter-shapes that will uncover some meaning in how they interact with one another (to form words, for example). With an alphabet-based, lined poem, the shapes we interpret come ready-made in the form of letters and we engage them second-nature, without questioning how we identify and perceive each individual mark on the page and how all of the marks visually interact with one another. In Mancini’s poem, the familiar letter-forms are stripped away, offering instead an invented script that invites the reader to seek meaning through its visual materiality. How do I “read” this poem? How do I break down its visual components into something I might “understand?” Can I identify familiar (even archetypic) shapes within the visual poem? How do I begin to assemble an understanding of those shapes through their position on the page and juxtaposition with other shapes? How might I structure a narrative out of the interaction of these shapes?

Because the title exists in the page’s footer, Holden and I choose to grapple with it last. In his acknowledgements, Mancini suggests Æthel’s index-poem “proposes a theoretical framework for visual/concrete poetry.” With the list of compiled and composed lines, Mancini hints that some lines may be cribbed from fellow authors (and his acknowledgements corroborate this theory). We search Google for the titular phrase “Subjecthood and the Light Verb” in case it is, in fact, an allusion or direct lift from another text: no results. We hunt in reference books for definitions of ‘subjecthood,’ ‘subject,’ ‘-hood,’ and ‘light verb.’

Is ‘subjecthood’ a word? What does it mean? If not, what could it mean? Unable to find a tidy definition, we set about building our own.

Wikipedia informs us that a ‘light verb’ is a verb with “little semantic content of its own…; participates in complex predication (compound verbs),” and may provide some light indication of “event-semantics, such as aspect, mood, or tense” (ie. started reading).

Equipped with these definitions, our title conjures questions for us. How does a light verb in complex predication resemble a thing before it has been overloaded with symbolism? How could the visual poem suggest a thing needing to be discussed, calling into question how we interpret something, when we are interpreting?

The poem stares at us – attempts to decipher nostril curvature, ocular circles housed in circles, wind-whipped hair. The poem fashions us into the kind of narrative that would best comfort or challenge it today. The ‘we’ in the room becomes the ‘it,’ and vice versa. Each shakes a body all around; that’s what it’s all about. 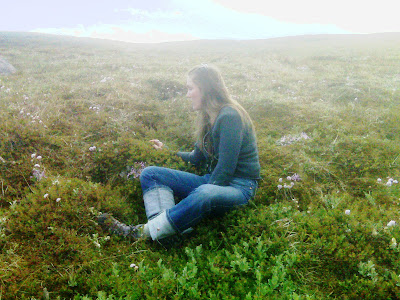