Ryan Fitzpatrick: This Poetry Seems Like a Good Racket

I am uneasy these days about my writing. I’m uneasy about the fact that language is at once a means of liberation from ideology and the mechanism that incarcerates me within it. Language forces me into a binding relationship with ideology that it would be irresponsible to deny. Poems that continue to operate solely on the surface level of discourse, dealing with the results of language, that continue to ignore the reality that we are entirely and thoroughly permeated by capitalist ideology, poems that continue to offer trite observations about the human condition or pithy political slogans tacitly reassure us that our way of delivering language is right without ever questioning what could be lurking in the background of our conversations. In a time defined by data and information, a time where the difference between the words swap and insurance can have drastic consequences, language is the direct route for ideology into our lives. We’re accustomed to ideology being obvious, state sanctioned political ads, marketing approved by lobbyists, down with The Man, but what happens when it is the medium as much as the message that is the delivery system?

I’m not advocating that writers should ostrich themselves into an avant-garde position that is no longer tenable, since the avant-garde gets cast as the bad boy in our hegemonic skit that makes every other person feel more securely (or insecurely) normal. We can no longer pretend that our very use of language to produce meaning or provide understanding is somehow worthwhile if we are being clever. Nor am I advocating that poets give up, or explode something to be radical. I think writers have settled into demonstrating the implacability of our position and often what gets touted as radical is merely symptomatic.

Faint glimmers are appearing in poetry books everywhere that suggest poets are moving beyond playing out a shocked stasis at our immersion in a capitalist culture cut off from the only means we thought we had for subversion: writing. Writers are beginning to move from contributing to the persistence of capitalist culture either as supportive force (lyric) or antagonistic force (avant-garde) and are directly criticizing the individuating forces that cause us to fragment, specialize and play the business game in the hopes we don’t disappear behind the next shiny façade like some second rate commercial. Without settling into either category, writers are beginning to effortlessly switch between avant-garde writing and lyric writing without the hand-wringing that usually accompanies such a movement.

I’m mainly interested by poetry that understands our complicated role as writers at a time when no matter what we are trying to say, we are always demonstrating our culpability with a system that benefits from its enmeshment with language and a lack of investigation of the same. Consider the following poem, taken from Ryan Fitzpatrick’s book Fake Math (Snare 2007).

First off, my poem forgot how
peanut butter and jam tastes.
In kindergarten, a strong coffee
soap opera, my poem caught a fish.

Like a spoilt child, my budgie died.
Got kid deep in this dimlyness. Fog
of cadence a frog prince seems to like.
Shoot up the sky, a chirpy lullaby.

From true fireworks, rue voice soon burst.
Spare thee quarters when Klein takes
jobs in the junk. A jelly scansion drops
to the floor, a sack of strong coffee.

Fitzpatrick’s poem takes a shape that people with no interest in poetry can recognize; quatrains are a kind of nostalgic form but the words in his poem don’t follow the promise of familiarity that his form makes. He immediately introduces a tension between familiarity and difference, a tension that nostalgia has the power to ameliorate. Rather than let that tension between familiarity and difference disperse, he continues to wander back and forth across the nostalgic line. The form is reassuringly obvious, but the combination of words is frustrating, obscure and perplexing at first glance. Let’s take another look.

In the opening stanza of his poem, Fitzpatrick suggests something has been forgotten, that poems should be about sensual things, but a reader has to be wary in a poem with such an audacious title. For some people, peanut butter and jam are nostalgic triggers, and followed closely by kindergarten, strong coffee and soap operas, the metonymic chain adds up to a giant nostalgic hook. When Fitzpatrick writes that his poem caught a fish, we catch a glimpse of what he is doing with the highly nostalgic metonymy of the first stanza: poetry like his, poetry like the poems in the rest of his book, have forgotten to be nostalgic. More accurately, Fitzpatrick implies that poetry which falls into the category of being “a good racket” depends heavily on nostalgia, on acquainting us with our childhood selves, on authenticating those comfortable memories of peanut butter and jam, of the smell of strong coffee.

When Fitzpatrick writes that “[his] poem caught a fish” he refers to the nostalgic hook that writers use to capture an audience’s attention, to make us suspend our disbelief, make us stop looking at the medium and start paying attention to the message. Although Fitzpatrick employs the trick of nostalgia to invite his readers to relax into his poem, he eases us in with promises of peanut butter and jam, kindergarten, soap operas, he also pushes us out “like a spoilt child.” Sticking with the nostalgia leaves us “kid deep in this dimlyness” waiting for a frog prince to come along and tie everything up into a happy ending. Fitzpatrick frustrates and then provokes us to make sure we are awake (smelling the strong coffee) and paying attention to the devices that trick us into not paying attention while we are off imagining, transforming squiggles on a page into the first few years of our lives.

The successful catch in Fitzpatrick’s poem has a double hook: on the one barb he points to the fact that poems are often constructed with a hook, while on the other he attempts to pull us up out of our reverie to realize our predicament. The effect of this is to move beyond pointing at our immobility in the face of language (as writers and readers) and to provocatively tease the structures that would have us reify their solidity. Fitzpatrick isn’t saying nostalgia is bad – down with nostalgia and lyric poetry! – but he is advocating an awareness of what your art is trying to do to you akin to knowing whether or not the cold, crisp plums in your icebox are locally grown.

In the rest of the poem, Fitzpatrick works through the device of nostalgia and the potential for a political poetry that doesn’t depend on its intractable position as alternative or weird or one that offers pithy slogans in an attempt to sound involved in a larger debate. He works hard to create a thoughtful response to our predicament as people dependent on language in an age defined by data. What we get in his book are poetic equations that purposefully and frustratingly don’t add up even though they have the regular structure (stanzas, quatrains), typical content (childhood, pop culture), and sonic properties (internal rhyme) that suggest they should amount to a whole and proper poem. Scansion “drops to the floor” in the face of trying to adequately place his poem into a pre-defined category. Fitzpatrick combines the best of the lyric tradition with the compositional experimentation that has recently found its way into creative writing workshops everywhere to do something more than point awkwardly back at language and shrug. The last line of the poem reminds us that we can’t loll forever in a glib politic, that we can’t rest on weird laurels or pat ourselves on the back for being transgressive because the self-affirmed lyric poets don’t get it. Fitzpatrick reminds us that we might be nostalgic for the smell of strong coffee, but that coffee has a history. Someone filled the sack that provides for our tidy reminiscence. 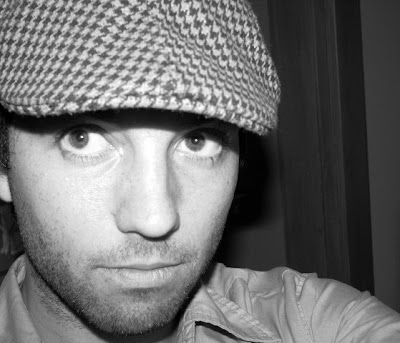 Bio: Jason Christie is the author of Canada Post (Snare 2006) and i ROBOT (EDGE/Tesseract 2006). He is a coeditor of the Shift and Switch: New Canadian Poetry (Mercury 2005) anthology. Lately he has been writing about a forest. Some of these poems are featured online as a digital version of a chapbook by the exceptional people that run the Olive Reading Series in Edmonton, Alberta, Canada. The chapbook is called Like Wolves and can be found here. A previous post on Christie’s iRobot can be found here.