NO ONE CARES MUCH WHAT HAPPENS TO YOU

when Serbs get mad, they talk
about a small town like Grace

Stop laughing; I’m serious
Grace is all I can afford on my nursing home wages

I pity her for the thankless job of building
A nation of Americans conceived in petri dishes.

Whores are disposable.
They get strangled, beaten, tortured, raped …

in old motels, diners, train stations, or whatever,
and I think about Capri Sun bags when it happens.

Look, poetry, painting, writing …
People don’t get it like they should.

Because when it comes to that word, “nigger,”
– I know that this is illegal –

it’s like the emergence of yet another guilty, white Southern male
as the fat lady continues to sing

as long as we are laughing
at Rush Limbaugh’s addiction

remember that Mt. Rushmore was itself
the creation of an ardent member of the Ku Klux Klan

from The Anger Scale

I’d like to begin by going back to something Jason Christie said in his post: writers are “beginning to effortlessly switch between avant-garde writing and lyric writing without the hand-wringing that usually accompanies such a movement.” While Jason writes specifically about my writing in his post, this is something that has been on my mind as well. How might a writer bring the tools of the lyric to bear on an experimental or radical writing? Most of the writing that inspires and engages me combines these impulses, especially in texts that create provocative spaces that are both post-humanist and post-avant; in other words, I am interested in poetic spaces where the writing suggests possible syntactic utopias without ignoring the social particulars of contemporary life.

One of the recent contemporary strains of poetry that strikes me in this way is Flarf. Despite its seeming randomness and reputation as deliberately stupid, Flarf represents a poetic deeply invested in affect. At its best, the work associated with Flarf produces complex matrices of voices (human or not) enveloped not in socially and syntactically accepted structures of meaning (though often flirting with social logics of different types) but in shifting and exaggerated versions of those structures evoking the more something than something that Baudrillard proposes in Fatal Strategies:

Flarf is more social than social and I am attracted to Flarf for that reason. It interests me when Flarf (and other types of writing) finds places where the extreme introversion of the paranoiac meets the extroversion of the activist. In other words, one of the concerns of Flarf is the intersections between public and private languages, between the social mass and its anti-social impulses, and between the over-personalized truths of a lyrical humanist poetic tradition and the anti-humanist impulses of the avant-garde. The one project that I find particularly striking in Flarf writing because of these issues is Katie Degentesh’s exemplary book, The Anger Scale, where Degentesh examines public definitions of normalcy as set against the individual language used to describe, interact, justify, and cope with those definitions.

The interplay between public and private in Degentesh’s poem is important. When, at the end of the poem, we are asked to “remember that Mt. Rushmore was itself / the creation of an ardent member of the Ku Klux Klan,” we are also implicitly asked to consider the implications of the intersection of the extreme patriotism of Mt. Rushmore and the virulent racism of the Klan. In 2008, this detail is striking. As I watch the current American election and the thought of an African-American president very quickly becomes possibility, I see a mass coalescing, retroactively evoked in these final lines of Degentesh’s poem in an individual, that acts as a kind of hive mind. The mass of individuals recently gathering at McCain/Palin rallies – or at least the representations of those groups on services like YouTube or in stories later related on more traditional media – act out of a communal self-interest – a spirit of “let’s call the other guy an A-rab Terrorist, so he doesn’t make us communists.” This is a mass invested in harm and that owes a debt to a series of wheezing and failing ideas.

Coming out of this idea of self-interest is another pair of contrasting ideas that dominate Degentesh’s text: care and harm. “Care” is fronted immediately in the title as an important concern, but it is framed in a negative way and the poem follows this thread, being about not caring or actively harming or the reciprocal fear that comes with either of these. Immediately, Degentesh opens her poem with this fear when an early voice in the poem mentions that “when Serbs get mad, they talk / about a small town like Grace” and the fear of harm is obvious. What might these “Serbs” do? Degentesh’s use of “serb” as a mark of foreignness could be compared to a conflation of “muslim” and “arab,” but might more usefully be compared to the current conflation of “Obama” and “Osama.” “Serb” is a negative word not because of any real political or cultural meanings, but because it sounds foreign. In contrast, the name of the town they talk about in anger is a word filled with positive connotations.

From here, the poem moves through a series of references to disposability: “Whores are disposable,” Americans are “conceived in petri dishes,” abused women make the speaker think of “Capri Sun bags.” Even the opening lines, delivered with such seriousness, are immediately undercut by the thought that someone off screen is laughing at them. Through much of the poem, Degentesh successfully evokes a culture of disposability, a culture of indifference, and a culture of not caring. It’s striking then, when later in the poem, Degentesh notes that “no matter how public it all seems / there’s a forced casualness to this conversation,” which suggests that even in public discourse there is a culture of indifference and even in a situation where we might deeply care about an issue, we might find ourselves forcing an air of “not caring.” Strangely, care here is attached to self-interest and a desire to “make them as white as possible.” Normalcy and deviance make up an important thread of ideas across Degentesh’s book, so the evocation of the deviant (whores, non-whites, culturally unsanctioned “poetry, painting, writing,” etc) as disposable suggests to me that a casual-minded public face of caring for these deviant groups may be symptomatic of a greater desire to ignore or, worse, harm those whose deviate from a normative position.

Working in a poetic that is both multi-valent and articulately human, Degentesh creates a space that casually articulates an anger toward the casualness we use to describe the politically grave – a space that, to paraphrase Baudrillard once more, is more casual than casual. Degentesh avoids the blunt obviousness of much political poetry in favour of work that focuses on the strange and idiosyncratic human impulses that grow out of larger political structures. Degentesh’s work is as portrait of North American society as a mass that is focused not on our human faces, but on how we react to the debts we owe to the spectral forces that haunt and possess us. It is a portrait of impressions and acts, of investments and debts, of blank eyes and irrationality. 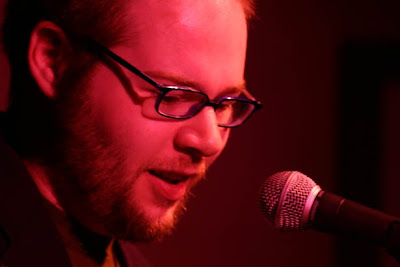 ryan fitzpatrick lives and writes in Calgary. He is a former editor of filling Station magazine and is co-curator of the Flywheel Reading Series. His first book, FAKE MATH, was released by Snare Books in the fall of 2007.