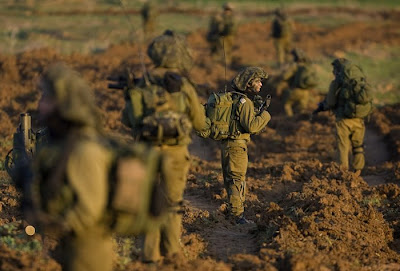 The photograph above is currently on the front page of the online edition of the Globe and Mail accompanied by an article that describes a formidable ground attack on Gaza that is designed to once and for all rout out Hamas and put an end to the constant launching of rockets into Israel. Hamas on the other hand threatens to make Gaza a graveyard for Israeli soldiers. And how long are we into the war in Iraq now with no end in sight and surely no winners? I won’t dare to get into the political mire of it all except to acknowledge, as we all know, that something is deeply wrong here.

And what are we to make of these images in the media? Do we even notice them anymore? Yesterday the photograph on the front of the Globe’s online edition featured what looked to be a soldier joyfully opening fire. He was vibrating with something, full smile, gun up and aimed. It is simplistic of course, to say, “still against the war,” but millions are, and all around the world they are demonstrating. Surprisingly, since it seems unpatriotic to even comment on such things. We are supposed to, by now, understand that this is to be a constant feature of our democratic lives.

This photograph above makes me think of the endless parade of young boys in a sandbox launching mud attacks, hovering as one does with a small plastic soldier, slightly above the ground, muscling through, elbows in the dirt, toward the trench and the facing boy/soldier. Or, are we indoors, in a basement, with the dried moss that last month hung from the roof of all those mini creches, now doubling as desert cover…

I have been back at the letters of Virginia Woolf these past weeks. Here we are on Saturday, October 1st, 1938 from a letter to Vanessa Bell:

He said the war would last our life time; also we should very likely be beaten…everyone said Probably we shall win but it’ll be just as bad if we do….I sat in the basement (at the London Library) with the Times open of the year 1910. An old man was dusting. He went away; then came back and said very kindly, “Theyre telling us to put on our gas mask, Madam.” I thought the raid had begun…then he asked if he could dust under my chair; and said they had laid in a supply of sand bags, but if bomb dropped there wouldnt be many books left…

and here again to Bell from October 8th:

Kettle yourself; pot yourself; or whatever the phrase is. Trenches were dug because if you lie at the bottom of a sloping hole, a shell will burst at either side and miss you. Two workmen were buried alive making them. As for gas mask, many have died through testing them on the exhaust pipes of cars. Govt;has now issued an edict that theyre not to be tried on gas pipes of cars as they dont work… Ours lie on the drawing room table….

Again, who believes war can be abolished anymore? In her book Regarding the Pain of Others Susan Sontag admits that even the pacifists can’t muster much of an argument in the face of it. And in that book Sontag goes back to 1938 when Woolf, as well as confronting the inevitability of war on British soil, was also confronting the backlash from having published Three Guineas, her most directly political book, a feminist, pacifist plea. She was not the only one as Sontag points out:

Even Freud and Einstein were drawn into the debate with a public exchange of letters in 1932 titled “Why War?” Woolf’s Three Guineas, appearing toward the close of nearly two decades of plangent denunciations of war, offered the originality (which made this the least well received of all her books) of focusing on what was regarded as too obvious or inapposite to be mentioned, much less brooded over: that war is a man’s game — that the killing machine has a gender, and it is male. Nevertheless, the temerity of Woolf’s version of “Why War?” does not make her revulsion against war any less conventional in its rhetoric, in its summations, rich in repeated phrases. And photographs of the victims of war are themselves a species of rhetoric. They reiterate. They simplify. They agitate. They create the illusion of consensus.

She might not have accomplished that much with Three Guineas, but she did make her opinion known, and in taking the risk of speaking she made herself a target. What to do in the face of it? How many marches? How many demonstrations? And what of it does any good at all? At least it bursts a little of that illusion of consensus. Clearly business as usual isn’t working.