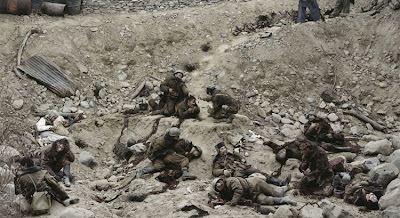 Dead Troops Talk (a vision after an ambush of a Red Army patrol, near Moqor, Afghanistan, winter 1986) 1992

The above image, courtesy of the Tate, is one of Wall’s “history” or “epic” photographs. Like others of this period, it is as meticulously crafted as a hyper realist painting and just as false. Wall spends months creating these diorama-like settings, hires professionals to do makeup, recreates in other words, an entire world. It reminds me of the film version of Atonement, recommended for the war scenes alone which are surreal and disturbingly beautiful. Why, I wondered when I first saw this image, is Wall turning to Afghanistan? (And read the dates folks, the image is from 1992 and the battle from 1986.) But why not? War is part of the fabric of our lives. Whether we acknowledge it or not, war is as much a part of our daily Canadian life as gardening and ice hockey. Both times I drove to Toronto last month along the “highway of heroes” traffic slowed from Belleville to Scarborough as the overpasses, lined with fire, police, and military men and women, stood silent with Canadian flags waiting for Canadian soldiers coming home in boxes from Afghanistan. We are all very much invested in these wars.

Meanwhile, generations elsewhere are growing up in the middle of wars, knowing nothing of the west but battles and masses of photographers and reporters filming and photographing these incursions. Making war, photographing war, commenting on war, discussing war, protesting war, making more and more war. Where in the world would notions of peace come from? Can anyone in the middle east believe in peace? What would their model be?

Sontag also writes about the above photograph, which she singles out as exemplary among contemporary war photographs for its “thoughtfulness, coherence, and passion.” It is, she argues, “the antithesis of a document…a Cibachrome transparency seven and a half feet high and more than thirteen feet wide…mounted on a light box.” The photograph makes me think of one of the photographs Woolf was reacting to in Three Guineas, the photographs that landed on her breakfast table arguing for war, providing proof of war, attempting to elicit various responses–outrage, support? As was the photograph in yesterday’s post which seemed to resemble a War Game, a virtual experience of war promising new generations of North American boys a future that might include the handling of such guns. Someone, somewhere no doubt authorized that image. War photography is groomed. Normally. I won’t get into the horrifying photographs of naked prisoners of war…

“We can’t imagine how dreadful, how terrifying war is…and how normal it becomes…” Sontag concludes. And that is precisely it: war has become normalized. Yet, one remembers that it was the images of Vietnam that helped put an end to that. What images now? What images would it take to stir? How deeply must the images penetrate to rouse any hope for anything but more of the same?

I once taught a research writing class titled “War & Ethics,” which understandably, attracted a 90% male student body. It was just prior to 9/11 and war seemed very far away indeed. Not one person in the class could imagine peace. No one argued for pacifism (fanaticism?). In a military-focused nation what would the point of that be? And many of the students had intense knowledge of particular battles, historical moments, and of course, US Military history. It was a fascinating semester, and while none of the students could imagine peace, they were very passionate about the parameters of war, the morality of the just war. In fact I have rarely seen students want to work so hard to make their cases. It might be a fabric of their young lives, but if it was, it was a fabric that needed to be accounted for.

Perhaps that is one difference that one feels as a Canadian: it is not our past is it? We are not a militaristic nation are we? I always thought we were peacekeepers, sweepers, tenders, the fair witness. I’m not sure any of us can hide behind that idea any more.