from Lisa Robertson, Debbie: An Epic

from The Descent: A Light Comedy in 3 Parts

As in the parti-gendered streets amid

opacity the morning and how

remarkably as the grey woods pull their

fold cupidity as the sobbing in structural dull 200

to laughter from the vision of structural

decrepitude so very dear to my

heart which vanishes so rapturously

as the yellow rustle plucking the boughs

through dark rote through diversities of greed dull 205

and sleep and flight insuperable depth

pendant in this in water’s green silence

as orchards explain orchards or those un

nameables made ash in the slurred twofold

heat shall as catapults of lust as dull dull dull 210

press of the heart’s grand distance and the

indispensable ornament which is

from perpetual braids of flesh to long

the soul named “not my dark hour!” – blurred

smoke on lurid water: all these burn

am the sophist who suddenly…” dulldull dull 220

it was then that the ruddy earth ex

Lisa Robertson’s work engages subjectivities in ways serious and playful, jauntily new yet old and familiar. At times she inhabits ancient styles and dictions, which then spring up, fold back on themselves, grin. In her book-length Debbie: An Epic, feminism twangs Virgil’s harp – with the disjuncts of Language poetry.

This work beckons not just to the ancients but to the English 17th and 18th centuries, before romanticism hijacked verse. Like those venerable Augustans Dryden and Pope, she uses elevated tones and barbed words, has characters stand not for the individual but as criticism of the age, and never forgets wit and pleasure.

Debbie has some fine Augustan echoes: rolling decasyllabic lines (though with impish breaks that propel semantic leaps, as in the first few lines!); dips into nature and urban courts; aphoristic phrasings… like “the/ indispensable ornament which is/ tenderness.”

Dryden and Pope found man to be not so exalted as did the epics, and thus addressed situations more plebian. Debbie, too, does this, confecting the life of a fin-de-siècle woman (man here is “father,” no hero). In the section above, Debbie’s (or the narrator’s) woodsy walk mimics Dante’s descent and comedy (but “light” not “divine”), then goes “sobbing in/ to laughter.” Though she claims language itself calls things into being: “all these burn/ in language so directly,” she shuts the sophist up (that rhyming boy) so we hear the reddened earth speak… by “ex/ haling so beautifully mimesis.” Ah, life imitating art (again)!

“Learn hence for ancient rules a just esteem,” wrote Pope and Robertson heard. Also she heard Quintilian, ancient rhetor: “most rules are liable to be altered by the nature of the case….” When the case is being a woman, Debbie rises up. 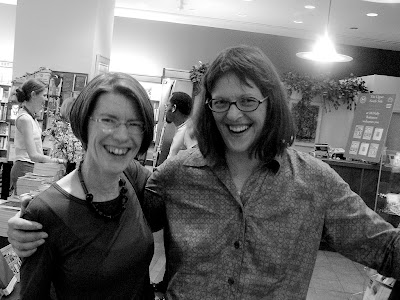 Erín Moure’s most recent book of poetry is O Cadoiro (Anansi, 2007)… her translation of Chus Pato’s m-Talá will appear from Shearsman (UK) and BuschekBooks (Can) in April of this year, and in the fall two books, essays from NeWest, My Beloved Wager, and a collaborative book of authorial impossibilities written with Oana Avasilichioaei, Expeditions of a Chimæra (BookThug). She’s been a fan of Lisa Robertson’s work since forever.

This is the first of five pieces to be reprinted here. They originally appeared in the Globe and Mail in 2000. Photo of Lisa and Erin from the McNally Robinson launch of Open Field, 2005.