put your finger on the page

or reread for nothing tie a knot

put your finger in to keep humanity quiet

at the brow and better penetrate secrets

next time put your finger there for me

in the place of the future if possible

Montreal’s Nicole Brossard has been one of Québec’s most important poets for over a quarter century; her work on forms, syntax, gender, sound, words and feminism’s possibilities in the French language has shaped even our English-language poetry in new, provocative ways.

How to bring the marvels of her language, the resonances, halts, sonorities even in the disturbances she creates, into English? It’s not obvious! For the disturbances themselves are part of the meaning; they work to halt and double-back our reading of the lines, sometimes producing open-ended or ambiguous effects: but these too are part of the way we humans determine meaning – leaving it open, ready to catch new shifts and lights. (For don’t fixed meanings lead to… wars? I, for one, don’t believe we live, or live well, with fixed meanings!)

Brossard’s Installations came out 11 years ago in French, and this year (2000) in English. It’s still fresh, a suite of taut, gentle, muscled, sculptural poems. Brossard gives the reader such pleasures with her torquing of what language normally “supposes.” She doesn’t use conventional narrative progress, but uses narrative bits to create a multi-dimensional space. As a whole, the poems install the amazement of being alive, and speaking, and living among others, particularly women, in a difficult end-of-century.

This small poem presents a finger’s gesture touching a book, as if touch is also a way of reading. The act of marking your place is one that usually means looking up, interrupted. So the poem, and the poet, interrupt us as readers. There’s an echo too of tying a string around your finger to remember some thing (which evokes the mother, for wasn’t it mothers who first advised this measure?), and an echo of tasting, illicitly perhaps. Here, the book’s surface is a “brow” that holds secrets, penetrable ones. There’s an undeniable sexual aura to all this but it’s the brow that’s sexual, as if brains are sexy! And the poet asks us to put our finger “there” in the book for her – for the future, as if touch and/or reading can let us endure in time, assure us of a place in the future, even if it’s tentative.
_______ 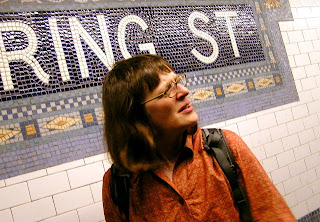 Erín Moure’s most recent book of poetry is O Cadoiro (Anansi, 2007)… her translation of Chus Pato’s m-Talá will appear from Shearsman (UK) and BuschekBooks (Can) in April of this year, and in the fall two books, essays from NeWest, My Beloved Wager, and a collaborative book of authorial impossibilities written with Oana Avasilichioaei, Expeditions of a Chimæra (BookThug). This is the last of five pieces to be reprinted here. They originally appeared in the Globe and Mail in 2000.