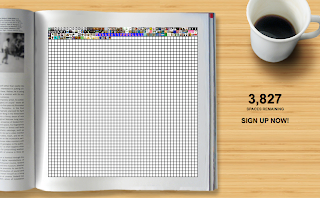 LH: Tell me about the idea for this project, Jeff. How did it come about?

JT: The Artforum Ad Project started in 2007, inspired by the Million Dollar Homepage and similar projects. The idea was to create both a singular artwork (a random conglomeration of lots of tiny pieces) and a way for lots of people to show their work in an an otherwise closed forum.

LH: How many images do you have? How long do you think it will take you get enough artists involved? Or is it the process that interests you?

JT: The number of images is constantly changing. It seems people sign up in spurts so it’s hard to judge how long it will take. The piece will live until it’s finished, a way of working that I ordinarily wouldn’t be able to handle. In this case, however, I’m fine with the piece taking its time.

LH: It’s been a while since I actually saw any of your work. Are you still working with text, or engaging with poetics?

JT: I’m writing quite a bit, but lately it’s been much more grant applications and proposals than creative writing. My work has nearly split between what is traditionally art production (the making of images, sounds, objects, etc.) and what could be broadly considered critical work: curatorial projects that often involve writing catalog essays and organizing panel discussions on critical issues surrounding my work.

The broader idea of poetics is very much present in the work. In the past year, my production has turned to data as a source material and medium. I am very interested in how data can be seen as a poetic text to be read, analyzed, and manipulated. A whole new body of “texts” is then opened up to be critically examined. Similar to the rigid structure of the sonnet, data sets have their own particular formal structure.

Jeff Thompson received his BFA from the Minneapolis College of Art and Design and his MFA from Rutgers University. He is currently Assistant Professor of New Genres and Digital Arts at the University of Nebraska, Lincoln.

Thompson has exhibited and performed his work internationally, most recently at SITE Santa Fe, Jersey City Museum, Weisman Art Museum, Hunter College, White Box Gallery, and Museo Arte Contemporaneo in Argentina. Thompson was awarded the Van Lier Fellowship from Harvestworks in 2008 and a commission from Dispatx, an alternative curatorial platform based in Spain and NYC, in 2007. In addition to his studio work, Thompson co-founded the Texas Firehouse, an alternative gallery space in New York City from 2007-2009 and is currently a co-founder of Drift Station Gallery and Performance Space in Lincoln, Nebraska, USA.