A few months ago, a friend’s father challenged me to defend poetry as a product in the marketplace — the demand left me sputtering about art, the relative insignificance of commercial value, blah blah blah. It was weak. A snappier sound bite, which came to me later (oh the wit of the staircase), would have been to argue that poets are selling an experience built in language. It’s a bit cute, but it does relate to what I want to say about Suzanne Buffam’s second collection, The Irrationalist. A poem isn’t merely a delivery system for something behind the poem. I find that people who get nervous about not understanding poetry were often taught to approach each poem as if the poem is a message stuck inside a bottle they must figure out how to break open. The thrill of poetry for me (to awkwardly extend this metaphor by flipping its script) is that it wakes me up to the fact that I spend most of my time trapped inside the bottle of my own thinking. Good poetry cracks this glass and releases me into unfamiliar waters.

In fact, what I loved about The Irrationalist, is that the more I read these poems, the more pleasurably at sea I felt. Standing in front of a painting can produce the same effect — when I’m moved by any work of art, I don’t believe it’s by the specific concepts the artist might be presenting within the work; I’m moved by the moment of reception itself. In Owen Barfield’s Poetic Diction, I found a passage in which he speaks of this experience far more elegantly. Outlining the term “aesthetic imagination,” he writes, “I find myself obliged to define it as a ‘felt change of consciousness,’ where ‘consciousness’ embraces all my awareness of my surroundings at any given moment, and ‘surroundings’ includes my own feelings.”

I love how careful Barfield is with his terms. This reminded me of what I admire in Buffam’s deft poems. There are many interesting ideas at work here — the speaker in the poems struggles to reconcile ambition with a reluctance to submit the interior life to an external system of measurement; there are meditations on the gap between observation and knowledge; there are layers of new worlds, ideal worlds, landscapes within landscapes — and yet what is most satisfying for me as a reader is that each of these poems quietly shatters the glass of my ordinary consciousness. Her tactics include speculation (“To be ahead of one’s time may be the same as being very far behind it”), proclamation (“Man stands in his own shadow and wonders why it is dark”), and instruction (“Don’t believe the stories about life outside your town”). Buffam chooses to document the pursuit of meaning rather than broadcast the big lyric epiphany. I’ve grown increasingly suspicious of poems that feel like they follow a traditional arc toward a forced finale and find myself dissatisfied with the accomplished lyric poet’s usual bag of tricks. I’m more interested in watching a rabbit jump back into the magician’s hat. Buffam achieves this sleight of hand with associative leaps that are surefooted and striking and her lines often repeat a subtle rhythmic pattern that propels the ideas toward elliptical resolution, as in “Infinitive Interior,” which closes with,

The poems unfold out of their own logic, at once accessible and elusive. They change the way I think. They make me feel high.

While Buffam spins out and sustains a lucid dream state from piece to piece — a crow carries a seed of knowledge, a black dog runs unseen through the night, kids kick dirt into the face of a burning bush — this is no psychedelic clown show that disorients the reader for the sake of being strange; like Barfield, she is deliberate and grounded even as she follows the mind’s mysterious flow of images and attachments where it wants to go. In the long poem “Trying,” which is, on the surface, “about” (forgive the scare quotes, I think they’re useful here), among other things, the process of trying to get pregnant, she summarizes Aristotle’s distinction between the rational and irrational elements of the soul, and his claim that it is virtuous to strive for a balance between them. In a sly and miniature manifesto, she concludes, “In his Poetics, however, Aristotle points out that it is exclusively the irrational upon which the wonderful depends for its chief effects.”

The wonderful is on full display throughout The Irrationalist. The language is fresh, precise, and natural; the form and structure, both micro and macro, support the voice without overshadowing it. Throughout the book, Buffam references some of the best minds of the Western tradition: Paul Eluard, Nicolaus Copernicus, William James, Henry Beecher, Luis Bunel, Galileo, Ad Reinhardt, Robert Rauschenberg, Wallace Stevens, Leonardo Da Vinci, Flaubert, Schopenhauer, Jean Cocteau (plus a passing invocation of Tom Cruise). This may sound like namedropping, but Buffam introduces their ideas only to expand on them from a particular point of view. Again and again this underlines the fact that though each of us lives in an echo chamber, one can only connect to the precepts of others through the framework of her own perspective.

And though these poems find their beauty and strength in their alignment with the irrational, Buffam resists the temptation to simply disappear into a house of mirrors. “Don’t tell me there’s another, / Better place. Don’t tell me // There’s a sea / Above our dreaming sea,” she writes in the poem “Ruined Interior.” These are poems that keep reaching for new imaginative possibilities and yet they are equally concerned with constant reorientation, with a determination to avoid the dangerous cul-de-sac of self-delusion.

In “The New Experience,” she wryly states that “Experience taught me / That nothing worth doing is worth doing / For the sake of the experience alone.” To that I would add that the poem worth reading is not worth reading only for the message it might carry in its lines. After thousands of years of intellectual inquiry, the basic questions remain unanswered. Buffam reveals by example that to look outward — to the philosophers, scientists, and artists that have come before — will always lead you back to yourself.

Which leads me back to the way these poems make me feel as if my awareness of my own surroundings — including my own mind — is enlarged when I read them. I like what Buffam says in these poems, but more than that, I get off on how they operate on my consciousness. All over the world, chemists strive to perfect pharmaceutical formulas so that they can pack into a pill the kind of clear, elevated sensation that Buffam produces with words on paper. 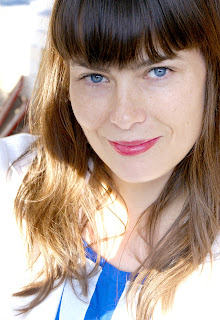 Damian Rogers was born and raised in suburban Detroit, Michigan. She has published poems in various places, like Brick, Salt Hill, The Walrus, Maisonneuve, Matrix, and MoonLit. She is the author of Paper Radio, which was nominated for the Pat Lowther Memorial Award and the ReLit Award. Rogers moved to Canada in 2003.