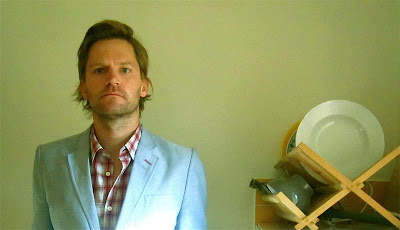 from a public dialogue at Open Space, Victoria, 26 October 2010

NARDONE: Crabwise to the Hounds was a very particular book in that when it came out in the fall of 2008, it seemed to have an immediate impact. There was this unique voice throughout and a particular sense of poem-construction that felt at once familiar and entirely new. Can you speak on the composition of the Crabwise poems: how were these poems built, how much of these poems comes in a sense of reception–of receiving words, phrases, or cadences–or are you grinding words away, attempting to construct a particular sense into the text over time?

DODDS: The poems in Crabwise took seven years to get tidied up to the point where I felt like I could put them into the manuscript. To be quite honest, about this composition question, it really changed per poem. I was really interested in sabotaging any kind of harmonious habit that I was developing with each poem. So, to me, each poem comes to the table with something new. I think a lot of people do this with their first books. You’re experimenting; you’re learning how to write.

NARDONE: Thinking about music, I am curious about your relationship between sound and sense. There is a very particular style of logic employed, or implied, throughout these poems, and often the sense that comes is a kind of lyric sense, one driven by the poem’s music.

DODDS: I’ve been thinking about this while I’ve been working on new work. I would really like to keep my feet firmly in the lyric, and my head more into the music, and into experimentation. As far as sense goes, I have this mantra where I’d like my mom to be able to read every one of those poems, and say, okay, I know this, I know this. And she’s not a huge poetry fan. So, I’d like to somewhat easily be read by people, and perhaps music can push such realisations when metaphors etc. fail. So, I don’t like to rely too heavily on more verbal, linear ideas of “sense,” as I realize that music can easily take over and do the job of stringing the reader along or out to dry.

NARDONE: So moving from there to Glenn Gould–who came up a couple of times tonight in your reading–is fugue structure something that you think about? There seems, to me, a certain sense of point and counterpoint that’s happening throughout these poems. It’s happening in lines, in line breaks, word to word, this kind of clashing sound sense where each word seems to challenge the meaning and sound of a previous word or phrase. Is this something that comes into your sense of composition?

DODDS: When I was working on those, I wasn’t really too worried about that the fugue structure. That was coming through when I was slowing the music down to a certain extent. I started to notice things that were happening that Gould was touching on, and so then I was trying to match a bit of that.

In “Glenn Gould Negotiates the Danube in the Company of a Raven,” whenever I slow down and start a new section with “that night…” I was trying to capture the sense of the piece on a larger scale. Somebody was asking me, “if I take this poem and listen to the music, is it going to match up?” Well, maybe. But, no, it definitely won’t. It got totally sidelined, through the editing process, and I think any of the fugue structure got ripped out of it. I like that you’re finding it in there, but it wasn’t all that conscious on my part.

NARDONE: Are you working on one poem at a time? Are you writing several poems at the same time? Knowing your background as a research archaeologist, I somehow have this impression of you keeping a kind of field log book where words, phrases, sentences accrue, and then, later, you piecemeal poems together in a kind of accretional style. Is this a reality, or something I am implying into your work?

DODDS: I think that’s one hundred per cent right. The poems sit for a long time. Typically, a poem would sit around for maybe three years or so. The “Canada” poem that I read at the beginning, which is new has been around for two-and-a-half years. But I’ve been inserting new adjectives every one and a while.

The problem with this sort of style, this taking things from notebooks, is that these sentences may find their way into my poems, but I cannibalize poems constantly, so lines get moved around quite a bit. They become decontextualised for me, even though the reader may think that the line is where it always has been. So I find it hard to answer questions like, “what inspired this poem” because the answer is bound to be “the poem inspired the poem.”

Tonight, reading and seeing everybody, and as those lines roll out of my mouth, I’m picturing where I was when I wrote each one. So, I’m going through this sort of autobiographical moment up here, which makes it fun for me as well.

NARDONE: It’s interesting for me to think about the autobiographical aspect to your work. We were talking briefly earlier about someone who had reviewed Crabwise and had pinpointed a specific poem where you seemed to at last get autobiographical–in quite a conventional sense of the word–and this struck me as a bit ridiculous. I read the work as being quite autobiographical. There is an implied sense of self that is impressed upon these poems throughout the book. It is, though, not immediate to the surface. You have hidden that which is directly confessional–if you even want to call it that.

And my next thought is: if you are taking these poems and building them over a long period of time, sabotaging them however you can to rupture whatever continuous method of composition, then what happens in between poems, or what happens to you between writing each poem?

DODDS: I write other poems. But a definite split occurs when I re-order them, for instance, in Crabwise, because they’ve been re-ordered, they’re not chronological any longer.

But this translation project that I am doing with The Poetic Edda came about in order to fill some of those gaps between writing poems. With translation I don’t have to make up any plots or anything. It’s all done.

NARDONE: I was excited to see that you were translating the Edda. It’s an Old Norse text that was compiled–

DODDS: It was written down around 1270. But much of it comes from a group of oral poems that had been circulating for centuries before that. So, I feel like I can do whatever I want with them. It’s a dead language, even. But regardless of this sense of freedom I’m trying to stick close to the originals, for the most part.

NARDONE: Because you have a very curious relationship with translation. You talked about this earlier when you read “Glenn Gould Negotiates the Danube in the Company of a Raven”. I imagine you listening to this piece of music and trying to map out: well, this sound might look like this shape, and this shape can be this part of speech, and moving on like this through the entire piece of music until you have some kind of schemata for a poem.

Then there’s another poem in Crabwise that is a phonetic or homophonic translation of Ho Chi Minh?

DODDS: Yes, “The Official Translation of Ho Chi Minh’s 1966 Telephone Call.” I was driving back and forth to work and I had a cassette deck in my truck–quite a hi-fi system–and I had seen on eBay that there was this shoebox of supposed CIA wiretaps of Ho Chi Minh that were for sale. So, I bought this shoebox of tapes. They were just one side of a phone conversation in Vietnamese.

DODDS: Well, it was somebody. He was male, anyway.

NARDONE: And how’s your Vietnamese?

DODDS: I don’t know any Vietnamese at all. They are cadence translations. I think they’re probably exact. I imagine that they’re better than the original, even.

NARDONE: At this point, I’d like to invite everyone here in the audience to interject or challenge or heckle Jeramy if you disagree with his opinions on his own work.

DODDS: Well, I don’t know anything about the work.

I’m being quite serious. There’s so much in that book that I don’t even know about.

NARDONE: This morning, I was reading again in Jack Spicer’s Vancouver lectures and he was going on about trying to clear the furniture away so that one is able to receive poems. He wants to stop the subjective I-poem from happening, and move into a terrain of poetry he might not have initially intended. He speaks of himself, half-jokingly, I think, as receiving poems from aliens, and as being a kind of radio antenna. The poet as medium. So, I guess my question is: do you communicate with the aliens?

No, well, maybe to touch on the flakiness of that, I like the idea of making a poem that’s going out into some void, communicating with that void, and the reader is just caught in between, perhaps. I want to make sure the reader is engaged, but maybe I’m channeling the poem so that it’s going nowhere. Whoever gets caught in the crossfire, it’s their own fault. But, as far as channeling, no “being” has made itself available to me, yet.

DODDS: I’m not against trying it.

NARDONE: Moving back, or forward, to the Edda, you mentioned that this translation was and is work to do in between poems, a kind of distraction from composing your own poems, and I want to press you on this. Reading the excerpts of the Edda that have been published thus far, there are many components to that work that seem a natural progression from the Crabwise poems. There’s a continual consonantal clanging. There are words that seem to mirror or derive from one another in proximity, then blow up or disperse into a whole other sound and sense grouping of words. There are vowels being ridden over lines, variating, and coming up against one another in a kind of point-counterpoint structure. Do you see this progressing into these Edda translations?

DODDS: I definitely do. But it’s being governed. I can’t get too crazy with it, because there are word choices that I have to make to stay within the order of the poem. This stops me from getting too naughty with the consonants. It’s alliterative verse, so, I’m at home in that, so to speak, but it doesn’t allow for many end rhymes. I’m trying to stick with the cadence of the original. Nobody speaks Old Icelandic, or, we don’t know how it was pronounced exactly, but I’ve been listening to the poems read in modern Icelandic, and have been trying to capture those cadences.

To address again your composition question, at the beginning, a lot of those poems in Crabwise, I recorded them constantly, and then listened to them over and over, and would say, well, that sounds klutzy. And I edited it accordingly. So, there was this constant going to the recording and listening and trying to tune my ear that way. The training that I gave myself in Crabwise, with the translation experiments, I am trying to put to work with the Edda.

—-
Jeramy Dodds is in Orono, Ontario.

Michael Nardone is in Yellowknife.