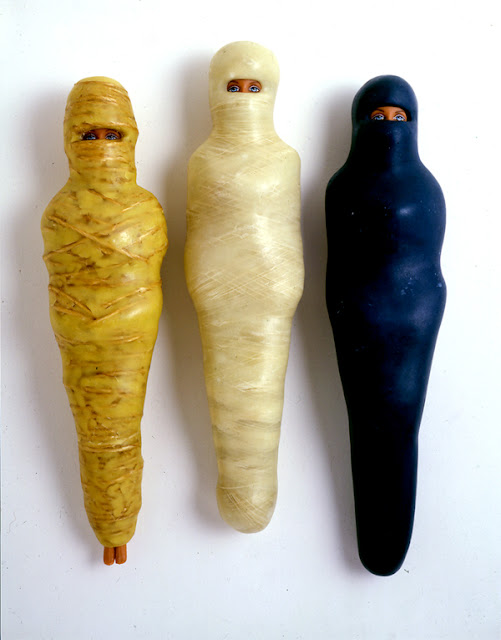 We cut their hair off. Chew on the breasts. Paint their bodies. Slip a condom over their heads and dip them in Spaghettios. We are never quite so inventive in imagining our own bodies as when we encounter this sterile, unreal version of femininity. Our first canvas. Our first manifestation. Our first bout of hostility or reverence. One girl crying because the other has her Barbie in her mouth. There is something disturbing in this. As if a bear has broken into the den of childhood and dragged it out by the neck. There is little indifference. There is wanting. Accumulating. Assembling. Hour after hour of training on how to be a feminine consumer. How to want. How to walk the mall. How to make of yourself and ornament. Adornment. Slip into pink nodes of modernity. Or here, as the artist EV Day shows us, cocoon ourselves in long syrupy straps of femininity.

I have a long and complicated affair with Barbie. Here are two shots from a series called “Barbie Reaches Out,”which arose from a sense of frustration about the interiority of femininity…I woke from a dream in which it was clear that women inhabited a cave, and that the cave became the mind. The women might be out of the house, but the house was not out of them. How then, do women affect change? How do they connect with the world? I am thirsty, not only for images and narratives that are outside, but outside of history too.

Is the only way a woman’s voice is of interest when she enters a male narrative? When she enters a classic text? Must we enter the public sphere draped in Virgil? Sophocles? Pessoa? Does this male cloak mute the domestic, shift the tenor to a more neutral tone? Make femininity a tad more tasty?

Thanks to Kate Durbin for pointing me to EV Day. More thoughts on this in the coming weeks.