SQ: I love these, Jen. I’m amazed at how different they are, given the sameness of the type, the basic poem, as a visual from this distance. Can you tell me how you got started?

JB: Thank you, Sina. Well, I studied photography in college, in addition to writing, and have on- and off-again experimented with shooting text. I’ve also worked with filmmaker Cathy Cook on some of her filmic and animated interpretations of poems. And I’ve been informed by my collaborations with the visual artist Mark Wagner, who gave me a free education in the book arts. In an age in which the majority of our texts are disposable, I became interested in documenting the image of poems (or excerpts of poems) in their preserved state, in books, as well as celebrating the act of reading poetry. A kind of making poetic still lives.

JB: I started experimenting by shooting some poems in Gregory Corso’s Elegiac Feelings American, holding the book and poem up to the big blue San Francisco sky, which seemed a fitting tribute to him. I didn’t get these quite right. The process cohered for me when I shot one of my favorite poems by Carol Mirakove. With that piece I began thinking intentionally about light, angle, and environment and how they bring something new to a poem.

SQ: Some of these are very transformative. The way the Brooks poem struts out, such a tall column of strength, but also, that kind of leaning and decorative bent. Very powerful and yet such a subtle twist on a classic poem. And I love the title (I’ll post this one). How did this one come about?

JB: Before I take any photographs I sit with the text. I listen and look for the parts that are reverberating. Sometimes it is a few words. Sometimes it’s the whole poem. To see Brooks’s best-known poem on the page, which is so visually successful, is to hear her in your memory reading it. How she punched the “we” while swallowing it. How “we” is the beginning and the end, everything and nothing. I wanted the word, which ends Brooks’ lines, to instead be the strong centerpiece of the photo. 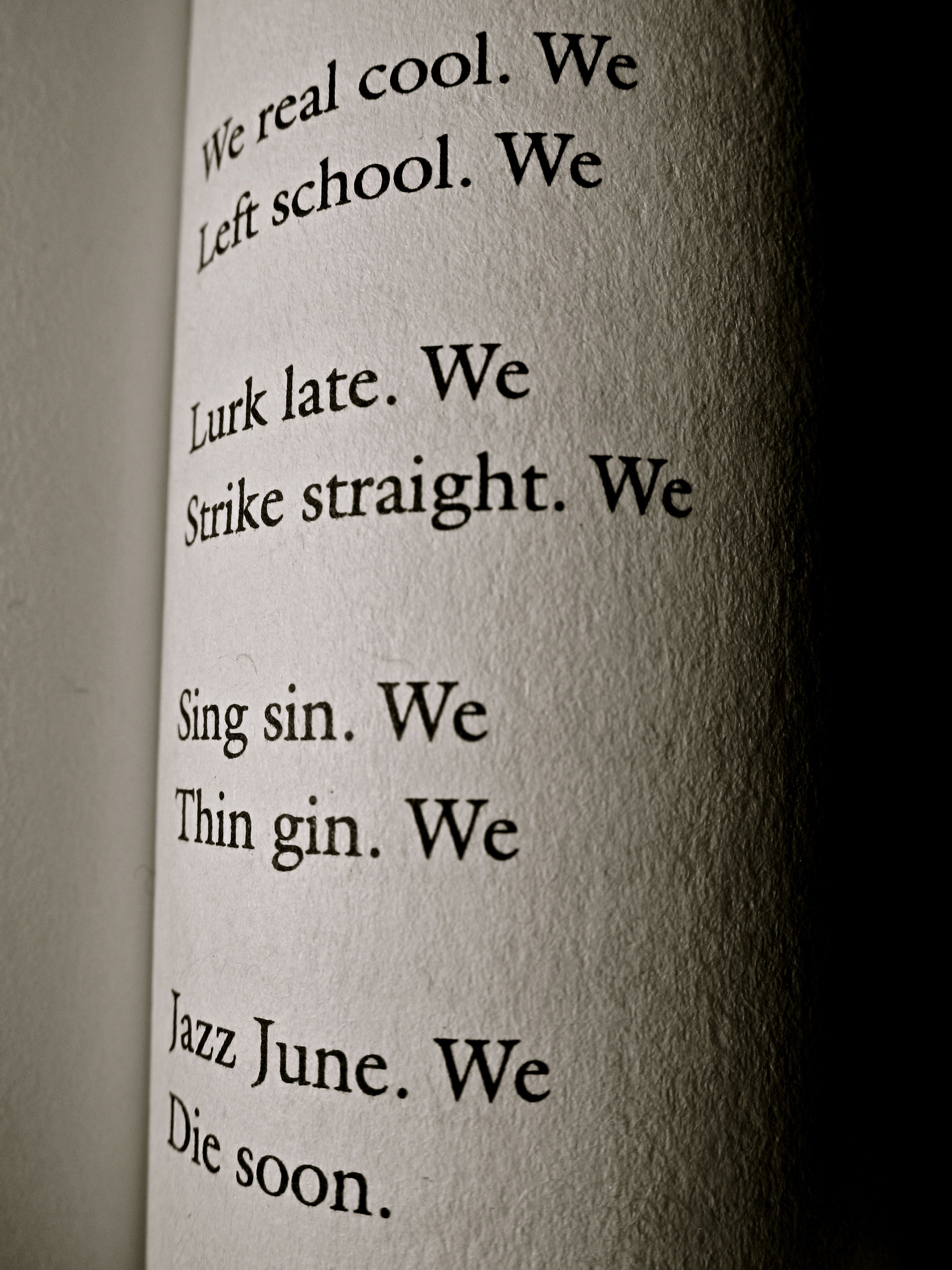 SQ: You know I love street art/interventions and for a while I was working with found objects in New York. These are similarly sort of random, but also they evoke a new relationship to the text. As if it could be, or should be part of a landscape. Do you know the work of Allyson Clay? She’s a Vancovuer photographer. I included her in a folio of Canadian work for Drunken Boat. She is looking similarly at the text entering into other worlds through that text, though here the text isn’t the point. For you it is. Or is it?

JB: Thank you for sharing Clay’s work. I wasn’t familiar with it and she definitely seems like a kindred. Yes, for me the text, the poem, the book is the point. Sometimes, as with the Brooks piece, I am aiming to transform the poem visually. With other pieces, I am also attempting to inject and document the poem/book in the public sphere. There is something to be said for outing the poem.

SQ: Were you consciously thinking of another photographer? Are these translations then? Or reframing? Or, can we say they are a kind of biography of reading and walking?

JB: Visual artists who use text as their central element have provided great inspiration. Notably Jenny Holzer, whose work I’ve admired since the 80s. Also Joseph Grigley’s and Mel Bochner’s work in different ways. Because I studied photojournalism and not fine art, I am drawn to documentation and the street over the studio. I have always admired the work of photographer Bernice Abbott who floated in Parisian literary circles and then returned to New York to record street life and architecture. And lately I have been amazed by the work of Vivian Maier. Her work has only recently been brought to light and much of it is still being cataloged. She had an incredible eye, as well as a genius for finding the unexpected.

SQ: Do you have a favourite? Can you tell me about it?

JB: I am really pleased with the shot of Kevin Varrone’s poem because it is so simple and yet was extremely complicated to create. The shadows cast on the poem were produced by my holding another book at an extremely awkward angle interrupting the natural and rapidly fading dusk light streaming through my window. And though I am not necessarily interested in making literal connections, in this piece I like how the visual elements I introduced relate to the content of the poem. 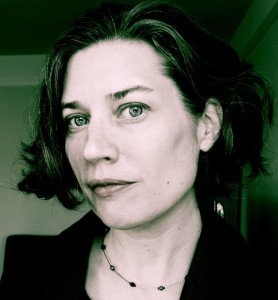 Jen Benka is the author of the poetry collections Pinko (Hanging Loose Press) and A Box of Longing With Fifty Drawers (Soft Skull Press); the artist book Preamble, a collaboration with Mark Wagner (Booklyn); and co-author, with Carol Mirakove, of the chapbook 1,138 (Belladonna). Her poems and essays have appeared in numerous print and online publications, including Crossing State Lines: An American Renga (Farrar, Straus and Giroux), Eoagh, Failbetter, How(ever), make/shift magazine, and a forthcoming celebration of the poet Etel Adnan (Post-Apollo Press). She has also organized several large-scale poetry events in New York City, including a 24-hour marathon reading of the collected poems of Emily Dickinson. Jen holds a BA in Journalism from Marquette University and an MFA in Creative Writing from The New School. She was recently named the Executive Director of the Academy of American Poets. She appeared previously on Lemon Hound in 2006.