This was my first attempt, after months of drawing maps and filling notebooks, at writing an overview of the city in People Park. I’d intended to use it as a prologue to the book, an initial sketch of the city’s geography to orient the reader. But then I wondered if the novel might be better served by disorientation—that is, the city (and book) being intentionally bewildering at first. I like books that teach you how to read them, an experience analogous to travelling somewhere new: at first we’re a little lost, and only begin to feel comfortable as we figure out the language, the people and all the various codes and strictures that make each city unique. In this excerpt, too, are all the placeholders I used for neighbourhoods and transit stops before I figured out what everything needed to be called, and many other things I ended up excising from the novel—including, of course, this prologue in its entirety.

At the west end of the park replica, lodged into the hills, was the museum: all ivy-dripping, rippling mirrored glass that reflected the earth and sky. If the model museum folded open, it would reveal installations by local artists in the galleries on the top floor; below that, exhibits of dinosaurs and archaeological curios. There was a wing of medical oddities, conjoined twins in jars and the great meaty lumps of cysts and tumours hovering in glass cases, and another displaying various feats of technology and science, including a hall of medieval weaponry, maces and broadswords and lances and chainmail, and great suits of armour standing at attention on either side of the doorways. A bulbous addition housed the planetarium and a climate-controlled, woodsy habitat that traced local flora and fauna from the prehistoric era to the present day; an amphitheatre hosted lectures and parties. The basement housed the city’s archives—endless stacks of metal shelving, fluorescents buzzed above. And then, of course, in the foyer of the model of the museum would be the model of the city, and maybe afterhours there’d be a miniature version of Debbie standing over it, looking down, thinking about the infinitesimal version of herself inside the model, etc.

What was missing from the model were people. The miniature version was a ghost town, and Debbie felt as though she were looking back upon some post-apocalyptic future. The only movement were the monorail trains, which traced their looping, fractal routes around the city. When the world ended, she thought, watching them, all that would survive would be machines, how depressing.

Debbie began to imagine life into the model. Down the hill that sloped from the museum toward the reservoir she pictured kids tumbling, then standing dizzily at the bottom and staggering about. Over the reservoir arced a bridge where Debbie liked to stand and watch the goldfish rudder by below; around it paddleboats would be scudding about over the water and on the benches old folks would be chucking bread at the swans and shooing away the pigeons. From the boathouse emerged a newly wedded couple, showered with rice and confetti; they made their way down the steps to the docks for photos, flanked by relatives and friends.

Beyond here was the meadow, the gazebo, and to the south of that the woods, all the native species of poplar and elm and pine and maple and birch, shrubs of sumac, and of course the willows, and now that it was springtime here the squirrels would dart up and down their trunks and go bounding out over the lawns. When things quieted at dawn or dusk you might see a deer timidly nosing its way out of the trees. There were rumours of wolves, or at least a wolf, though no one had heard anything of wolves in years, if there had been even one it was likely long dead now. There was never any howling, not even at the full moon, which had just passed that week, and now was fading again, another slice nightly nicked away. And it was here in these woods that Debbie knew in the evenings you’d find a certain breed of husband who had escaped his wife for a few hours, skulking in the shadows, waiting for another just like him; they’d take turns on their knees.

The woods bled into the campground that bled into the public beach along the south shore, while along the top end of the park ran the big wide boulevard of People Park North (PPN to locals). Past the meadow on the east side of the park were the boutique stores and art galleries, the cafes that scattered tables and chairs onto the sidewalk. It was a lovely place for a stroll, the lamps were fashioned in a gas-lit style and fluttered Silver Jubilee banners. The old cathedral had been converted into lofts, the original stained glass intact, the clock tower frozen now, Debbie recalled, and was it working again? At the covered market tucked into Eastern Common young couples with dogs and/or strollers shopped for vegetables with the leaves on, bushels of garlic sprouting stalks such as you’d never see at a supermarket; this rendered them better.

It was up through Parkside East that now half the morning’s crowd would be retreating, toward Cathedral Station in the northeast corner of the park. From there the students took the Green Line toward the airport, the trains dumping them along the way at various points near campus, some rode all the way to campus, to the dormitories—here was the train, now, whizzing around on its rails across the model, out to the eastern shore, through the student ghetto, a grid of houses flaking paint, their lawns dead or dying, a neighbourhood that used to comprise a working class contingency of self-made labourers and their stay-at-home wives, and in many of the driveways used to be vans bearing the insignias of various painting and construction and plumbing companies. But those immigrants had had kids who’d gone to school with no interest in trades, grown up and gotten careers in law firms and ad agencies downtown, and moved to bigger, newer homes off-island, homes they claimed to have built them themselves—which was funny, thought Debbie, and was sure their parents thought so too. They were prefab houses, the work only had to do with choosing colours and styles of sink.

The houses here had front porches once the site of family barbecues, now littered with empties, bicycles chained together, random street signs stolen during drunken escapades. Occasionally you’d find a house with a landlord who wasn’t so ambivalent, who might shovel snow or mow the grass or fix the roof. There were a few bohemian professors who lived out here, too, and even a few older couples who’d stayed: some regarded the students as a sort of pestilence, eyed them sideways from their porches or on the way to their cars, sipped tea in grim silence in their kitchens while bass thumped from car stereos passing on the street. There were others of course who got along, who felt a sort of grandmotherly or grandfatherly kinship with their young neighbours, who might even take over some tarts or cake; and the students would listen to their stories and remark afterward how much there was to learn from older people, nod sagely, then dip to take a deep long hit from a towering bong.

Campus was a giant parking lot studded with cement blocks: residences, lecture halls, athletic facilities, offices. Debbie remembered how at night it was lit in sporadic blue pockets; the airport was so close that too much lighting would distract the incoming pilots. Overhead flew planes all day and night, the sky streaked with their cloudy trails. They lowered blinking from above or roared up into the sky while on campus the students trotted around with their backpacks and prejudices and enthusiasm and hangovers, disappeared into lecture halls and came out an hour later, some knuckling sleep from their eyes, others ready to take on the world.

Or on the street outside Cathedral Station the tourist buses would also be parked, parades of vacationers filing aboard. They’d head to the southeast corner of the island where stern and stony up on the clifftop Fort Wendy surveyed the lake. Here tour guides done up in period costume led groups through the ramparts and dungeon, narrating the old days of battle beside cannons clogged with cement. It was a winding drive up the hill to the same parking lot where late at night teenagers fucked in their parents’ cars; that morning before the tour groups arrived a crew would have gone about, doing their regular sweep, spearing condoms into garbage bags.

Or from Cathedral Station the Red Line curled northwest, up into the newer subdivision of Northshore, where a twisting network of streets was crammed with duplexes and semi-detached units and garages with no driveways, only street parking, on every other roof a satellite dish; antennas graced those between. Here was a place where as its inhabitants liked to say you had everything you needed: a supermarket, a shopping centre, a gym, banks, schools, a multiplex cinema, baseball diamonds and soccer fields. Why go elsewhere in the city? Many people here did not. It was safe, most of all, for kids to play in the streets; to call them in at dinnertime all you had to do was yell.

Further west on the Red Line was the Canal Street Stop, where few passengers got off, few people got off here anymore. Between Canal Street and Northbridge, where the canal met North River in a froth of putrid greenish foam, was Island Amusements. This had once been a popular place for family fun, thriving with a Twirl-a-Whirl and a Funhouse and Freakshow, reduced now to two rides appropriated by the city as Historical Sites: the single rusting Thunder Wheel that ratcheted around in slow rotations, its carriages swaying creakily, and the rickety Hurricane rollercoaster, a trembling wooden skeleton whose carriages climbed clacking up and whooshed rattling down. Beneath the rides the city-employed workers, high school drop-outs and kids on placement, slumped at their posts, bleary eyed and distant. They’d let you ride for free if you asked; they didn’t care.

And then of course was Northbridge, that great stone slab, so thick and secure it looked as though the land had been added to it on either side, rather than the other way around. It was like the spine of some great prehistoric beast stretched over the river, daring anyone to cross it. Gargoyles perched on its abutments, the date of its founding immortalized on a plaque over which loomed the words, this bridge we build with each step across. Here at the parking lot a few mainlanders would have left their cars, and off the trains they came and into their cars they went, back over the bridge and home.

And those that continued on the Red Line would pass Island Stadium where the baseball team used to play, but because of low gate receipts had moved elsewhere. Now the stadium was used for poorly attended soccer matches and rock concerts and the odd monster truck rally that always ended in multiple arrests for public urination. It was a harp-shaped structure looming out of the model, grey, and at Stadium Station the miniature monorail braked and Debbie imagined the real thing: doors barely opening before they shut, no one got on or off. This was the last stop. And so the train slid out of the station, back the way it came. 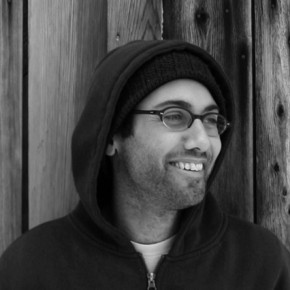 Pasha Malla is the author of four books. His most recent, a novel, is called People Park.