Some years ago, during a seminar on Joanne Kyger in one of my favourite classes at McGill (“Poetry at the Mid-Century: the New York School and the San Francisco Renaissance”), my professor compared Kyger’s fragmentary poems to icebergs: “almost all of it is under the page level,” he said. They hint at larger meanings, to be uncovered by the reader. I couldn’t help but return to his metaphor (and, honestly, to Kyger’s work) throughout reading As Long As Trees Last, Hoa Nguyen’s new collection of poems. The fifty-seven works that comprise the collection are short but dense, and approach meaning through meticulous imagery and multisensory descriptions. One poem, for instance, opens with the aural description “toilet seat slam” (37). Elsewhere, Nguyen writes “chimes” (10, 24), inferring their sound. In the collection’s press release, Nguyen’s poems are described as “chiseled yet spacious,” but in leaving so much to be uncovered, Nguyen hands the chisel to her reader.

The poems in As Long As Trees Last orbit the possibilities of selfhood. Throughout the collection, the speaker, rather than claiming coherent subjectivity or understanding of “I”, instead approaches various potential identities with the same regularity as she does quotidian tasks. We see her explore the roles of woman, mother, citizen, and even of proud poet; selfhoods that she ties intimately to spaces and nature, to histories, myths, and cultures. Some of the roles she inhabits, like when she infers motherhood with the line “my boy wears shark pajamas” (2, emphasis mine). Others she identifies with at a distance, like in the poem “US”, when she criticizes “US citizens” because they “fill up their ‘free / time’ with television” (36). The double-entendre of the title, though, of course aligns the speaker with the citizens she critiques. There’s a line in “Dirt-Under- / Nails Dirt” which might be intended to describe love, romance, or friendship, but I think it also perfectly defines the idea of the mutable self that Nguyen circles:  “We love are      folds / around the stripes of being” (7).

Furthering her exploration of multitude identities (and, with many lines in quotation, voices), Nguyen plays with perspective and shape-shifting imagery, portraying the fluidity of the self. “Soul Poem”, for instance, moves between different points of view. Nguyen opens the poem with a description of “the soul” (but not hers), then moves to a coherent subjectivity in the next couplet, which she undermines by the couplet’s end: “I stood on a small hill / impossibly tall and alien.” The fact that the speaker feels alien in her coherent “I” exemplifies Nguyen’s rejection of a fixed identity. Suddenly, the poem’s focus shifts to the third person, fracturing the voice of speaker:

The daughter was changed

This daughter is only one of several instances of shape-shifting in the collection. In “Rain Poem,” the speaker becomes (or hopes to become) “‘the Professor of Transfiguration’” (6); In “Unused Baby,” Nguyen alludes to the “Frog Husband” (10): “I burn / your frog skin to keep you / in the shape I prefer” (10).) Nguyen ends “Soul Poem” with another focal shift, shifting again to first-person and again to third (“I don’t / wear shoes …. Her ponytail / flipped when she swirled”), conveying both inner dislocation (or as she quotes elsewhere, “‘extreme fragmentation’”(41)) and a multifaceted self-awareness.

As fluid as Nguyen portrays the self, most of the poems in As Long As Trees Last are grounded in the concrete realness of everyday. Quotidian responsibilities — “Wash towels and rags / on Wednesdays” (5); “Broil the asparagus” (11) – show how much the routine of every day anchors the self. (It’s also no surprise that much of the quotidian tasks are instances of domestic work, typically female responsibilities). In “Rain Poem,” for example, Nguyen plays with the structure of the task-based To-Do list:

making the list run slightly absurd while remaining consistent with the poem’s monosyllabic rhythm and thus merging the mutable, shifting speaker with her very regular, concrete reality. Nguyen further anchors (or perhaps paralyzes) her speaker in the very real problems of debt (public and personal) and drought. In “Stimulus Drive Bulge,” she talks directly of the “ ‘Total Public Debt’ // 2001: Three point three trillion / 2009: Seventeen point three trillion” (38), and writes about personal money issues in “The Problem” (“Need a new notebook/ And what does it mean to not want”), and in “You Can Sample”: “Money goes   tied to the subprime / we go / ‘month to month’” (39). My favourite allusion to the cost of life and the “problem of money” (35), though, is the repeated line “There are no free Popsicles” (40,45) in the poems “Another Drought Almost-Sonnet” and “Another Chinaberry”. Nguyen follows both iterations of the line with “I would like to see it rain again” (40, 45 with slight variation), integrating the personal drought with the natural. Between quotidian tasks and the problem of money, the morphing self is forced to stay rooted in the real.

Drought is the least repeated natural imagery in the collection; as the book’s title suggests, trees, and the birds that inhabit them, recur regularly. Birds, in their diversity, become a metaphor for people, potential characteristics to inhabit: “You could be the Turkey Vulture / grooming your mate for life” (24). They also serve as metaphor for the speaker herself. In “The Spleen Rules Transformation,” Nguyen opens the poem with the line “changing plumes / bare upon a notebook” (58), paralleling the avian metaphor with the role of the poet. In the following poem, “Can’t Help it,” she continues to conflate the avian with the human:

Where to fly exactly with split

feather tails and gnaw the bow

Anthropomorphizing birds as such provides an external projection of the fluid (flighty) self. But people, like birds, also like to “nest in translucent / comfort” (23), and throughout As Long As Trees Last, trees serve as a metaphor for the home, the environments, and the institutions that we inhabit. The poem “Feather” ends with the line “trees be the church” (32). In “Too Fast Spring Birds,” a tree is “a strong thing”, something to lean on, as well as a “hearth” (17). In the rich object poem “Chinaberry”, Nguyen details the functions and uses of the chinaberry tree. “Also called Bead Tree” (15), its fruit is poisonous to humans but turns its avian inhabitants into “Drunken songbirds” (15). When the fruit hardens, it provides “seeds for making / rosaries”. The chinaberry is a tavern and a church, each a different space for salvation.

With the real comes the unreal, as Nguyen also explores definitions of the self through the reworking of myths. Nguyen depicts the duties and the powers of women through their images and stories in ancient Greek, Roman, and Mayan myths (which again brings me back to Kyger, who also retold myths in her poetry). In “Lisa’s Camile In Memoriam, April 18, 2010”, Nguyen writes:

She is also called Enyo

Goddess of War with torchlight

These female roles exist for even war goddesses like Enyo and Bellona, who were not only fighters but also sisters, daughters, and wives. In “Lady Xoc”, Nguyen defines female domestic and political roles via the Mayan myth of Lady Xoc, wife of the warrior Shield Jaguar and one of the few women in Mayan culture (or at least depicted in Mayan art) to perform rituals and have political power. “She is Lady Xoc”, performing blood-letting rituals, but she also has an enormous responsibility as wife: “how to be a Jaguar God and wife / of that  You need a stingray / spine and decorated fringe coat” (21). Playing again with point of view, Nguyen depicts Lady Xoc as powerful in both her public and private roles. Comparatively, “Medusa Poem” explores another kind of female power: “These are my solo powers / hair   eyes   mouth   tongue” (54). Medusa is sexual but not sensual. The poem is aggressive and angry. It is the one with the most profanity. “Unarmored as I am  you can / take my head for your fucking / chaste warrior shield” (54). Interestingly, “Medusa Poem” is in the first person; Nguyen presents Medusa as a coherent, powerful woman. She also returns to an image of shape-shifting, although its Medusa’s victims and not herself: “Rocks that I turn you into / shift shapes like that” (55). Shape-shifting, rather than representing a fluidity of self, becomes a power and weapon.

“This is me very plain” (43), Nguyen writes at the end of her poem “Bread.” Despite the multitudinous voices and selves in As Long As Trees Last, there is cohesion to the collection. The birds and the chinaberries and the very real practice of every day life all provide a structure and environment for the self to be explored. It’s this chiseled space and this fluid self that keeps bringing me back to Kyger (of whom Nguyen says she has learned a lot): “These several selves that move one self around” (Kyger, As Ever, 143). ` 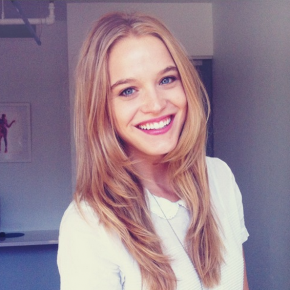 Dana Drori is a freelance writer and model living in New York. She received her B.A. (honours) in English Literature at McGill University, where she wrote her thesis on the significance of the flâneuse in Virginia Woolf’s works. She is easily made happy with a good collection of poetry or an early-20th century novel (the harder the aristocracy falls, the better), and wonders when, if ever, she’ll go to grad school.