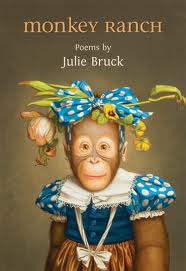 Monkey Ranch is Julie Bruck’s third collection of poetry published by Brick Books, following The End of Travel (1999), and The Woman Downstairs (1993), which won the A.M. Klein Award for Poetry. Perhaps you already know that Bruck, a Montreal native who has been living in San Francisco for 12 years, won the 2012 Governor General’s Award for Poetry. She has also won two Pushcart Prize Nominations, two Gold Canada National Magazine Awards, and has been published widely in both Canada and the US. Whether or not Bruck’s reputation precedes her or whether you’re reading her poems for the first time, her newest collection is full of surreal images grounded in reality and a seemingly effortless charm.

The cover of Monkey Ranch, taken from the detail of a painting, “Cookie … waiting,” by Donald Roller Wilson, is at once whimsical and melancholy, with the monkey’s colourful polka-dotted dress and bow lightly contrasted with its somewhat lost gaze.  Bruck’s title poem, about a child raised on a ranch full of monkeys, appears as the first poem in section IV. It first strikes one as fanciful, wondrous, “… a screaming/ kaleidoscope of stripes chased/ stripes.” Striped monkeys, a kaleidoscope—these are the stuff of childhood delight. In the second stanza, not only does cruelty abruptly surface, the children are made to feel complicit in that cruelty: “We starved our monkeys.”

Children are at the whim of their parents, no matter what that whim may happen to be: “And Mother/ always favored chinchillas” so the animals had to starve. “Mother” spelled with a capital “M” gives us a sense of formality—She who must be obeyed. The ordinary is made extraordinary in Julie Bruck’s book, where family ties can be dark or tender, sometimes both simultaneously. 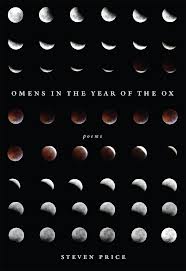 Omens in the Year of the Ox is Steven Price’s second collection with Brick Books. His first, Anatomy of Keys, won the Gerald Lampert Award and was named a Globe & Mail Book of the Year (Brick Books, 2006). In interviews, the Victoria resident and teacher (University of Victoria) has said that while he wrote his second collection of poetry he was also working on his first novel, Into that Darkness (Thomas Allen, 2011). Price’s novel, Robert J. Wiersema writes in the National Post, is “a collection of post-apocalyptic quests, an account of loss in its myriad forms.” The themes of loss and tragedy seem to have seeped into his poetry, too.

Omens in the Year of the Ox is an ambitious piece of writing, one that interlaces mythology (Icarus, Medea, Odysseus, Orpheus), neologisms and compound words (“windflinted,” “thumbfogged,” and “bloodrubbed,” to point out just a few), with an overwhelming sense of foreboding. Despite scrambling to Google to refresh my memory and in some cases to educate (“Palau Guell” is the name of a mansion built in Barcelona, Spain, designed by Antoni Gaudi; “Augustine of Hippo” is another name for Saint Augustine; “auto-da-fe” was the ritual of public penance of condemned heretics and apostates that took place when the Spanish or the Portuguese Inquisition had decided their punishment), these and other allusions and references add weight to an already weighty book. Heavy with historical import and heavy in its subject matter, Omens is an unflinching look at the world.

You don’t need to know the exact meaning, though, of “Auto-da-fe”, the title of one of Price’s prose poems, to appreciate the power of its lines: “Augustine says in the sunlight the hands of our mothers/ burn like sunlight, like they aren’t there at all.” Price compares the hands of Augustine’s mother with the wrists of a girl he knew who lifted her cuffs to display “cigarette burns in small white lesions.” Whether or not it’s overwrought to make these comparisons—were the girls’ burns self-inflicted?—is hard to say. Does the poem work? Do I keep reading it over and over again for clues? Yes. Then it must work. Certainly the writing is affecting and provocative.

While Bruck uses the image of the Monkey—capricious, wild, festooned in blue polka dots—Price’s image of the Ox is stalwart, stable, and persevering. Bruck’s trickster monkey shows up in Russell Edson’s words, one of the book’s epigraphs, “Sort of, said the Monkey merchant” and in the book’s opening poem, “This Morning, After an Execution at San Quentin,” where a howler monkey appears at a trip to the zoo, its drone “more retch/ than howl.” The speaker’s little girl hears a “Monkey singing,” while her mother sees a “raised cage,” and the cages of the zoo echo the prisoners in their cells, as the “cold spring air arrived, / blown from the Bay where San Quentin/ casts its sharp light.” Everywhere the parents’ views contrast the child’s; reality’s harshness is softened by the innocence of the child. There are plays of light and dark here, yet there is a reprieve from that darkness, and it is in the “small flowered legs” of the girl.

Price’s book is dark—nearly unrelentingly so—and the Ox-as-image-of-man labours without complaint. The poem that begins the collection, a prologue poem of sorts, which stands apart from the three sections, is called “The Crossing.” The overall grimness and griminess are matter-of-fact omens, as though to see the world in any other way would be foolish. “If the ill of the world issues/ up out of the world, then there is no course but to praise it. As Hopkins praised it.” The speaker carries Gerard Manley Hopkins’ poetry throughout Spain with him, “wanting to get closer/ to something. His stark Jesuit suffering, perhaps.” It’s going to be a painful voyage Price takes us on, love and light glimpsing out, sparingly, but it will be an edifying one.

Price loves language and clearly enjoys the sound and rhythm of words. In “Field Guide to the Sanctuary,” alliteration and internal rhyme find their way into the poem: “Is salt and savage, / Snub-blunt and sculling/ the grey gulls punch/ their weight in the spray.” The repetition of the vowel “u” is reminiscent of the kind of wordplay found in Christian Bök’s collection, Eunoia. In “Racoon in a Ditch,” a similar aesthetic can be heard in Price’s cadences: “Asplayed, astunned, so unskinned it seems/ but gleeslicked gut: innards peeled back like a glove.” Price is strongest when allowing shades of light into this apocalyptic collection, in lines such as “What you feel is love/ lately worn, warm with blood.” In my opinion his prose poems are the most affecting, less self-consciously crafted than his others. They are parables—small quiet mysteries like “Ghosts” or “The Persian General.” Skilful and artless.

Bearing in mind that the latest Lemon Hound theme is feminism, I’d like to point out that Bruck’s thematic concerns are what are sometimes called “woman-centric,” involved in generations of families, the parents we had and the parents we become, the image of the child and her “Milk Teeth.” The speaker reimagines the unhappy marriage her parents had in “Entre Chien et Loup,” her father’s humiliation in “A Marriage,” and the speaker’s own shortcomings as a mother in “Girl in the Yellow Cardigan.” It’s these everyday domestic issues that in Bruck’s deft hands become weighty with importance, gift-wrapped for the reader in surreal imagery. In “My Father’s Clothes,” she says her father “could have been a dressmaker’s dummy,” as “No one showed him/ how to live in his clothes, how an elbow/ needs to worry its way through a sweater/ like the nub of a spring bulb.” Still, there is nothing prosaic about her keen look at the family tree. Her craft is guileless, smooth as silk and as terrifying as Poe. In “How to Be Alone,” the supposedly instructive phrase “There is no more today,” turns out, inadvertently, to be terrifying. But the final image in the book, of a dog riding in a truck, “his piebald gums to the delight/ of all those we pass” is the one smile we are left with, and that dog is all the hope needed.

If women find hope in the smallest things, Bruck is keenly aware of it, parsing out the difference between the sexes in “Snapshot at Uxmal, 1972.” The speaker’s husband goes to “a larger ruin for the day,” while “she will photograph only/ small details in black and white.” His is a world of “vast scale” and hers is “a single weed growing.” In a sense, that’s the difference between Steven Price’s collection and Julie Bruck’s: the former has the vast scale of bloody myths and early civilization, one ruled by male thinkers, architects, and theologians, spanning to the present; in the latter we zero in on a single family, their daily rituals, and the memories sparked by their faithful matriarch.

Reviewed by Toronto writer and editor, Myna Wallin, author of A Thousand Profane Pieces (poetry, Tightrope Books, 2006) and Confessions of a Reluctant Cougar (novel, Tightrope Books, 2010). She is at work on her next collection of poetry, tentatively titled, “Death, Wildlife and Taxes.”