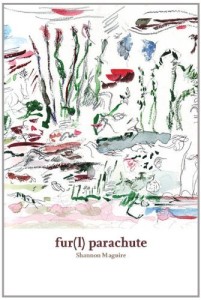 Following up on her shortlist nomination for the 2011 Robert Kroetsch Award for Innovative Writing, Shannon Maguire–proving herself to be a stunning new voice in Canadian letters–has released her first trade collection fur(l) parachute. Prior to this release, Maguire has proven to be most industrious, producing several volumes including the chapbooks Fruit Machine (Ferno House, 2012), A Web of Holes (above/ground press, 2012), and Vowels Wolves & Other Knots (above/ground press, 2011), the latter featured earlier versions of poems that can be found in this present collection.

Maguire cites “Wulf and Eadwacer,” a nineteen line fragment written in Old English, as the “surrogate” for fur(l) parachute. Little is known of this enigmatic text, which was originally found in the tenth century Exeter manuscript. Maguire writes at the back of the book that there is “no consensus as to its meaning, origin, or even to genre. Some see it as a riddle, others as an example of a woman’s lament, and yet others in the broader tradition of the elegy.” Building on the multiplicity of possible readings, Maguire further shatters the fragments, letting the pieces shiver and shine, moving through them and beyond, creating a multifaceted and multidirectional text.

While there appears to be no authoritative reading of the text, it is agreed that Eadwacer has imprisoned the speaker (a woman) on an island, while Wulf (her lover and/or husband) is in exile, and might be hunted by the speaker’s people. Using a series of creative translations and rigorous procedures, Maguire simultaneously deconstructs and reconstructs this story over the course of six movements. The first, “nomanative” (a pun on nominative, the first, and queering of the text, “no man”) most closely echoes the original text:

As we move through the sections, however, Maguire begins to stretch the cord of the text, knotting into it new knowledges. “spill” uses “a Jackson Mac Low inspired set of procedures” that ties together “the lexicon from the first eighteen poems in the 1898 collection ‘Underneath the Bough’” and language of the “natural world” extracted from the “Wikipedia entry for the Guelph of Mexico BP oil spill” (106) to produce poems that read as follows:

As a result, the book becomes knotted with strands running in all directions, running into and away from each other.

The poems speak to their past–a one thousand year old surrogate–while weaving into it cultural allusions and anachronisms–Shakespeare’s Ophelia and Mae West alongside more contemporary references to fly fishing (as seen in the section entitled The Midwive’s Hands) and (perhaps even) Canada’s own Tim Hortons coffee chain “roll up the rim/ en spies de” (4). Maguire then pushes us further into the future exploring animality, desire, and technologic. There are no boundaries to Maguire’s imagination–time is one, all subject matter is relevant.

While Maguire’s uncompromising vision seems to pull us further from her surrogate, she reminds us of the central sorrow filled knot–the separation of the speaker and her lover Wulf. The epigraph to section four, a quote from theorist Giorgio Agamben, reads:

“What has been banned is delivered over to its own separateness and, at the same time, consigned to the mercy of the one who abandons it­–at once excluded and included, removed and at the same time captured” (46).

Through her trans-slantations Maguire’s text seeks to overcome this sense alienation and to not only knot the source text itself, but to lead us to see the knots in what we believe to be separate.

fur(l) parachute is indeed a shining debut. Maguire is challenging, she is brave and brilliant. fur(l) is at once knotted and knotty (and naughty), bewildering and bewitching; a visionary text that looks to the past to find our future.

Eric Schmaltz was co-curator of Grey Borders. He will begin graduate work at York University in the fall and will be a regular contributor to Lemon Hound.