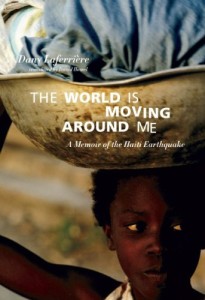 The World Is Moving Around Me: A Memoir of the Haiti Earthquake, Dany Laferrière. Trans. David Homel. Arsenal Pulp Press, 2013.

Writer Dany Laferrière found himself in a Port-au-Prince restaurant on January 12, 2010, when a catastrophic earthquake struck. It levelled much of the city, killed some 300,000 people and rendered millions homeless:

I was waiting for my lobster (langouste, on the menu) and Saint-Éloi for his fish in sea salt. I was biting into a piece of bread when I heard a terrible explosion. At first I thought it was a machine gun (others will say a train) right behind me. When I saw the cooks dashing out of the kitchen, I thought a boiler had exploded. It lasted less than a minute. (14)

A native Haitian who left his country in 1978 after the murder of a friend and the imprisonment of colleagues, Laferrière was visiting the country to take part in an international literary festival. He explains that his is meant to be a journey not only of homecoming, but also of introduction. Laferrière has convinced a Montréal journalist to come with him to the island, in hope of establishing a dialogue between francophone writers from his adopted home and his native one:

I’ve been living in Quebec for thirty-four years, I know everyone on the literary scene, I’ve read most writers working today, and I felt it was time that Quebec writers come and see how Haitians live in their own country. I don’t think it’s healthy to have a good friend who knows you so well, who has looked into the hidden zones of your life, but who has no sense of the country you came from (58).

In the end, that journalist ended up with a much bigger story than she’d bargained for. Rather than covering the everyday lives of ordinary Haitians, she found herself documenting their agony, survival, and destruction in the earthquake’s aftermath.

The text’s short, impressionistic passages (presented in David Homel’s seamless translation) do a lot of work on a formal level. Laferrière goes back and forth in time, revisiting the earthquake and its aftermath again and again, even as he goes on with life. In this sense, the book works like memory does, flashing and out of sequence. And Laferrière’s long-standing ties to the place he describes do a great deal of work too: in addition to his nephew, we meet his mother, his childhood friends, and we witness social divides, economic disparity, and breathtaking camaraderie. We see his homeland up close through its odd characters (like a “little mechanic” who draws out a tire repair to absurd lengths), its comfort foods, and familial bonds.

Laferrière’s book, we learn from an afterword called “How It Came to Be,” grew out of a sense of urgency that overtook the author while he was travelling in Europe, from a Brussels book fair to Paris, where he realized that he wanted “nothing else but this little book about the earthquake” (181). And so, instead of finishing a tome of writing advice he’d promised his publisher, Laferrière holed up in a hotel room, “the way Oscar Wilde did on his last trip to Paris,” and wrote the memoir furiously, pouring it out onto the page in a week (183).

To do so, he relied on the detailed and copious notes taken while wandering Port-au-Prince and its surrounding villages in the immediate aftermath of the earthquake, then upon a return to Haiti for the funeral of an aunt. If you read closely, you will find vestiges of the original book project, namely the writing-advice text, in a series of conversations with a nephew, who watches Laferrière closely and, like him, takes to carrying a little black notebook in which to scribble ideas and observations. “Exactly as I do,” the uncle-writer comments. “Yet I’d never told him anything about the way I work” (124). His nephew, caught in the act, insists that he wasn’t writing, and, in an almost universal refrain among beginning scribes, that he is not a writer. “A writer is just someone who writes,” retorts Laferrière (124-25).

The World is Moving Around Me presents a series of scenes, fragments, and mini-manifestos that rail against the First World’s go-to clichés of voodoo and violence whenever Haiti comes up. (“And now here comes a new label, that is going to bury us completely,” Laferrière adds bitterly, “Haiti is a cursed country” (76).) The book’s tone, like the mood of the place it describes, vacillates between a deep mourning for what and who is lost and the hope that this tragedy may prove to be a new beginning and an opportunity for a suffering and neglected country. Let the painters paint Port-au-Prince anew; let the city become a centre for live music; let international cities stage major exhibitions of Haitian work, the author entreats. For the world, Laferrière declares, has much to learn from the dignified survival of his people.

But in his less euphoric and defiant moments, Laferrière worries for the future. He asks: what will become of the orphaned teens; how will they rebuild so complex a thing as a city; how will a population that refuses to admit its psychic pain be able to heal? Even he must admit that trauma lies just below the surface for all (“those people have hidden the screams inside them” (39)), including him:

“A month after the earthquake, I’m still sensitive to the slightest vibration…. I was about to make a dash for the door when I realized the guy next to me was tapping his knee against the table – a nervous tic” (89).

But written in a fury, in a burst of energy as it was, and in spite of its author who had long refused to write about the earthquake he lived through, the book is short on reflection. Or at least on reflection about the author’s position with regard to the situation he describes. It must be noted that a major difference between Laferrière and the vast majority of Haitians (including his closest family members) is that he could and did leave Haiti shortly after the catastrophe with a Canadian rescue convoy. In contrast to his compatriots and relatives who continued to walk every day on the very ground that betrayed them, Laferrière experienced the echoes of his trauma from the relative safety of Montreal and Florida.

Please don’t misunderstand. This is not to say that Laferrière was wrong to leave (for who, under the same circumstances, would have acted differently; and the author is rightly critical of do-gooders who arrived in the country only to become dependent on aid agencies). Nor does the fact that this author is enormously successful and privileged (writing as he did from his hotel room in Paris) mean that he has no right to write about the quake. On the contrary, it is perhaps his duty, indeed every writer-witness’s duty, to write of the simple, everyday survival that he saw all around. But, as I read, I kept coming back to the fact that Laferrière was in Haiti by accident. That he could have just as easily have been elsewhere (again, unlike other Haitians) when the earth started to move around him. So, I wanted to know more about this expat-author’s relationship to the place and the people he describes. How does the fact that he no longer lives in this country change his relationship to the tragedy? Does he take a fatalistic view (that he was somehow meant to be there) of his presence in the country on the day the quake occurred? Or does he believe it was random? And finally, and perhaps most importantly, who has the right to write about the earthquake? Laferrière does indeed address this last question, if obliquely:

The earthquake is a planetary event. It belongs to everyone. What would we think if this great tragic novel ended up being written by a talented, yet mannered, young upper-class writer? Would we take that book for what it is (a masterpiece) or see it as the ultimate slap from a jesting god? … Do artists who weren’t present at the time have the necessary legitimacy to turn the earthquake into a work of art? Is the new Haitian someone who went through the event? The race has begun. (140)

I think that the most significant passage in the book may lie early on in the text, just under a third of the way through. Laferrière sits with his nephew on the hood of a car and tells him that he plans to write “about this,” meaning the earthquake, but is unable to name it. His nephew objects, and tells him “I’d like you not to write about it,” and explains that this tragedy is the event of his generation (50). Laferrière’s was the dictatorship that forced him to leave, the nephew insists, but the earthquake belongs to the young. “I can’t promise you that,” says the uncle-writer, “No one book takes the place of another” (50).

In revisiting this passage, I now wonder if Laferrière’s book might be read as an invitation to a new generation. The author acted on a writerly drive that came over him in Paris. Quickly, immediately, he wrote what he’d seen, felt and experienced without censoring himself and without pausing. The resulting text is energetic and punchy and pleasingly imperfect. Perhaps Laferrière wrote this way because he was riding a wave that gave him no choice, but perhaps he did so, too, to begin a conversation with his nephew, the would-be writer. Perhaps he is leading by example, and inviting the young to revisit their notebooks and write their own books.

The earthquake was a global event, he reminds the reader and nascent writer. Tragedy belongs to us all: the privileged, the downtrodden, the survivors, and the dead. No one book takes the place of another. Now it is your turn to write. I have told my version of the story. Now you tell yours.

Julija Šukys is the author, most recently, of Epistolophilia: Writing the Life of Ona Šimaitė. She is an Assistant Professor of Creative Writing at the University of Missouri.