Stampede bleeding through the gullet when he sneezes

Tusks that lean like dancer’s feet towards the carving knife

The sculptor is a narcoleptic

Dreams of peeling back his hands

Femur whittled to a soap dish, vine and cherub

Or her hairpin, hot with histories of sand

Sharp enough to cut the fringe that hides her furrow

– Joe Versus the Volcano

I want to get married at the mouth

of a volcano before jumping in.

It’s the sort of wish girls have in grade

school when they see their teacher

linger at the sidewalk with a hickey

passing as a birthmark Okay maybe

they don’t. I did. Once I saw my father

touch the gemstoned ear of a woman

at the store. He called her Calla Lily,

brought her a lampshade landscaped

with the island of Waponi Woo. 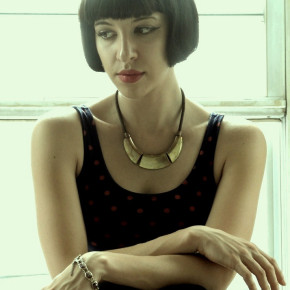 Robin Richardson is the author of  Knife Throwing Through Self-Hypnosis (forthcoming with ECW Press, 2013) and Grunt of the Minotaur (Insomniac Press, 2011).  Her work has appeared in many journals including Best Canadian Poetry 2013, Tin House, Arc, Fjords, Witness, The Berkeley Poetry Review, The Malahat Review, and The Cortland Review. She has been shortlisted for the ReLit award, longlisted for the CBC Poetry Award, and has won the John B. Santoianni Award (awarded by The Academy of American Poets) and the Joan t. Baldwin Award. She holds an MFA in poetry from Sarah Lawrence, and currently divides her time between Toronto, and New York.

Poems from Knife Throwing Through Self-Hypnosis, posted with permission from the author. Emma Healey spoke to Robin Richardson earlier this year.