the only witnesses to life are the things in it; the only listening occurs in the objects, gifts or found, which answer with being marked by living. for example, the photograph of a street from a front porch where the sofa is written with human oils and juices. the sofa received it all, including clouds of nicotine of long nights, halitosis of bad words. what is done is done.

for example, to break a jug in an act of anger cannot be taken back. not even the arm of anger; the glasses broken in an act of marriage cannot be undone. humans are breakable; if only humans were more careful, less full of disavowal, of denial, of blaming the other. if only living could be as passive as things. if only someone.

we are so written into the material of life we don’t notice the speech of this.

the grand organ that deteriorates with time, bruise, burn and cut; calcium structures drawn with hairline fractures. ingested stuff that sustains the aqueous matter, tears, snot, the blood pumping through the heart. components of a circulatory system; a nervous system; a hormonal system. this stuff cannot lie. but humans do, all the time.

walls could not lie. if there was a miracle, no one was listening.

MORE OF THESE THINGS

jeans cut with the wipe-out on the bike. the bone of a finger breaks, and the stone that was in the ring is gone. no taking that back.

sometimes things speak by leaving you just like that. there is nothing to take back. Hiroshima, for example.

some things are lost forever; the things that got up and walked out the door. you know those things father screamed about missing: “You think it grew legs and just walked out the door?” doors cannot walk off their hinges; doors are marked and left behind. doors, like dead bodies six deep, shudder when the earth quakes.

there are those things that left by accident; those things that you left behind were no accident. there is no going back. some things speak your regret in a way no word can. for example, that bike secured to the post under the porch probably died in its chains like that. losing appendages, reduced to a skeleton of limbs rusting in the snow and summer heat, collapsing at the joints, and eventually just the spine of memory. there is no word for this kind of mortality.

miracles don’t fit the paradigm of thingness. they are not human nor are they inanimate; they are not witnessed because they leave no trace except in what takes years to realize is gone. that absence begs return. but if there was no thing then how can das ding come back? who is crazy enough to wait for nothing?

THERE WAS NO MIRACLE

things spoken are absorbed by the permeable plaster like humans absorb vitamin D from the sun. she said he’s lost a bit of weight but he’ll get it back, she’s sure. written on the walls. his father doesn’t believe her but the walls won’t climb from their foundations to defend him in a court of law. no one would believe him.

lies are on the walls.

the skin of a home’s walls sags over time like human skin, age spots or wrinkles. or grows tags that need scraping or refuse that sticks like oil paint. I am thinking of Jeffrey who, in his last days, had nothing but the shit from him. I imagine he drew his truth on the walls. the walls did not resist; the walls did not recoil; the walls accepted and kept his writing for him.

the walls did not lie, abuse him with words like pig, but patiently held him in starvation.

there was no miracle.

the alley below the window is a deep hostile place. rain drops against a hollow thing, a metal pipe, or something. each drip, splash is outdone inside the head by the blood of the heart. the footfall. was there one?

senses are so plastic that the absence of the sound of the messiah’s tread means he’s stopped walking. glasses cannot see through walls. if only they could; if only walls would disappear when asked.

senses are reduced to ears. listening to silence. it becomes his waiting for whatever stopped him to stop so he can resume walking. has he already arrived or is he passing us by? does he stop because he knows I have heard him out? anxious about what it means for him to resume, I wait with blood rushing through my ears like a waterfall.

sensation is a trickster. was there a foot step at all? maybe it was just the fall of water amplified on a hollow metal thing grasped in hindsight out of context reformed as fabulous. has he come already, or not yet? 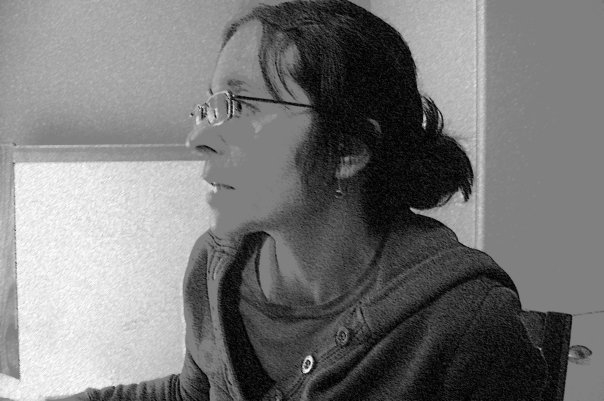 Concetta Principe‘s recent book, walking: non a nun’s diary came out with DC Books this year. Her poetry and short fiction has appeared in various literary magazines including Grain, Descant, Matrix, and forthcoming this fall, The Malahat Review and Rusty Toque (online). She is a new professor and is teaching creative writing at York University.